Congratulations to Jonetta, Jill, Erin, Bn100 and Jo-Anne, the winners in Loren's giveaway. Thank you to all who participated!
Hello Readers!

I’m Loren Mathis and I’m a new romantic suspense author.  I grew up in a rural town in eastern NC.  I went to college at UNC.  I am grateful that I’m now able to pursue my dream as a writer, and to share the characters who roam around my head with you.

Swift Strike is the second novel in my “SEAL Team 14” series.  It is a standalone novel so the first book does not have to be read in order to enjoy this installment. The SEAL Team 14 series focuses on an elite group of U.S. Navy SEALs. 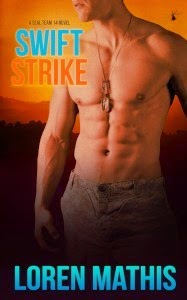 Ensign Jesse Denison and his comrades on SEAL Team 14 have a new assignment:  rescue a group of civilian hostages who have been kidnapped by a rogue terrorist cell in central Somalia. Little does he know, this seemingly innocuous rescue mission will change his life forever...

After she is rescued by Navy SEAL Jesse Denison, petroleum engineer, Lena Westlake, can’t get the handsome, brooding soldier out of her mind. Despite their intense attraction to one another, Lena doesn’t have a reason to believe that the two of them will meet again after her rescue.

NOTHING IS AS IT SEEMS

When Lena is attacked again by the same terrorist cell mere days after her first rescue, Jesse comes to realize that this terror group has a broader, deadlier agenda than just oil production disruption in Sub-Saharan Africa. An agenda that includes the acquisition of a cutting edge weapons technology developed by Lena's father...
Will Jesse be able to save the woman he has grown to love before it's too late? Or will Lena share a similar death as his former girlfriend, another woman he could not save…

Excerpt:
“Zaida ya kivuli,” the man barked out in a low, gritty voice. Jesse didn’t have a freaking clue what language the guy was speaking in. Jesse was fluent in Arabic, but the words falling out of the militant’s mouth were definitely not Arabic.

“Don’t move an inch,” Jesse commanded, raising his Sig Sauer P228 a notch higher. He repeated his directive in Arabic. It was going to be a tough shot. Lena’s head blocked all but a quarter of the shorter man’s face. “Slowly, put the knife down and step away from the woman.”

“Zaida ya kivuli,” the man recited the words again before saying the more familiar, “Allah Akbar.”

A soft anguish-filled sob escaped Lena’s lips. Her eyes widened with fear, sweat rolling down the sides of her face. Then the militant moved his wrist. The movement was so slight as to be almost imperceptible, but he was ready for it.

Jesse did not hesitate to pull the trigger. He took the head shot. The whole tragic ordeal was over in a matter of seconds.

Slumping to the ground, the knife slipped from the man’s lifeless fingers. Jesse sprinted toward Lena who’d also collapsed to the floor in the aftermath of the shot.

Dropping to his knees, he reached for her. His hands swiftly skimmed her face and neck to see if she’d somehow been injured in the shooting, checking for a heartbeat. His eyes closed in relief when he felt the persistent thudding of her pulse against his fingertips.

Slipping a hand underneath her head, he touched her shortened locks. Those assholes had apparently chopped off her hair. Luckily, she hadn’t been harmed by his shot. She was drenched in the blood and brain matter of her captor, but she didn’t have any visible bullet wounds or lacerations. She still lay unresponsive, but she had probably fainted from the stress of the situation.

“Jesse, we have got to hustle, man,” Luke intoned quietly from somewhere behind him. “We’ve got about seven minutes to make it back to surface and to the boat.”

Available on Amazon
Giveaway:
Comment for your chance to win a free copy of my book!  There will be 5 winners drawn!

For more information about my books, you can find me at:
Official Author Site:  http://loren-mathis.com
Twitter: https://twitter.com/LorenMathis7
Facebook: https://www.facebook.com/pages/Loren-Mathis-Author/555217847856621
Goodreads: https://www.goodreads.com/author/show/7145670.Loren_Mathis

Giveaway ends 11:59pm EST Oct. 18th. Please supply your email in the post. You may use spaces or full text for security. (ex. jsmith at gmail dot com) If you do not wish to supply your email, or have trouble posting, please email maureen@JustRomanticSuspense.com with a subject title of JRS GIVEAWAY to be entered in the current giveaway.
Posted by Maureen A. Miller at 12:30:00 AM