I Write Romantic Suspense…With What???

I’ve been writing suspense stories for as long as I can remember. Some of them were horrible, forever to collect dust under my bed. (Yes, I started writing in the days before computers were everywhere.) Some were revised and edited into my 1st set of novellas and some were expanded, edited and formed into my 1st full-length books. I have some hot and steamy romances with some light suspense elements. I’ve also created stories at the other end of the spectrum, with a sweet romance and an intense suspense angle. Of all my romantic suspense stories, though, none has had paranormal elements. Until now. 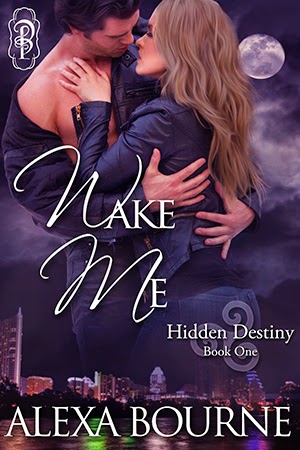 I tend to shy away from paranormal stories. The average plots, ghosts, for example, don’t appeal to me. But a seed of an idea, one completely off the beaten paranormal path I was used to reading about, lodged into my brain. As I thought more about it, I began to jot down books or movies with paranormal elements that I did enjoy: Highlander (with immortals), Outlander (with time-traveling), Terminator (with a machine killer), Evelyn Vaughn books (Goddess Grail Keepers), Supernatural (2 brothers fighting demons of the Underworld), and The Avengers (Okay, that one was mostly for Chris Hemsworth), to name a few. So when I finally admitted to myself that I might like some paranormal stories, I allowed myself to play with some possible plot ideas. It was at this time the ideas of the Hidden Destiny series came into mind.
Once I began drafting Wake Me, I got lost in the story. A woman who sees the future in her dreams? How would she deal with her ability when no one believed her? What thoughts would go through her mind when she had no choice but to try to decipher her dreams? Add to all that, how would she deal with a detective grounded in reality? The more I wrote, the more I wanted to write. Soon I started plotting new stories connected to this one, stories with other characters who struggle with different paranormal abilities. Wake Me may be my 1st story with paranormal elements, but it will definitely not be the last.

Sarah McKinley’s attempts to take her foreknowledge of crimes to the Seattle Police Department marked her as a troublemaker and were never taken seriously. Starting over in Austin, she plans never to reveal her gift, but shortly after she arrives, the dreams begin again, and the local police want to know why she has knowledge only the killer could possess.

Detective Jesse Cordell watched his mother con people with her “psychic ability” all through his childhood. He hones in on Sarah, who has means, motive, and opportunity to have murdered the victim in his current investigation. Instinct tells him she didn’t commit the crime, but she definitely knows more than she’s letting on.

Can he put aside his doubts and join forces with her, against everything he believes in, to find the real killer? Or will he do his job and put her behind bars? After all, there’s no such thing as the “psychic ability.” Or is there?

To read an excerpt: http://alexabourne.com/wake/

Giveaway:
Alexa is giving THREE prizes throughout her Wake Me Blog Tour! Leave comments in any (or all!) of the tour stops and you will be in the running! So for this stop, do you like paranormal elements in your stories? If so, how much is too much?

Bio:
Alexa Bourne is a teacher by day and a romance writer by nights, weekends, and all school holidays. She also teaches online classes for writers throughout the year. She writes romantic suspense and contemporary romance and is thrilled to have the chance to share her stories with readers everywhere.

When she’s not concocting sinister plots and steamy love scenes or traveling and exploring new cultures, Alexa spends her time reading, watching brainless TV, and thinking about exercising. Okay, she also spends way too much time interacting with readers and writers on social media sites. But don’t tell her editors! Find out more about her and her books on her website, www.alexabourne.com.

Giveaway ends 11:59pm EST Oct. 19th. Please supply your email in the post. You may use spaces or full text for security. (ex. jsmith at gmail dot com) If you do not wish to supply your email, or have trouble posting, please email maureen@JustRomanticSuspense.com with a subject title of JRS GIVEAWAY to be entered in the current giveaway.
Posted by Maureen A. Miller at 12:30:00 AM