Finding Strength in the BROKEN PLACES

Congratulations to Erin F., the winner in Krista's giveaway. Thank you to all who participated!

“The world breaks everyone and afterward many are strong in the broken places.” A Farewell To Arms

That Hemingway quote was one of the things I was thinking about when writing the plot and creating the characters in Broken Places. How do we go on after the world "breaks" us? 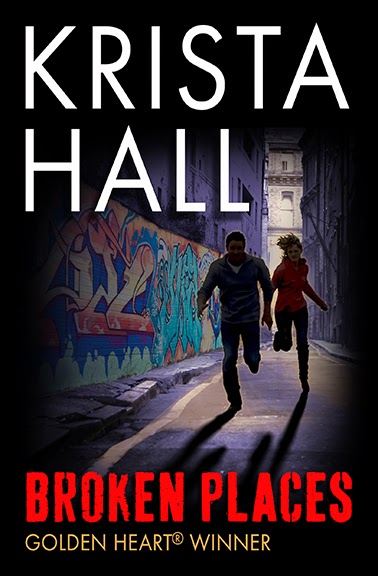 Broken Places is set in a gang-plagued neighborhood in D.C., where sociology professor Trevy Barlow spends her evenings teaching a literacy class for teen girls affiliated with gangs. After one of her students becomes the latest victim of a gang-slaying, Trevy is determined to protect the other at-risk teens in her class—even if it means endangering herself.

Throughout the story, a question Trevy struggles with is: What is her responsibility to act in the face of suffering? She's an urban ethnographer who is inserting herself into dangerous neighborhoods where she’s an obvious outsider. She is a witness to pain, suffering, violence, and injustice. How does she balance her personal doubts about the ethical implications of using people’s lives to document societal and cultural phenomena with the need to step in and do something to help the individuals she gets to know?

FBI gang task force agent Cruz Larsen grew up rough. He credits his success as a federal agent to bare-knuckled determination and a no-excuses personal philosophy. The meddlesome do-gooder Trevy Barlow pushes all of his hot buttons. He wants to shake up Trevy so she’ll “rip off those rose-colored glasses and take a good hard look at the real world. Then maybe she’d see what he saw. Violence that didn’t care about good or bad, innocent or depraved, right or wrong.” But most of all, he wants her out of his murder investigation.

When a key witness, a gang member and the boyfriend of the murdered teen, refuses to talk to anyone except Trevy, she's pulled back into the investigation despite Cruz’s best efforts to sideline her. Now Trevy and Cruz—two people with very different views on how to solve the problem of gang violence in the city—have to find a way to work together.

“Agent Larsen, I don’t know who your tagger is, but I’ll talk to Bandit. Tell me when and where.”

Securing her cooperation should have felt more like a victory, but it was a hollow one. Cruz still had one more obstacle to overcome. And it was a gamestopper. “When was the last time you saw Bandit?”

“Sunday. At the community center.” Trevy stared at him for a moment, then comprehension sparked in her eyes. “You don’t know where he is.”

“Haven’t seen him since he left the Fifth District Station. His mother said he hasn’t been home since Sunday morning. Any ideas?” And Christ, it stung to admit that to her.

She was shaking her head before he even finished the question.

“The girls in your literacy class might know where he’s hiding.”

“Forget it, Agent Larsen,” she said, each word a terse, sharp-edged slap of sound. Dr. Do-Good knew exactly where this discussion was heading.

“Why don’t you want to talk to me? Have you been threatened by someone?”

“How long do you think the girls will continue to trust me if I let you use my relationship with them to pin the murder on Bandit?” She folded her arms across her chest. He thought she was finished speaking, but then she added, “Whether he’s guilty or not.”

“Isn’t the boyfriend or the husband always the first person you look at when a woman is murdered?”

A tight jerk of his head was all Cruz could manage. So she thought he was looking for an easy target to blame for Lola’s death. Well, it wouldn’t be the first time someone had thought the worst of him. He was surprised by how much it stung.

Broken Places is $0.99 for a limited time on Amazon and Amazon UK!
Kindle Unlimited Subscribers read for free!

Giveaway:
Can a hero ever be too broken for a book boyfriend crush?
Comment below to be eligible for the giveaway: a kindle edition of Broken Places.

Thank you and happy reading!

About Krista:
Krista Hall won the 2013 Golden Heart® Award for Broken Places. She lives in the Washington, D.C. area with her husband and children and newest writing companion–a chocolate Lab puppy named Rosie.

Giveaway ends 11:59pm EST Oct. 22nd. Please supply your email in the post. You may use spaces or full text for security. (ex. jsmith at gmail dot com) If you do not wish to supply your email, or have trouble posting, please email maureen@JustRomanticSuspense.com with a subject title of JRS GIVEAWAY to be entered in the current giveaway.