Day in the Life Interview

Congratulations to "Taurus", "Jennifer" and "Kimberly", the winners in Wendy's giveaway. Thank you to all who participated!

My name is Sabrina Shaw and I used to be an assassin for a man named Goren Petrovich. But when my brother Max was nearly killed, we realized we were all marked for death. My brothers and I fled Europe the next day and now work for an agency called The Alliance. I do contract work for them where I mostly do hostage retrieval in dicey situations. It’s a challenging job, but I’m up for it. Besides, I can’t think of another occupation where I can utilize my skills. The only difference is now I only kill people who are about to kill me.

Which brings me to my most recent assignment. Truth be told, it’s not really an assignment. I choose to do this on my own. How could I refuse when I was the family’s only hope for getting their daughter back? 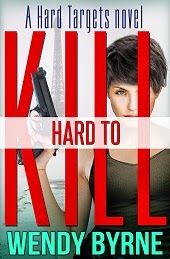 I didn’t expect to be drugged and brought halfway around the world, then chained naked to a wall. Not one of my better days. But being in tough spots is what I do best. All I need is a little opening and I can make this thing happen. I already found out that Caitlyn had been held at this place only a couple of days ago. That means I’m close. Besides, I’d already decided I would get this done, or die trying. And I’m not about to die.

But there’s this guy named Evan who works for the guy in charge. I don’t know quite what to make of him. Not that I should trust him. But maybe he can be bribed. Money is a powerful motivator for a whole lot of people.

Besides, I’m not exactly what you would call a rule-following kind of gal. I should be able to get myself out of this mess without too much trouble. I’ve been in much worse spots before. Besides, I know at least ten different ways to make a grown man beg for mercy—and not in a good way.

Excerpt from my story below:
Finally, she spotted Kane doing the fast version of the old-man shuffle. He must have gone to their agreed upon spot and found her missing. But if she got too close to him he’d be made as well. She needed to keep her distance until the men left.

She ducked into the shadow of a doorway and held her breath as the car rolled past. The rapid beat of her pulse began to pound in her ears as adrenaline combined with increased blood flow wound its way through her. When they rolled past Kane she unzipped her bag and fingered the trigger on the gun.

Even though he feigned obliviousness, she knew him better than to be fooled by his casual stance. When he shifted the pack from his shoulder to his hand, she knew he was readying to shoot his way out of the mess if need be. Still, she couldn’t help but admire his acting chops. If she didn’t know better--

The plastic bag went over head noiselessly while men surrounded her on both sides grabbing her arms and wrapping them behind her back in what felt like industrial strength bungee cords.  Her feet were lethal but not without leverage, and not without the ability to breathe. While she struggled to suck in air, a voice whispered in her ear as he pulled her along, “We’ve heard about you and aren’t taking any chances.” The sinister laugh that followed caused her mind to freefall.

Wheeze. Instead of air, plastic hit her gaping mouth. Dizziness set in as spots vibrated before her eyes. It wouldn’t be long before it was over.

Giveaway:
I will be giving away 3 copies of my ebook, Hard to Kill to commenters leaving a post or an email entry.

Trained as children to become assassins by the infamous Goren Petrovich, Sabrina Shaw and her two brothers have had a less-than-normal upbringing. After escaping his clutches, Sabrina and her brothers have tried to make a normal life for themselves. Now Sabrina works for an organization called The Alliance, specializing in the kind of jobs that no one else can or wants to do. Her current assignment: find the daughter of a prominent politician who has disappeared, categorized as a runaway by the authorities. It seems simple enough, until Sabrina uncovers the girl may have been the victim of a kidnapping that goes far beyond ransom requests. Now Sabrina must put her training to the test as she infiltrates a sex trafficking ring operating in Europe in order to find the girl…all while dodging a mysterious FBI agent and the demons from her own past.


Giveaway ends 11:59pm EST Oct. 2nd. Please supply your email in the post. You may use spaces or full text for security. (ex. jsmith at gmail dot com) If you do not wish to supply your email, or have trouble posting, please email maureen@JustRomanticSuspense.com with a subject title of JRS GIVEAWAY to be entered in the current giveaway.
Posted by Maureen A. Miller at 12:30:00 AM