The DAMAGE DONE May Be To Your Heart

Congratulations to Jonetta and Mary P., the winners in M.J.'s giveaway. Thank you to all who participated!

I love romantic suspense! It’s like double the return on your reading time investment because it gets your heart pumping in two ways. The romance plays its part in making your pulse race and so does the suspense.

First, there is an inherent suspense in romance. Will the hero and heroine end up together? (I hope you read that with your best soap opera announcer’s voice.) But, realistically, you say, we all know there is a happily ever after coming. Where’s the suspense in that? The suspense is in how they get together. The odds should seem pretty insurmountable at times and you should be wondering, “How are these two ever going to work this out?” The romance part of the story also gets things humming with its scintillating sex scenes. Even if you’re a PG author, the emotional level of your intimate scenes should be high. The breakup scenes and proposal scenes should get you revved up, too.

Running side by side, you have your suspense story. Bad things are happening. Your hero and/or heroine are in danger.  This alone should keep you turning pages. After all, if you don’t read, they may never get out of the dark place the author put them. (Ever feel guilty for closing a book when the characters are in jeopardy? It’s kind of the same premise as your team losing because you didn’t watch them.)  The suspense rises throughout the book. Crime scenes become more gory or spooky. The killer gets closer and closer to the characters, outwitting them at every turn. Terror drives your hero and heroine into each other’s arms…and then you’re back to the romance. See how nicely the parts of the story work together?
I hope I have made my readers anxious for my characters in this way in my new romantic suspense,  DAMAGE DONE.  It’s a story told in two parts, one about Teddy McKee, his love, Gabrielle, and his best friend, Sean; the second, fourteen years later, about Teddy’s son Michael. Though separate stories, they circle around and are tied together by the suspense plot line in the end. 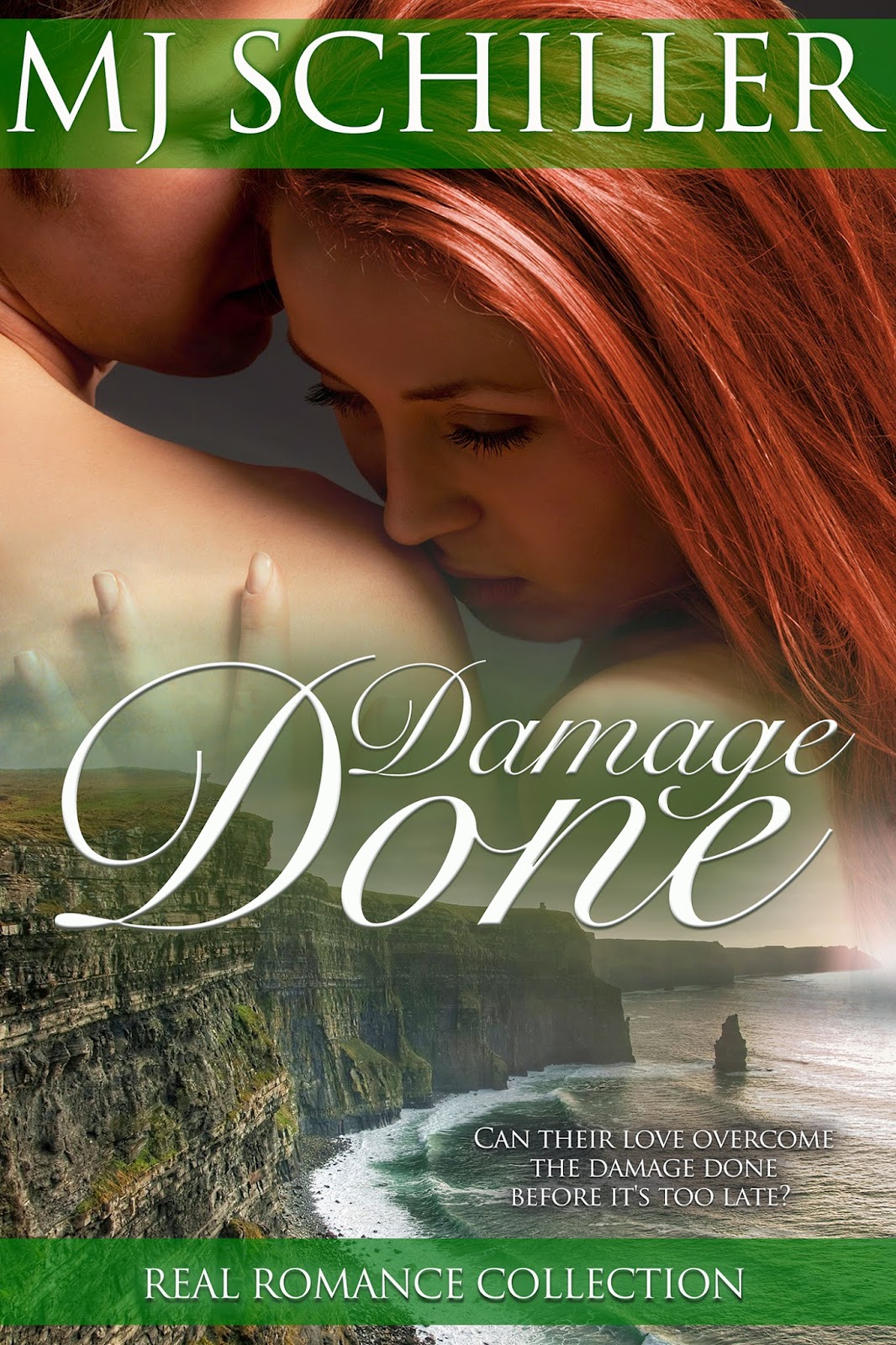 When an unhappy youth leaves him damaged, will Teddy Mckee be able to find love?

“Teddy Passmore McKee was born in Cork, Ireland, with a limp and a chip on his shoulder that threw his balance off all the more.” When he falls in love with the dark haired beauty born of an Irish father and a Spanish mother, will Gabrielle Quinn be able to restore his balance? And what about the charming Sean Hennessey? When Gabby catches his eye, too, will Teddy’s playboy best friend cause his own damage?

Fourteen years later, will Teddy and Gabrielle’s son be able to overcome the damage done to him in his childhood?

“Even through bloodshot eyes he could see she was different.”  But can Michael leave behind the bottle, and his womanizing ways, to win over the lovely Tess Flanagan? Tess has sustained some damage of her own. Can she and Michael overcome the terrors of the past and learn how to love each other?

And if they do, will they be able to elude those after them who want to create their own damage?

On the run after an altercation leaves their boss in a pool of blood, will Michael and Tess be able to stay one step ahead of their pursuers? Or is it simply too late to correct the damage that has been done? 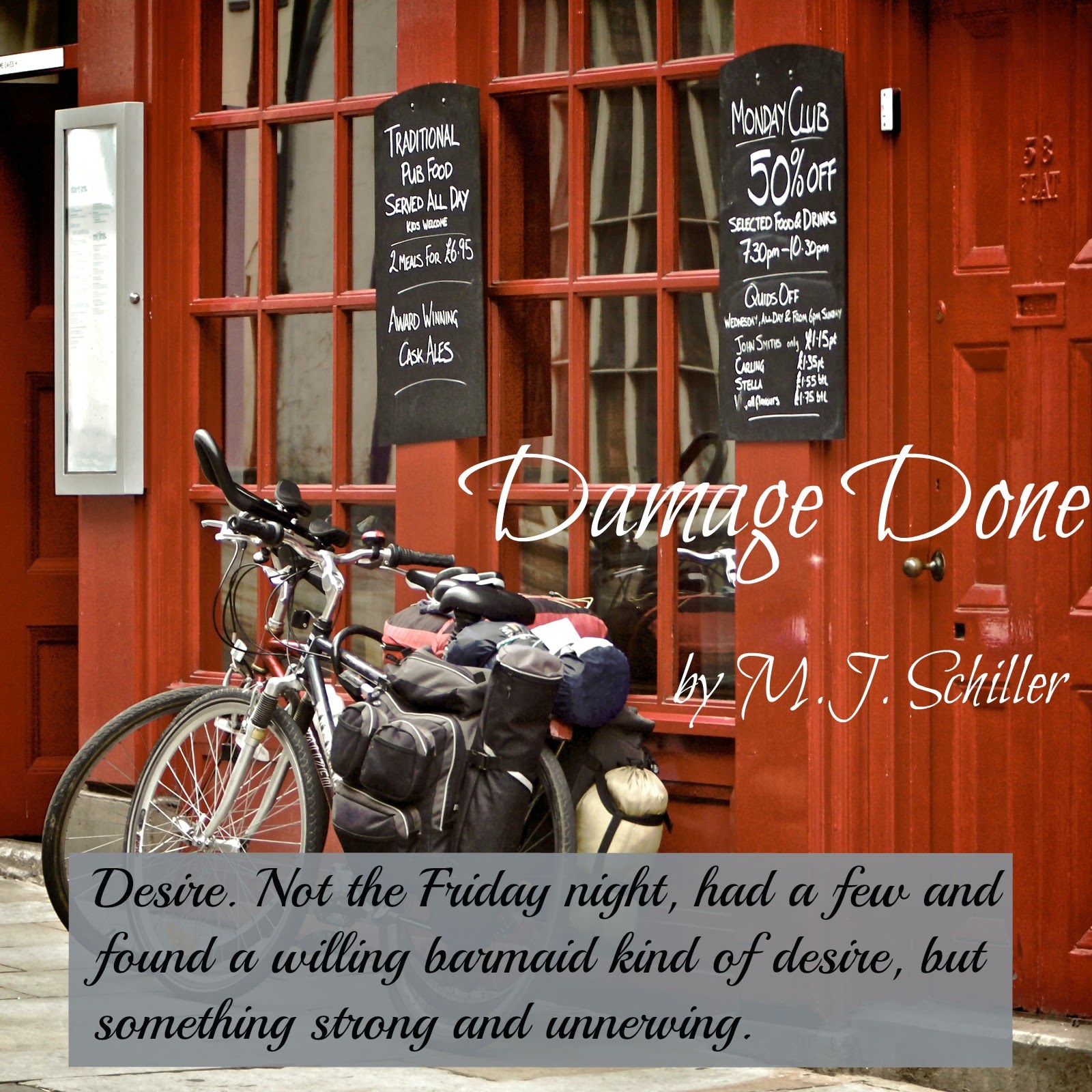 EXCERPT ~
“Tessie…” He offered again. “We have to get out of here.”

She remained frozen in her spot, staring blindly over the cliff. He moved a step closer and gently grasped her elbow. “Tess—”
She whirled around and his heart caught in his chest as he stared into her wild green eyes. Tears shone on her damp cheeks, glimmering in the moonlight like trails of scattered diamonds. “Nay, Michael,” she said, her words coming out choked. “I have to tell them the truth. It’s my fault. …I k-killed him.” She sobbed.

He looked at her sadly, begging her, “Let me help you.”

The back door creaked open and light spilled out from the bar across the grass, startling them. He saw Jimmy Flynn’s outline in the doorway. “They’re out here!” he yelled.

Without waiting for a response, Michael took Tess’s arm and steered her along the cliff’s edge. He stepped over the railing and helped her to the other side as well. They stood on a narrow ledge. To the left a trail dropped off toward the sea. He led her skittering down the path, loose rock pebbling the beach far below. He had taken the pathway many a night when he was drunk and feeling particularly reckless. Tonight he hurried over it with only self-preservation and Tess’s safety in mind.

They heard voices above them, coming from every direction as searchers fanned out along the top of the cliff. Their eyes met. They hardly dared to breathe. A flashlight beam ventured over the railing and along the cliff face. She clutched his hand, squeezing it until he lost feeling in his fingers. He tried to flatten himself even more tightly against the rock face, wishing it would somehow melt and absorb them. Several seconds passed and the beam of light was joined by another, and another, each swinging away, and then toward them again.
He grabbed a quick look at the churning sea below then closed his eyes for a second, and his stomach dropped. 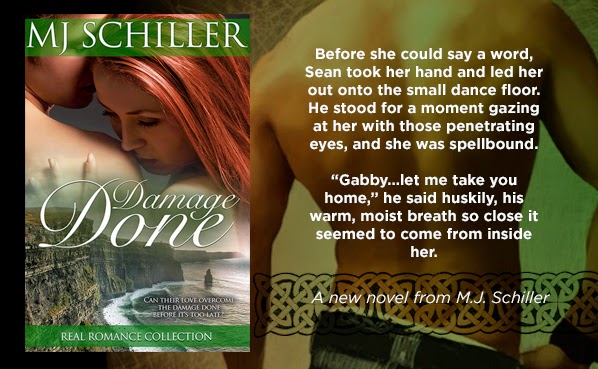 BIO ~
MJ is a lunch lady in the heart of Central Illinois. My gosh! Can you get more folksy than that? She met her husband at the University of Missouri-Columbia and now she has a nineteen-year-old (how did that happen?) and seventeen year old triplets! She loves to read, karaoke (where she can pretend she is a rock star) and spends WAY too much time on Facebook. She grew up in St. Louis and still has family there.


You can find DAMAGE DONE at:

Giveaway:
Author M.J. Schiller will give away an ebook, of the winner’s choice, from her REAL ROMANC E COLLECTION to two winners. To be entered, just leave a comment below. If you’d like, you can answer one of the following questions:

1) What is it about romantic suspense that you like?
2) What is your favorite romantic suspense novel?
3) Have you ever been to Ireland?
4) When was the last time you were on the run for your life? (Just kidding. We don’t want to know!)

Giveaway ends 11:59pm EST Oct. 14th. Please supply your email in the post. You may use spaces or full text for security. (ex. jsmith at gmail dot com) If you do not wish to supply your email, or have trouble posting, please email maureen@JustRomanticSuspense.com with a subject title of JRS GIVEAWAY to be entered in the current giveaway.