Congratulations to "Trish J." and "TiDubb", the winners of Susanne's giveaway. Thank you to all who participated!

Hello! It’s great to be here with Maureen and the Just Romantic Suspense followers once again. This summer has been a hectic one for me with the release of Echoes of The Past in July and On His Watch on August 18th.  I know there are 24 hours in a day, but I’m beginning to think those seconds are closer together than they used to be because time seems to fly by far too quickly these days.

When I was considering my post today, I batted around a number of different topics, but someone asked me a question last week, and I thought I’d answer it for this month’s post:

“How do come up with all those different ideas?”

Surprisingly, there isn’t an easy answer to that question. Ideas come from everywhere—television, the news, people watching, things you hear and read—you name it. When I start to think about my next story, I usually have the character names in mind and sometimes I even have a title. Most of my stories have been triggered by specific events, For example, the basic idea for Fire Angel came from a number of unsolved arsons in the area and a grease fire that destroyed a local restaurant. As I researched arson and fire, my killer took shape in my mind. I felt anyone who purposely killed with fire had to be unhinged.

The idea for In Plain Sight, my second romance suspense novel, came to me when I had to play Mary Magdalene in a Good Friday play in our church. The pink and white robe just begged to be used in a novel. Around the same time, a huge drug and illegal weapons bust took place in the area—did I mention I live in a Canada-US border community where smuggling is a definite problem? Rumors had it that these guys weren’t local people out to make money, but were actually connected to the mob and someone had squealed. So, why not write a book about a woman hiding from the mob after ratting them out? And wouldn’t it be nice if she were a singer, too? Those thoughts gave birth to Misty, the songstress heroine of the story who wears a pink and white striped robe when she plays Mary Magdalene in a small town recreation of Jesus Christ Superstar.

The inspiration for Echoes of the Past came from the Lake of the Mountain and the Mohawk legend associated with it. Since illegal drug production and drug abuse are constantly in the news these days, I thought using a meth lab dumping its toxic waste in the pristine, sacred lake was an excellent fit. And if I could throw in murder and a ghost or two, why not?

On His Watch came to me in a slightly different way.  I read that some publishers were looking for novels about amnesia victims. That got me thinking. Since I enjoy writing suspense novels, what could cause a person to suffer severe retrograde amnesia? Some answers included surviving a bullet wound to the temporal lobe, a car accident, a serious beating, an attempted murder that failed, and brainwashing. I chose the serious beating/attempted murder scenario, and added my own unique twist, another imperfect hero. So how to do it? Once more good old reality came to my aid with a news story of a vicious home invasion. There it was. My story, signed, sealed and delivered.

So, what’s my next crime going to be? I’m not sure. So far, I’ve got three more novels written, and they should all be released within the next year. One involves a crazed stalker, determined to destroy the life of his idol and everyone he loves, another deals with a cult leader bent on creating his own super race using suitable female vessels and discarding them once the children are born, while the third involves an accountant who accidently stumbles onto her boss’s second set of books. Stay tuned to Just Romance Suspense for more about these future releases. 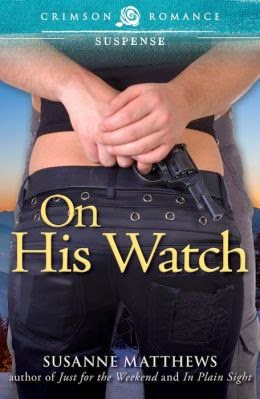 What starts as a quiet evening alone watching football turns into the night from hell for FBI agent Jason Spark, who is covering sheriff duties for his honeymooning brother. He thought the 911 call was a butt dial but instead stepped into a bloodbath, complete with writing on the wall. It’s a scene straight out of a slasher movie—a dead physician, his son, and his wife so badly beaten, it’ll be a miracle if Nikki Hart survives.

When Nikki Hart awakes from a coma, she’s terrified. She doesn’t know her name, recognize her face, or remember anything about herself and her past. She clings to the memory of the angel who comforted her in her darkest moments, but no one in the world she wakes up in resembles the good guy.

Evidence in the case leads Jason to The Butcher, a hired assassin usually contracted by the Sicilian mob, a man who doesn’t quit until the job’s done. News of Nikki’s recovery puts her in the killer’s sights again. Jason will do whatever it takes to protect the woman he’s learning to love. But can he save her from a vicious killer intent on earning his million dollar fee and his employer bent on revenge?

And when the smoke clears, can Nikki ever forgive the secret role he played in her injuries?

Excerpt:
Her upper body was on fire. Danny! Mandy! She swallowed her cries and slid to the floor, trying to stop herself from placing the full weight of her body on her abdomen, her right hand slipping into her pocket and silently pressing nine-one-one on the phone. She kept her hand over the small screen to hide its glow. Breathing was agonizing.

With what little strength she could muster, she pulled herself across the glass and juice-covered ceramic floor until she was close enough to touch her son’s lifeless hand, tears of pain and sorrow running down her cheeks. I’m so sorry, sweetheart. She reached out her left hand, stretching to touch his face but couldn’t manage it. She groaned.

“What the hell? Leroy, I told you to kill her, not just cut her. She won’t bleed out from that wound. The boss said no survivors. There should be another kid in the house. Go and look upstairs. I’ll take care of this.”

She tried to turn her head to look at the man speaking, see if she recognized him, but he placed his boot on her head, forcing her face into the blood-covered floor.

“It’s nothing personal, Mrs. Hart. For some reason you need to suffer, or I’d cut your throat, too, and make it quick. Everyone has to die sometime, and today’s your day.”

Something pierced her lower back, sending wave after wave of excruciating pain through her body, and her unborn daughter kicked in protest. Nikki fought to suppress the scream of agony for Mandy’s sake. Blackness edged around her.

Please God, don’t let him look for her under the guest room bed. If she doesn’t wake up, she’ll be safe under there, won’t she? Sam! Oh God, Sam.

As if the sound were coming from far away, she forced herself to open her eyes and turned her head to face the door. Heavy boots entered the kitchen. She looked up. Instead of Sam, a man dressed in camouflage pants and matching jacket—the kind of thing a hunter might wear—stepped into the room and closed the door behind him. He had blood on his blue, latex-gloved hands. Sam wouldn’t be able to save them.

She forced her eyes to stay open and stared at the third man. He was bald, with thick, black eyebrows, and a diamond earring in his left ear. His face and head were badly scarred. His lips were thin, and he smiled cruelly.

Giveaway:
Susanne will be giving away a digital copy of ON HIS WATCH to two readers leaving a comment or email entry.

Giveaway ends 11:59pm EST Sep. 5th. Please supply your email in the post. You may use spaces or full text for security. (ex. jsmith at gmail dot com) If you do not wish to supply your email, or have trouble posting, please email maureen@JustRomanticSuspense.com with a subject title of JRS GIVEAWAY to be entered in the current giveaway.
Posted by Maureen A. Miller at 12:30:00 AM