Congratulations to "Willa", the winner in Kay's giveaway. Thank you to all who participated! 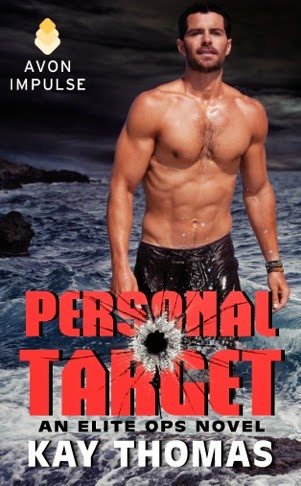 It’s great to be here today at Just Romantic Suspense to tell you a little about my new release in the Elite Ops series. At its core, my new book is about a case of mistaken identity and a very personal vendetta. PERSONAL TARGET takes a former SEAL/CIA operative from Dallas to Mexico, across the African Savanna, to the shores of the Mediterranean in a race against time to save the woman he loves.

Did you ever realize that you’re about to make a mistake as it happens? Yet, even knowing you’re about to screw up, you go forward anyway because not going forward exposes you in some way—either emotionally or physically—that’s just too scary to handle? The scene I’m sharing is about that kind of experience. I knew as I wrote it that the heroine, Jennifer, was making a mistake. She knows she’s making a mistake as well. She’s just survived a harrowing experience. She knows she should stay put in order to stay safe. Yet her fear of staying with Nick—the man who broke her heart years ago—that fear of exposing herself to being hurt by him again overrides everything.

While I didn’t want Jennifer to look like the dreaded “too stupid to live heroine,” I also knew that none of us sign up to willingly have our hearts stomped on. Most of us will go to any extreme to avoid it, even making unwise choices in the process. Jennifer is no different from us in that regard. So she argues for going forward to protect herself emotionally, and in doing so, dives headlong into danger physically before she realizes what she’s done.

Excerpt
“You’re just trying to scare me,” Jennifer said. “The area of Niger I’m travelling to is perfectly safe. I’ll be fine. We’ve hired Tuareg guards for the digs. They’re excellent at security. I’ve gotten all the approvals from the Niger authorities.”

“Which means you’ll be fine unless someone tries to take over the government, which seems to be happening in that country every other month.”

Arguing with him was pointless, and the only other option—not going—was unthinkable. She didn’t answer as he pulled into the driveway of her small rent house. The pansies she’d planted out front by the porch steps as therapy a week ago were wilting in the unusual Texas December heat, a visual aid for how she felt herself.

Nick turned off the ignition. “I’m not trying to scare you. I’m just trying to show you this situation in a realistic light. The cartels control anything and everything they want over there.”

He was out of the car and opening her door before she realized it. How could he argue and display those impeccable manners that melted her at the same time? She grabbed her keys and slung her trashed purse over her shoulder, cross-body style.

“Why in the world would they care about me?” She walked away from him, climbing the porch steps and moving to open the front door. “I’m not anyone important.”

He sighed. “A person’s influence, whether great or small, doesn’t matter. You’re an American. That makes you newsworthy and a target for robbery, kidnapping, or publicity for their ‘cause.’”

She crossed her arms and stood at the front door, glaring at him. She couldn’t back down, not now, even if everything he said was true. She’d just be extremely careful. Paleo-Niger and the Foundation had excellent safety protocols in place. She’d be fine.

“I don’t want to talk about this anymore. I just want to get inside my house and put on my own clothes. I appreciate your getting me out of Mexico. Really, I do. But your work is done. Go spend the holiday with your family. I don’t want you in my life.” That seemed harsh. And yes, it was a bald-faced lie, but she was going with it.

“I’m back, I’m home. I’m safe. I’m fine. And I’m leaving, so I won’t be any more trouble to you. I’m starting a new life, just like you did when you joined the Navy. We have nothing to do with each other anymore. Can’t you let me go?” She hadn’t meant to say that last part. Hadn’t meant to reveal quite so much.

“No, I can’t. I never wanted—” He stopped talking abruptly, as if to keep himself from saying more.

“I still think you’re just trying to scare me,” she muttered under her breath. She was not having this conversation. She couldn’t. Not now when she was so close to a clean getaway. Talking about this would lead to her telling him everything, when she was moments from never having to tell him anything.

She put her key in the lock, determined to go inside and shut the door behind her. But a key wasn’t necessary. The door swung open of its own accord.

Copyright © 2014 by Kay Thomas. All rights reserved under International and Pan-American Copyright Conventions.

Back Cover Book Blurb:
A former SEAL and Black Ops specialist who left the CIA, Nick Donovan gave up a life on the edge to work in the private sector. But that didn’t stop his enemies from coming after him, or his family. In a case of mistaken identity, a drug cartel kidnaps his sister-in-law’s best friend…a woman from Nick’s past.

One minute Jennifer Grayson is housesitting and the next she is abducted to a foreign brothel. Jennifer is planning her escape when her first “customer” arrives. Nick, the man who broke her heart years ago, has come to her rescue. Now as they race for their lives, passion reignites as old secrets resurface. Can Nick keep the woman he loves safe against an enemy with a personal vendetta?

PERSONAL TARGET is now on sale at online retailers for $1.99. On September 2 it will be available in print.

Giveaway:
For a chance to win an e-copy of any book from my backlist or frontlist—winner’s choice—answer this question:

How do you find new authors: browsing, recommendations from friends, book lists, Twitter, Facebook, Goodreads, some other way not mentioned here?

Check out my Rafflecopter, for a chance to win a beautiful Pride and Prejudice Infinity Scarf!