Raise your hand if you like diamonds? How about a gorgeous and rare blue diamond? Wouldn’t it be nice to own such a gem? Hmm, maybe not, if an alleged curse is associated with that stone.

The historic Hope Diamond, housed at the Smithsonian Institution in Washington DC, has just such a curse. The stone’s owners through the centuries experienced unfortunate events in their lives, including death by violent means. Remember Louis XVI of France and his queen, Marie Antoinette? They lost their heads.

I have always been fascinated by beautiful gems, especially the transformation from dirt-encrusted rough fresh out of the ground to brilliantly sparkling cut and polished jewels. Bling with a big price tag. After reading about the Hope Diamond in Susanne Steinem Patch’s Blue Mystery: The Story of the Hope Diamond, I began to wonder if the Hope could have one or more sister stones, diamonds cut from the same original rough as the Hope. Being a writer of fiction, I decided to make that happen in a romantic suspense story that features a gemologist who is receiving anonymous threats, a federal agent with a painful past, and a blue diamond that might just share the Hope’s curse. 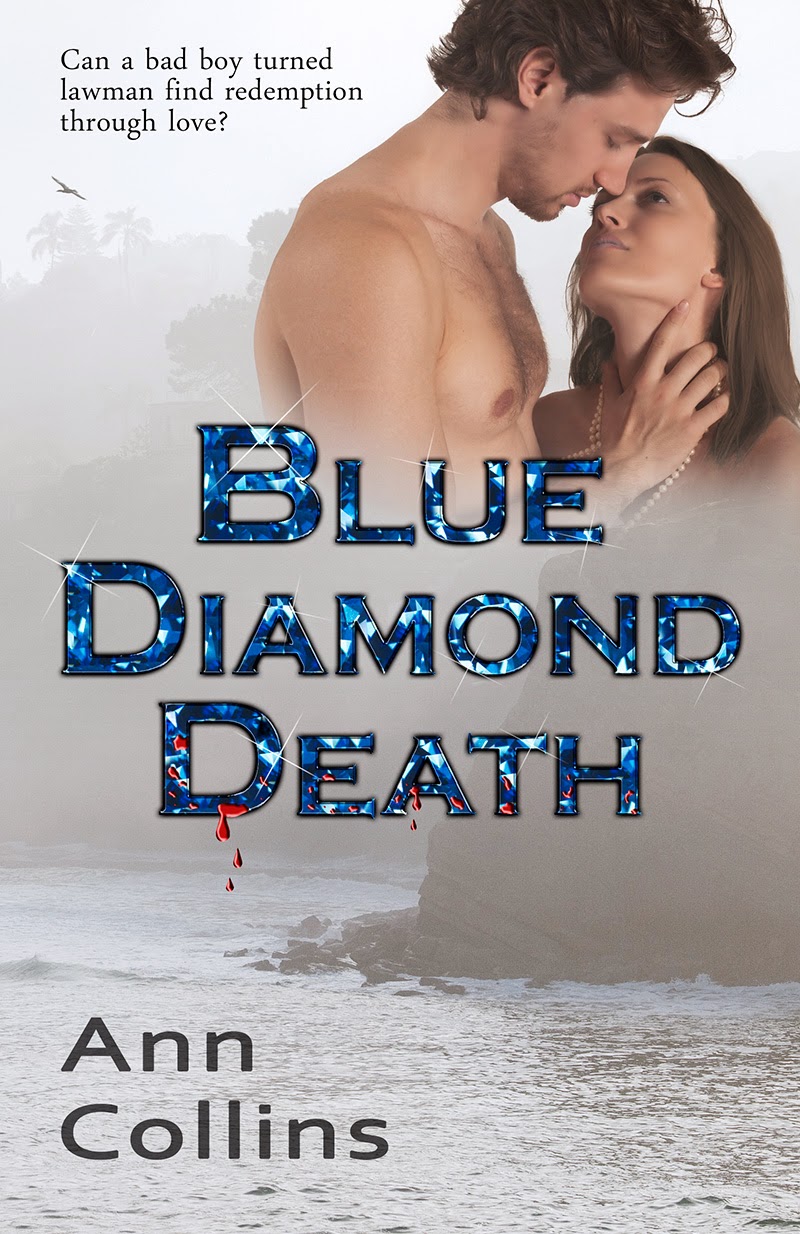 A woman in danger:  Gemologist and jewelry designer Kathleen McGuire has no intention of falling for another man in law enforcement—a man who wants to be her hero. Her shattered heart cannot endure any more pain. But anonymous threats against her life push her to the brink, and she reluctantly accepts the help and protection of handsome Mike Ryan, a federal agent with U.S. Immigration and Customs Enforcement (ICE). Though attraction sizzles between them, Kathleen fights temptation and desire. She is a long-term relationship kind of woman, and Mike is a short-term commitment kind of guy—until one night changes everything.

A man who vows to protect her:  Working a drug-related money-laundering case in the sun-drenched seaside community of La Jolla, California, Special Agent Mike Ryan needs a confidential informant familiar with the jeweler he’s investigating. Beautiful Kathleen McGuire isn’t who he had in mind for the job, but what she knows could break his case wide open. Arresting drug traffickers and their scummy, money-laundering partners is a mission to Mike, but when a stalker’s threats against Kathleen escalate, Mike makes protecting her his priority. Before long, he finds himself emotionally entangled with Kathleen, his heart and his future in as much danger as Kathleen’s life.

Blue Diamond Death, a sensual contemporary romantic suspense novel, has approximately 64,200 words and is about 265 pages in length. It is available as a print-on-demand book at Amazon.com (http://amzn.to/1kMyPRq) and an e-book from the following retailers: Kindle US (http://amzn.to/1qwZ4mX), Nook (http://bit.ly/1sFVqXD), and Kobo (http://bit.ly/1trpJyG). It will be available soon from iBooks.

About the Author:
Ann Collins was born and raised in La Jolla, California, the setting for Blue Diamond Death. Some translations of La Jolla are said to mean “The Jewel,” which she felt would be the perfect name for her story’s fictional jewelry store. As a child, Ann enjoyed and admired rocks, graduating to geodes and then fine gems. She has seen diamonds being cut in Amsterdam and pearls being sorted in Japan. Two gemology highlights during her world travels were the Crown Jewels in London and the Hope Diamond and other gems at the Smithsonian in Washington DC. Ann writes fiction and nonfiction. She enjoys bringing La Jolla and San Diego to life for her readers. She has published a historical romantic suspense novel entitled A Matter of Marriage, set at the Hotel del Coronado (Hotel Grand Victoria in her book) in the late 1800s. Her first historical romance novel, Protecting Jennie, was published by Harlequin Enterprises, won the romance category of the San Diego Book Awards, and received four stars from Romantic Times Book Reviews.

Ann’s creative outlets also include nature photography. She especially enjoys shooting landscapes and seascapes. She will have two images in the 2015 Sierra Club Wilderness Calendar. To read more about Ann, please visit Compass Point Press or her photography website, Images By Ann Collins. To connect with Ann on Facebook, please go here (Facebook.com/AnnCollinsAuthor). Ann is also on Goodreads.