BIRTH OF A SERIES

Congratulations to "Bn100" and "Brooke B", the winners in Susan's giveaway. Thank you to all who participated.

My romantic suspense novels usually feature a law enforcement hero or heroine, and the other in the romantic pair will be an ordinary person forced into extraordinary circumstances, life or death situations. I love torturing my people—virtually, you understand—and making them face all sorts of dangers and decisions that also draw them together and challenge their beliefs and needs. I love building the tension between them, so they’re hot for each other but circumstances or their own fears make them hesitate.

This is exactly what I’ve done with my characters in Task Force Eagle. DEA Agent Rick Cruz, the hero of Never Surrender, appeared as a secondary character in my first book for Harlequin. Ever since, readers have asked when I was going to publish his story. It took years, but finally I found the perfect heroine and a story that would challenge him and his task force partners. I added ATF Agent Jake Wescott and DEA Agent Holt Donovan to the task force and the series was born. 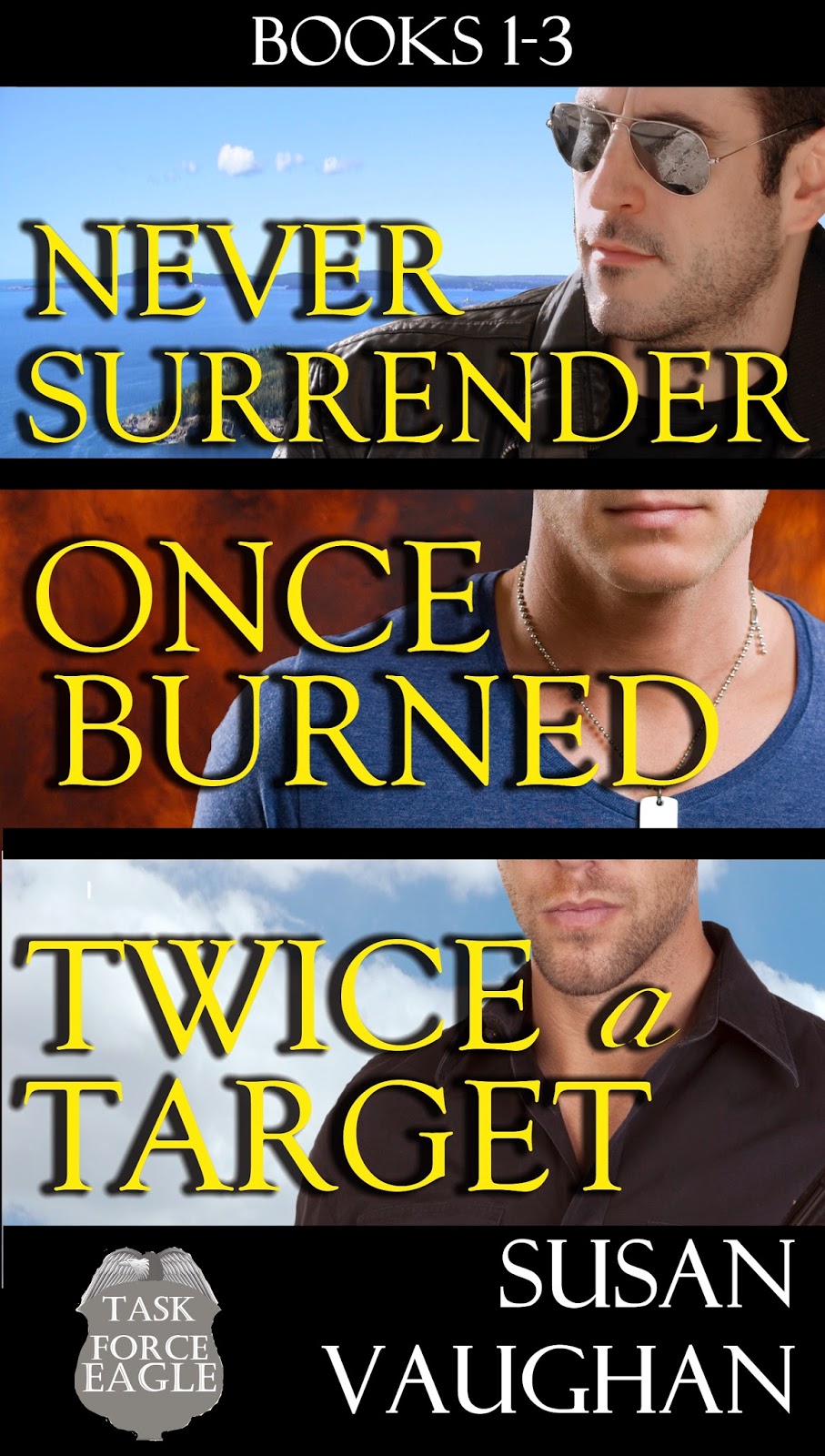 NEVER SURRENDER  - When charming DEA Agent Ricardo Cruz has a lead in Maine to the cartel that killed his brother, his vanished suspect’s loyal sister, the beautiful Juliana Paris, refuses to cooperate. Threats force her to accept Rick’s protection, and their search leads them into deadly danger and each other’s arms.

ONCE BURNED - ATF Agent Jake Wescott, undercover in his hometown to find a link to the Mexican smugglers, becomes the reluctant protector of Lani Cameron who was scarred in the long-ago fire that killed her twin. As they uncover secrets, intimacy ignites passion, and they face dangers more explosive than they feared.

TWICE A TARGET - Disaster hits DEA Agent Holt Donovan twice. A gunfight ruins his mission and a car crash kills his brother and sister-in-law. Home on the Colorado ranch to raise his orphaned nephew, Holt hires a nanny, Maddy McCoy, who once jilted his brother. Can danger and a shocking discovery bring them together?

The agent regarded her with professional suspicion. Mocking her efforts at cool control, her cheeks burned under the scrutiny. She made a production of stashing the flashlight, cracked and probably useless, in her bag.

“I suppose you’re who you say you are, but what are you doing in my brother’s apartment—in the dark?” Straightening to her full five-foot-three, she folded her arms.

“Your brother.” The DEA agent rubbed his knuckles on his jaw. “Can you prove that Jordan Paris is your brother?”

She would not be reduced to jelly by a good-looking man with a sexy voice. “Prove? Not really.” She rummaged in her bag. “But here’s my driver’s license.”

Agent Cruz didn’t take the license from her, but framed the hand holding it with his own. “Portsmouth, New Hampshire? You drove here this afternoon?”

He continued to grip her hand. His tanned fingers contrasted starkly with her pale redhead’s skin. When he released her, she snatched back her hand as if from a flame.

“Sometimes Jordan forgets to pay his electricity bills. My brother has issues but he’s no criminal.” For the first time, the condition of the room registered. Everything strewn around. One hand flew to her throat. “What’s going on? What have you done?”

“First explain why you’re here and what you know about Jordan’s recent activities.” He gestured for her to take a seat.

Until he sat, she would stand. She wasn’t about to have him looming over her. “I’m not sure what Jordan’s been up to lately. That’s sort of why I came.”

“You must know where he works.” His gaze concealed whether he knew the answer.

“Until two months ago, he worked for Vinson Seafood on a dragger. When the boat went in for repairs, he was laid off. He’s been out of work since.”

Juliana wished he wouldn’t keep looking at her with such concentrated focus. It was unnerving. She licked her lower lip.

As if too warm, the agent threw off his windbreaker. His black flak vest emblazoned with the yellow letters DEA confirmed his status. His black turtleneck and pants displayed a trim yet powerful build. With a cape, this man would make a better Zorro than that Spanish actor. No, she wouldn’t think of him that way. She blinked away the image.

Giveaway:
I am giving away 2 digital copies of the Task Force Eagle bundle to two lucky readers posting a comment or sending an email entry.

BIO
Susan Vaughan wanted to write as soon as she learned to read. Her favorite books have always been mysteries and romances, so the mix in romantic suspense was a natural. Her books have won the Golden Leaf, More Than Magic, and Write Touch awards and been a finalist for the Booksellers’ Best and Daphne du Maurier awards. A former teacher, she’s a West Virginia native, but she and her husband have lived in Maine for many years.


Giveaway ends 11:59pm EST Aug. 28th. Please supply your email in the post. You may use spaces or full text for security. (ex. jsmith at gmail dot com) If you do not wish to supply your email, or have trouble posting, please email maureen@justromanticsuspense.com with a subject title of JRS GIVEAWAY to be entered in the current giveaway.
Posted by Maureen A. Miller at 12:30:00 AM