What Happens When I play What Would Happen If?

Congratulations to "Janice H", the winner in Nancy's giveaway. Thank you to all who participated.

Thank you, Maureen for having me back for a visit on Just Romance Suspense. I love spending time on JRS as a reader and as an author.

Being a romantic suspense author can be such fun sometimes because I get to sit in my writer’s cave and play an exciting game I call, What Would Happen If--- or WWHI for short.

I actually use WWHI as a tool to stir my imagination before beginning my next novel. I usually have a plan for my hero and heroine and understand the internal conflicts that keep them apart. WWHI comes in play and helps me to create the suspense element in the story. It’s that external conflict which deepens the friction between my couple while pulling them apart until it appears they will never find their happy-ever-after.

So how does WWHI work?

I began my newest novel ‘In the Shadow of Pride’ by scouring news articles and real life case in the FBI news blog for potential games pieces. One day, the words Unmanned Aerial Vehicle popped off the page. Drones! How fun would that be?

I disappeared into my writer’s cave and had some fun. I knew my hero was going to be a bad-ass FBI agent. What would happen if I placed a drone in the hands of a radical group whose aim was to keep our borders closed? And, what if I had my antagonist, the leader of this group, place all the blame for his nasty activities at the door step of a beautiful, spit-fire single mother who hates everything about the FBI as well as my hero, the only man who can protect her?

Great conflicts make great stories. Playing my WWHI game challenged me to come up with intriguing ways to force my couple together when it was the last thing either of them wanted. And I have to say answering the two WWHI questions kept me happily working in my writer’s cave for hours a day.  I loved every minute of writing In the Shadow of Pride. Throwing my gorgeous FBI Special Agent Mac McNeil and my spunky heroine Lexie Trevena into life altering situations, making them work through their animosity toward each other and then watching them fall in love on the page is what makes being an author such a joy.
Have questions? I would love to answer them. Feel free to ask me anything and you will become eligible for a drawing for an autographed book from this series--your choice. By the way, my ‘In the Shadow’ series can be read out of order.  I hope you will enjoy both the blurb and excerpt below. It was great fun visiting with you.

IN THE SHADOW OF PRIDE

Lexie Trevena buried her murdered husband, discovered he had cheated on her, and adopted his newborn son—all before noon. Now she just wants to raise her child in the loving, supportive home she never had. The last thing she needs is another man to complicate her life, but her best friends feel differently. Their matchmaking meddling accidentally places Lexie smack in the path of a terrorist who intends to use her as his pawn. 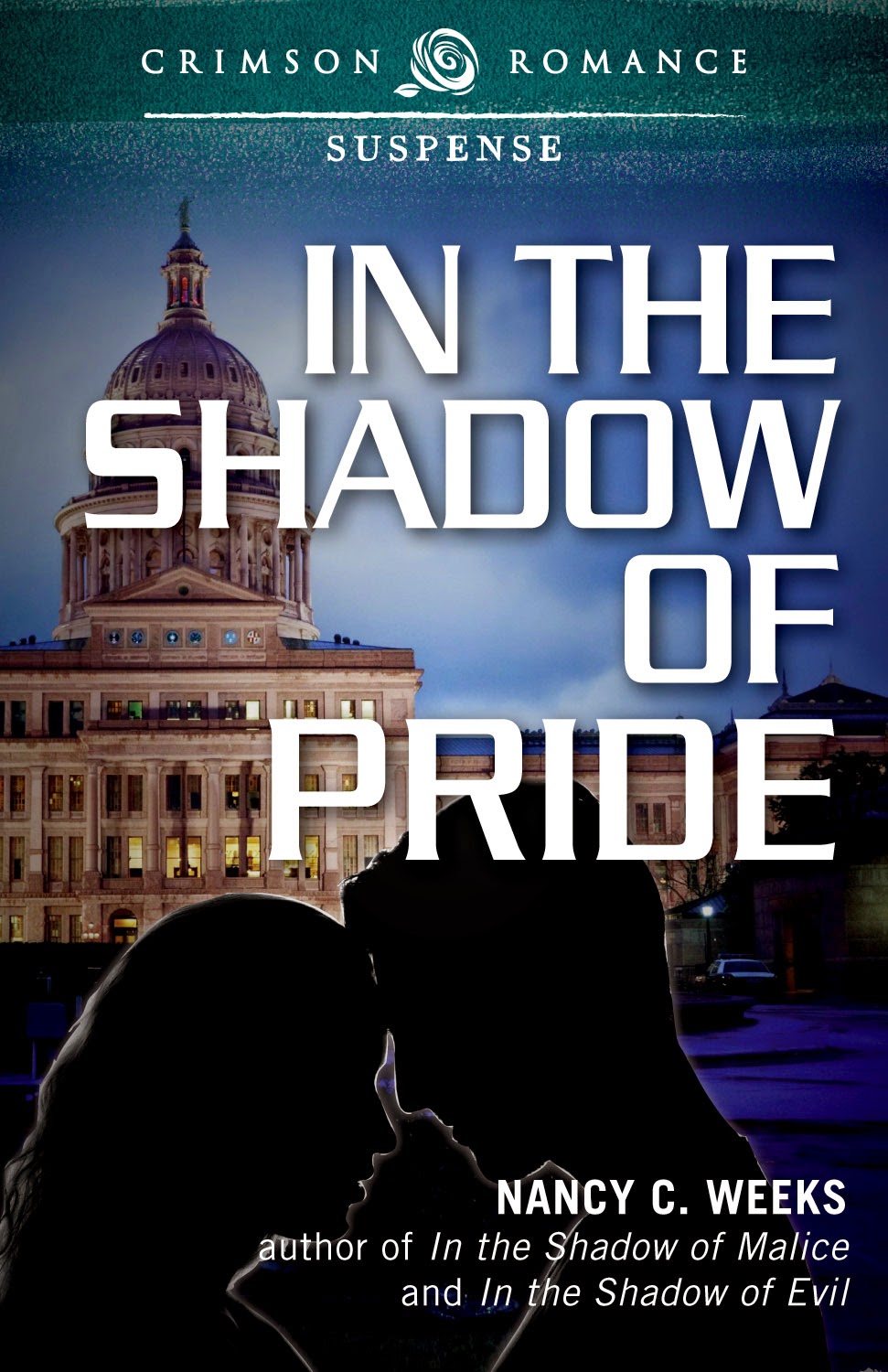 The only person who can help her is the FBI agent she holds responsible for her husband’s death.

Special-Agent-In-Charge Luke “Mac” McNeil watched his best friend and partner marry a woman he knew was too good for him, but he did nothing to stop the wedding. He stood by as Lexie adopted the cheating jerk’s son. But when someone goes to great lengths to make it appear that Lexie is responsible for launching a drone into the home of a prominent Texas senator, Mac’s conscience finally speaks up, and he fights for Lexie’s freedom ... even though all the evidence leads to her door, and she has never given him a reason to trust her.

Can Lexie and Mac find the courage to forgive and trust, or will their pride stand in the way of love, allowing terrorists to bring another devastating attack onto United States soil?

Excerpt for IN THE SHADOW OF PRIDE

Lexie leaned her back against the cool stone and made herself release Mac’s hand. She then took a breath of fresh, clean air and tried to hide the shakiness in her voice. “Now what?”

“I’m going to drop down to the roof. You will kneel on the ledge and, using the window to balance, turn so your legs hang over the edge. Let go of the ledge, and I’ll catch you.”

“Lexie, look behind you.”

She turned her head slowly toward the open window. Flames appeared under the door and the small office was completely filled with smoke. One word escaped her lips. “Trapped.”

“Once we get down onto the roof, there’s a fire escape ladder to the street.” He reached for her hand. “Gabriel needs you. We can do this together.”

Finding her voice, she whispered, “Not fair using Gabriel.” She bit down on her lower lip and dredged up an ounce of courage. “Mac, do what you have to do.”

With the grace of a trained athlete, he lowered himself over the side until only the tips of his fingers were on the ledge. An instant later, he dropped, landing on his feet.

Lexie’s heart pounded like she had just run the 100-yard dash. After a quick glance into the office, she knelt, and holding onto the window, rolled onto her stomach.

“That’s it. Now just ease your legs over the ledge.”

The instant her feet hit empty space, panic ripped through her and she swung a leg back onto the ledge as her fingers dug into the window frame. God, she couldn’t do this. It was freaking crazy.

“You have to let go of the window frame. I’m right under you.”

“Okay, then how’s this? I’m loving the view of the sexiest red panties I have ever seen that barely cover an ass that will live in my dreams for years to―”

Lexie dropped. Before she could get out the ear-piercing, girly scream that roared in her head, she landed in Mac’s arms. The impact crushed the air from her lungs.

Wrapping her arms around his neck, she allowed his strength and his herbal all-male scent to soothe her. He eased her legs back on solid ground, but she didn’t let go. She couldn’t remember a time in her life when she felt so safe, protected.

She raised her chin and met his amused stare. Of all stupid days to wear a skirt to work. As soon as she got out of this mess, it was going to Goodwill. Heat spread up her neck and her chest tightened. “This one time, I’m going to let that go.”

“Let what go, Lexie?” Mac’s hand moved slowly down her back to her waist and pressed her tightly against him.

His touch sent a flash of need that had been dormant for too long into her gut. Lexie swallowed but couldn’t look him in the face. “That wasn’t my best moment on that ledge. You shouldn’t have looked.”