Congratulations to "Bn100" and "Kai", the winners in C.A.'s giveaway. Thank you to all who participate.

I’m addicted to writing series. I can’t help myself; I am currently writing three separate ones that are vastly different from each other.

When characters introduce themselves to me (they don’t like when I say I made them up) they usually bring a friend or two. These secondary characters are usually made of awesome in one way or another, and demand a story of their own (some are more patient than others). 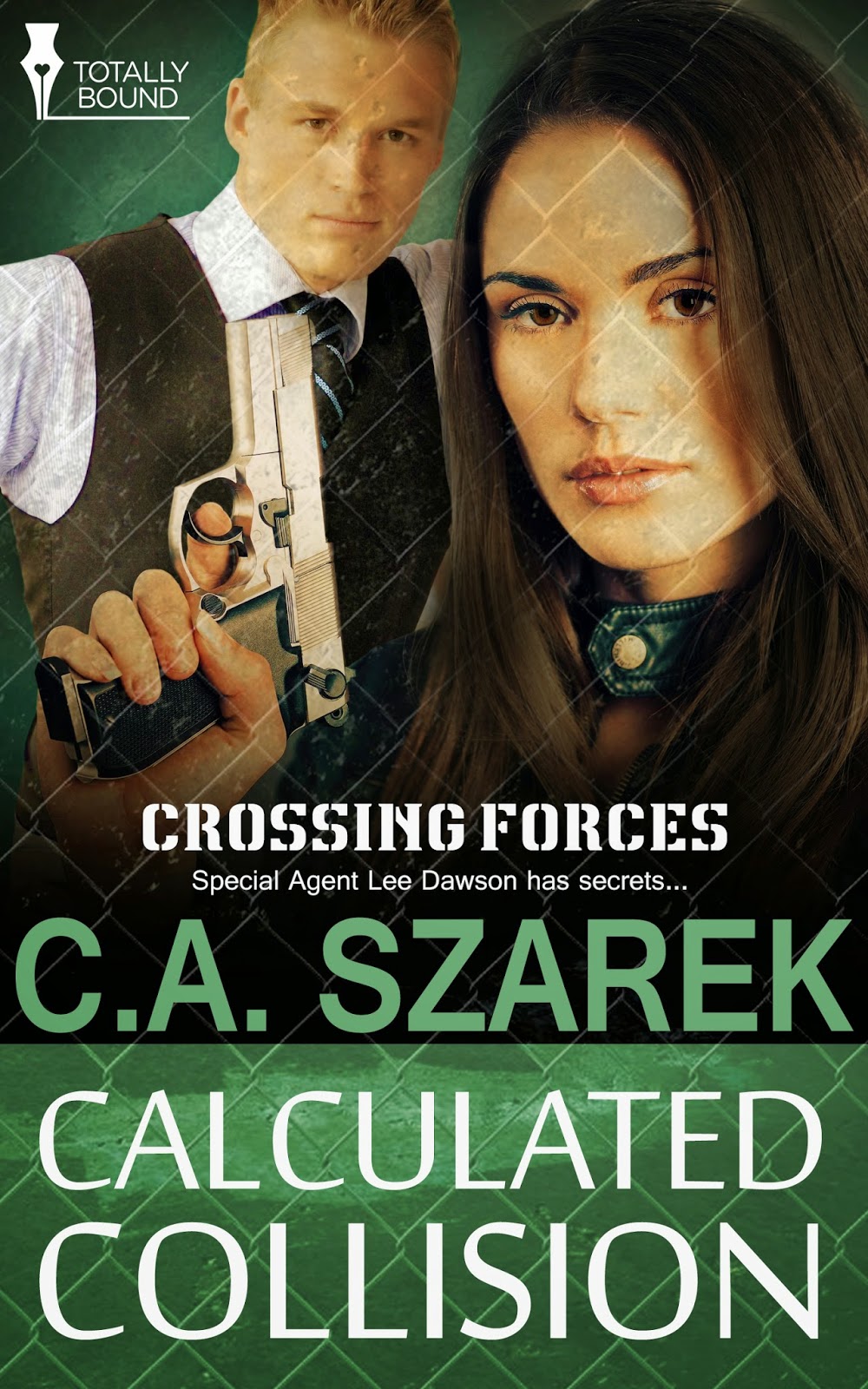 That right there is why I get sucked into series—writing and reading them, actually.

Whether it’s a made up fantasy world or a contemporary setting, interesting characters draw you in—if I did my job right as an author. So the secondary characters leave you wanting more. Onto the next book, I say.

Lee, the heroine of CalculatedCollision (Crossing Forces Book Three) that just released June 6, 2014 from Totally Bound Publishing, is one of those eye-catching characters that demanded her own story from the start.

We met her in book one, Collision Force, as a helpful FBI agent toward the end of the book. Then, in book two, Chance Collision, she demanded more of my attention when she was paired with the hero, Pete. 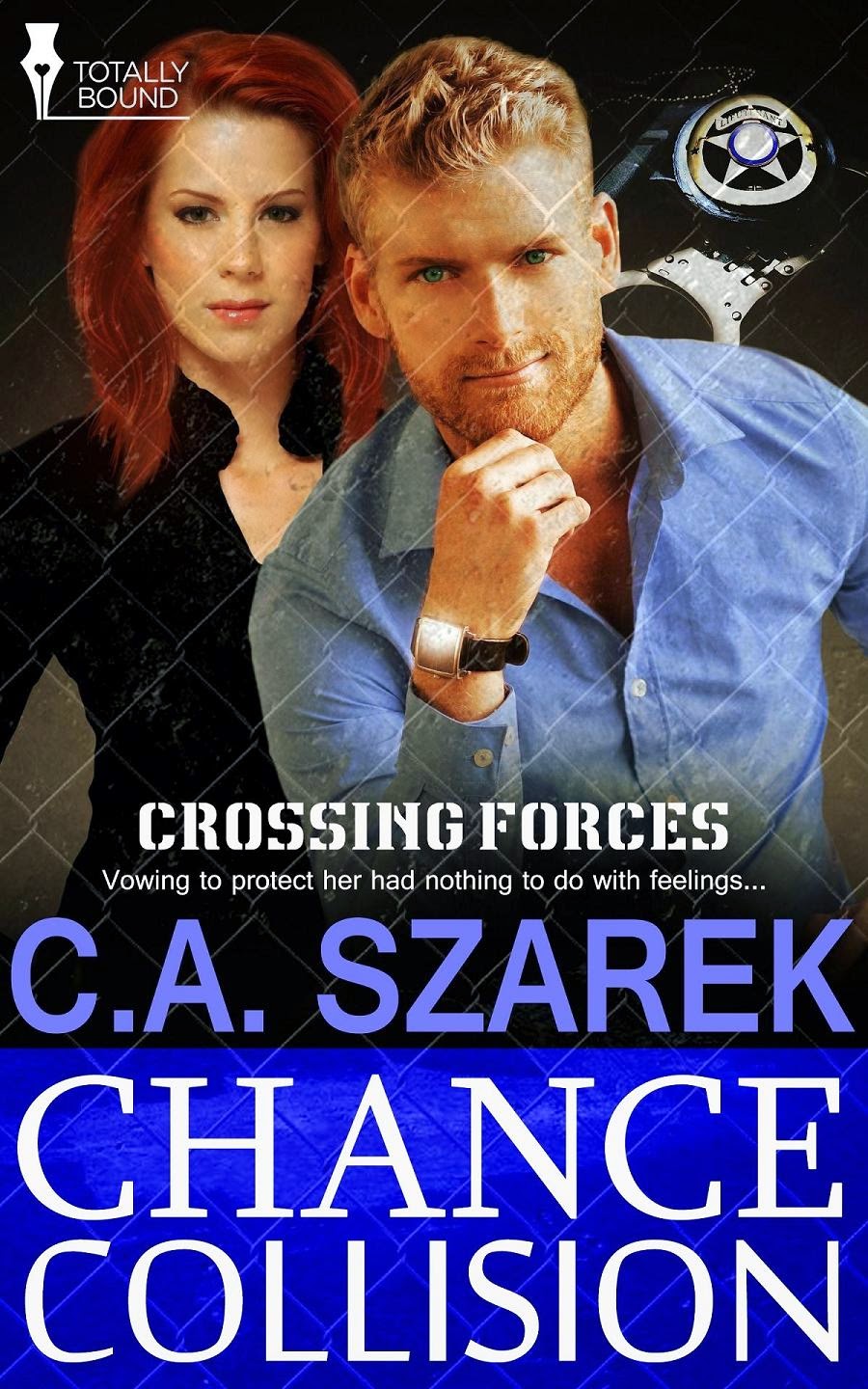 No, she wasn’t his heroine, but she definitely reminded me she needed her own story.

I complied, because they rarely give me peace if I don’t.

I adore Lee, and her man, Nate. It was a tough story because of her past, and the baggage she’s carried around for a few years. I cried when I was writing a few scenes, so I hope the reader feels that emotion when it’s read.

A few more lovely characters popped up in Calculated Collision, as well, so I guess as I continue on, I’ll see who else might want to be heard.

Book Four, Collision Control comes out October 3, 2014 and I met a few interesting characters along the way with it as well. I’m sure in book five, which I am about to start writing, even more will say hello!

I’m not worried about them letting me know, they always do!

MY GIVEAWAY!
Do you like to read series? Why? What’s your favorite part of connected stories? What don’t you like about them? 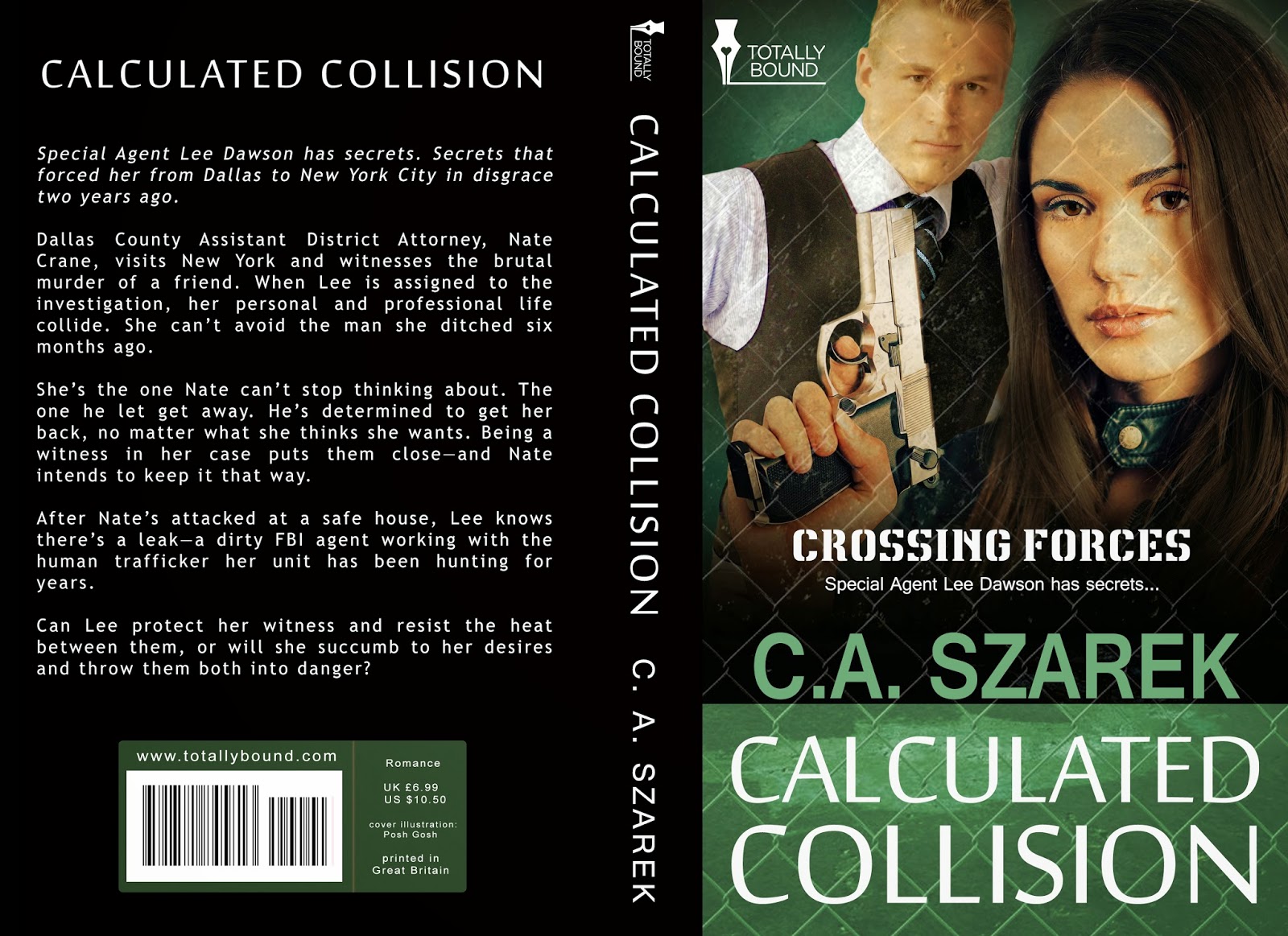 Hard-as nails-FBI agent collides with an attorney and former lover when she has to take him into protective custody after witnessing a murder at the hands of a human trafficker.

FULL BLURB:
Special Agent Lee Dawson has secrets. Secrets that forced her from Dallas to New York City in disgrace two years ago.

Dallas County Assistant District Attorney, Nate Crane, visits New York and witnesses the brutal murder of a friend. When Lee is assigned to the investigation, her personal and professional life collides. She can’t avoid the man she ditched six months ago.

She’s the one Nate can’t stop thinking about. The one he let get away. He’s determined to get her back, no matter what she thinks she wants. Being a witness in her case puts them close—and Nate intends to keep it that way.

After Nate’s attacked at a safe house, Lee knows there’s a leak – a dirty FBI agent working with the human trafficker her unit has been hunting for years.

Can Lee protect her witness and resist the heat between them or will she succumb to her desires and throw them both into danger?

Sweat broke out on her brow and Lee gripped her Glock tighter instead of wiping the moisture away. She bit back a curse.

She hated being in the back. Being back-up.

Lee and her partner, Clint Downs, were the lead agents of their unit, and usually headed raids.

Nothing wrong with the passenger seat, right?

Maybe if she kept telling herself that, it’d sink in.

Hard and fast was all Lee knew. How she got the job done. But even her partner had reminded her there were twelve members of their human trafficking unit. They were all partners.

Ugh. She’d rather hang a ‘Doesn’t play well with others’ sign around her neck.

Her partner’s gravelly voice made Lee tense. “Yup.” She didn’t look his way.

“I’m good.” Flexing her fingers on her gun’s grip, she inched forward. “Wanna get this done.”

Downs didn’t have a chance to answer. The battering ram exploded the door in front of them and wood splinters went flying.

Collective shouts of “Federal agents!” coupled with “FBI!” surrounded her and she rushed forward behind her teammates. In correct formation, head in the game.

Buylinks for the Calculated Collision:

Giveaway ends 11:59pm EST July 6th. Please supply your email in the post. You may use spaces or full text for security. (ex. jsmith at gmail dot com) If you do not wish to supply your email, or have trouble posting, please email maureen@justromanticsuspense.com with a subject title of JRS GIVEAWAY to be entered in the current giveaway. US postal addresses only.