Echoes of the Past: Pushing Boundaries

Congratulations to "Wendy S." and "Mary P.", the winners in Susanne's giveaway. Thank you to all who participated.

Thanks so much for having me on again. I love sharing my romantic suspense novels with your followers. This month, I have something new and different to share. My latest romantic suspense novel pushes the boundaries a little bit. How? Well, it incorporates a touch of the paranormal—no werewolves or vampires, but my main characters have met before, two hundred years before! 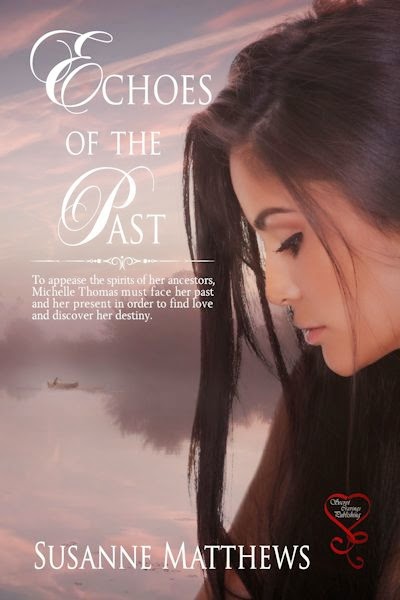 I wrote Echoes of the Past as my NaNo novel in November, 2013. I was driven to write the story. From the minute I got home, I knew I had to use The Lake of the Mountain in a novel—I just didn’t know how. Sound strange? Let me explain. Last September, my husband and I visited Prince Edward County, the only island county in the province of Ontario, for something to do on our 42nd wedding anniversary. We’d spent the previous night in Gananoque, a small town in the Thousand Islands, and we weren’t ready to go back home. Picton, and Prince Edward County are only 3 hours from home, so we could spend the day, and go back later.
The Lake of the Mountain Resort has a beautiful outdoor restaurant, and we stopped for lunch. The resort abuts the Lake of the Mountain Provincial Park. We walked across the road to the lookout and saw the Ontario coastline and Lake Ontario 200 feet below us. We crossed back to the lakeside and walked along the boardwalk. I read the signs explaining about the Lake of the Mountain itself and its geographical oddities and I also scanned the short entry on the sighting of sea monsters and the Mohawk legend which fascinated me. The mystery surrounding the lake itself—specifically, the fact that it’s said to be bottomless at its center—called to me. For a mystery writer, my first thought was what a great place to hide a body!

I’m a pantser. That means, I don’t have a nice neat plot outline to work with when I start a novel. I have an idea, and the story flows from that. Here’s what I worked with:

• Mysterious lake—where does the water come from—I know where it goes
• Indian legends—is the lake haunted? Could it be?
• People die around lakes—drownings, who? why?
• Alexis, in Fire Angel, could understand how fire works and sense the person who set the fire—can this heroine understand drowning victims?
• Illegal drugs are a big problem all over—could we have drugs involved?
• Bottomless lake—what could be hidden there?

So, with those points in mind, I created Echoes of the Past. Essentially, Echoes is a romance of lost souls reunited in the here and now. Michelle and Tony are drawn to the lake for different reasons, but will they find one another in time to save themselves and the lake?

It’s also a suspense novel because we have two dead bodies found along the beach, and no one knows how they got there or why they drowned—if they did. Michelle must find out who’d want them dead and why. People seem to be in a hurry to sweep the drownings under the rug, and that’s suspicious.  Michelle is attracted to not one but two men, and she needs to figure out which one will help her solve the mystery, and which one would like to see her dead.

Finally, it has paranormal elements in that the heroine can talk to the ghosts of drowning victims. She visits a witch/seer who helps her on her quest to understand herself and the strange dreams that have plagued her all her life. Can she appease the spirits of her ancestors, stop the killers, and find love and happiness? You'll have ’o read the story to find out.

Giveaway:
Susanne will be giving away 2 digital copies of ECHOES OF THE PAST

Echoes of the Past

Born Mohawk, raised white, forensic pathologist, Michelle Thomas is trapped between two worlds—this one and the spirit world where the ghosts of those who’ve drowned speak to her. Haunted by crippling nightmares of her own drowning death and erotic dreams of a phantom lover, she strives to make sense of her life. When two suspicious deaths occur at the Lake of the Mountain Resort, she’s sent to investigate. She’ll face the greatest challenge of her career when her past and her present collide. One of these men is her future, but which one—the rich and powerful Mayor Ron Davies, or Tony Steele, the hydrology professor who may be responsible for his students’ deaths? Charged by the spirits of her Mohawk ancestors to atone for her previous sins by protecting Lake of the Gods, can Michelle solve the murders, save the sacred waters, and fulfil her destiny?

Purchase Echoes of the Past from SCP.
Check my Website for other purchase options.

Excerpt:
“Colin wants me to come in today. It would be nice to have some idea what he’s got on his mind. I’ll just take a quick peek. You know how I hate surprises. It’ll only take a sec. Maybe it isn’t an assignment. Maybe he just wants a second opinion on something. Go ahead and eat. I’m not going to rush away on you, I promise.”

“I’ll cross my fingers. Your last case took a lot out of you. You look like crap, by the way. You’re having those nightmares again aren’t you—the ones where you fall into the water and drown or something? Don’t say you aren’t, I can tell. You need a break, and I want you to meet Simon. You’ll love him. He’s cute and…” Tasha laughed. “I like him, what can I say? I think he’s the one, Mitch, I really do.”

She took another bite of her sandwich, and then motioned toward Michelle with it. “Go ahead. If there’s anything interesting, can you share?”

She opened the first attachment and frowned.

“Whoever took this isn’t much of a forensic photographer.”

“You’re such a perfectionist. You can be so picky at times. God, the last thing I’d want to do is have you sit in on a necropsy. You’d be criticizing my every move.”

“Not picky, thorough. There’s a difference. It’s like with my quilting. I like to be precise. Anytime you want my advice, just ask, but unless the pooch has drowned…” She huffed out a breath. “This picture asks more questions than it answers. I hope the others are clearer. Since their heads are in the water, they probably did drown, but why?”

“Why not? You can’t tell who it is.” Michelle held the phone up.


“You know your thoroughness makes you one of the top forensic investigators in the province. If Colin’s giving this to you, it’s because he thinks there’s something to it. If anyone can figure out how those guys got dead, it’s you.”

About the author:
Susanne Matthews was born and raised in Cornwall, Ontario, Canada.  She’s always been an avid reader of all types of books, but always with a penchant for happily ever after romances. In her imagination, she travelled to foreign lands, past and present, and soared into the future. Today, gets to spend her time writing, so she can share her adventures with her readers. She loves the ins and outs of romance, and the complex journey it takes to get from the first word to the last period of a novel. As she writes, her characters take on a life of their own, and she shares their fears and agonies on the road to self-discovery and love.

Giveaway ends 11:59pm EST July 31st. Please supply your email in the post. You may use spaces or full text for security. (ex. jsmith at gmail dot com) If you do not wish to supply your email, or have trouble posting, please email maureen@justromanticsuspense.com with a subject title of JRS GIVEAWAY to be entered in the current giveaway.
Posted by Maureen A. Miller at 12:30:00 AM