Congratulations to "Janet K", the winner in Marsha's giveaway. Thank you to all who participated!

When I began this writing journey almost 7 years ago now, sometimes I’d have contest judges say, “Your book’s in the wrong category. Why don’t you try mainstream, or women’s fiction?” Well, I took their advice, rotating between those and romantic suspense, sometimes finalling, sometimes not. One time, the same entry finalled and bombed in two different contests! Loved that one because it illustrates how subjective is the business of reading and writing. What follows is strictly “IMHO!” So take it with a shake of salt and pepper. :)

There’s no one answer to explain romantic suspense. It’s more of a continuum along which various writers and readers find themselves. On the far end of the line, you’ll probably find less violence, sweeter romance, less complex plots. On the opposite end of the line, you might find more blood, gore, murders, gruesome serial killers, psychological terror, graphic sex, maybe more complex plots.

Obviously in between those extremes, you’ll find all variations of romantic suspense novels. There is no right or wrong here, folks. Just differences along the continuum. One of the things I love about writing and reading is the variety that means whatever our preferences are for reading or writing, we can find it. As a reader, I need to have both the romance and the suspense. I don’t want either without the other. Again, that’s my preference. Some folks don’t want those two combined. 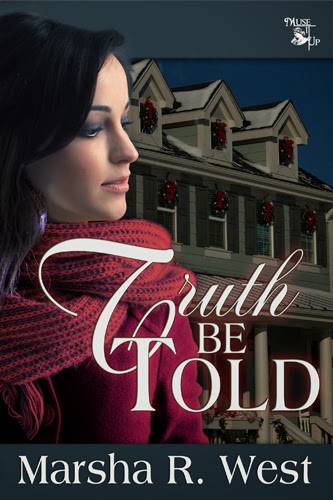 In my own books, you’ll find stories involving characters in their 40’s and 50’s, violence and murders (but not grossly bloody), you’ll find good sex scenes according to one fan, but not enough for her taste. :) (Remember it’s all subjective.) Parts are scary and gave bad dreams to one reader. (She admitted to not being regular reader of romantic suspense.) I hope you’ll find a good emotional ride that will bring you a happily ever after, but along the way, you’re not sure how I’ll pull that off. :)

Below are the blurb and an excerpt for my second book and most recent release TRUTH BE TOLD from MuseItUp Publishing. I hope you enjoy, and I hope you’ll stop by my blog on Thursday. I’ll be sharing my recent experience at RomCon 2014 in Denver. Come find me on Facebook, personal and Author page and Twitter.

Giveaway:
Comment here for a chance to win an e-copy in format of your choice of TRUTH BE TOLD.

BLURB
An Atlanta SWAT member visiting her family in Fort Worth at Christmas wants to stop the person blackmailing her father. Teaming with her brother and his former homicide detective partner to discover the truth, she hadn’t expected to fall in love.

EXCERPT
“Dad, glad it’s just you.” Meg’s voice wasn’t as strong as she intended. Her father didn’t respond. Didn’t he hear her? He threw a crumpled paper across the room, and then he sank into the chair behind his desk. His head cradled between his hands.

Adrenalin kicked through her system shooting lightning spikes down her arms. “Dad, is something wrong?” Again, no response. Meg moved further into the study. The pipe smoke smell dimly registered. Was he having a heart attack? She stopped in front of his desk. “Dad?” Almost shouted the word.

“What?” He raised his head, but his gaze darted around the room.

Didn’t he recognize her?

“Meg?” He shoved his hair off his forehead and dragged in a breath. “When did you arrive?” He asked in a voice tight with strain. His gaze never connected with hers.

Not a heart attack. Thank God. She let out a huff of air. “A while ago. Are you all right?”

Her father placed his hands on the desk and straightened into the ramrod posture she’d seen all her life.

BIO
Marsha R. West, a retired elementary school principal, is also a former school board member and theatre arts teacher. She writes “Romance, Suspense, and Second Chances. Experience Required.” Her heroes and heroines, struggling with life and loss, are surprised when they discover second chances at love.
Marsha lives in Texas with her supportive lawyer husband. They’ve raised two daughters who’ve presented them with three delightful grandchildren.
Her first published book, VERMONT ESCAPE, was e-released by MuseItUp Publishing in the summer of 2013. She’s sold a third book to MIU. In SECOND CHANCES, the hero, Mike Riley, played a supporting role in VERMONT ESCAPE. SECOND CHANCES is the first of a planned series about four women who met when they were kids at summer camp. It’s scheduled for e-release in winter 2014/2015.

Giveaway ends 11:59pm EST June 29th. Please supply your email in the post. You may use spaces or full text for security. (ex. jsmith at gmail dot com) If you do not wish to supply your email, or have trouble posting, please email maureen@justromanticsuspense.com with a subject title of JRS GIVEAWAY to be entered in the current giveaway. US postal addresses only.