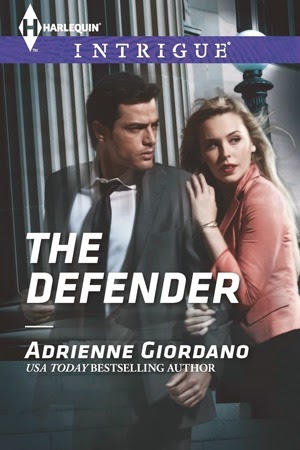 A TOUGH-AS-NAILS FBI SPECIAL AGENT AND A STUNNING BLONDE ATTORNEY WITH SOMETHING TO PROVE JOIN FORCES IN THE DEFENDER.

By all accounts Penny Hennings was the sort of woman FBI special agent Russell Voight went for. Smart, sexy and with just enough sass to keep him honest. Then she went sticking her nose in undercover FBI business. He knew her legal reputation would skyrocket if she won this case. But every move she makes undoes all the work Russell's put into taking down the city's biggest crooks. And the criminals they're after will do anything to avoid the witness stand—including kill. So it's time to pool their resources and collaborate. Even if working together every day takes them late into the night…and into the line of fire.

USA Today bestselling author Adrienne Giordano writes romantic suspense and mystery.  She is a Jersey girl at heart, but now lives in the Midwest with her workaholic husband, sports obsessed son and Buddy the Wheaten Terrorist (Terrier). She is a co-founder of Romance University blog and Lady Jane's Salon-Naperville, a reading series dedicated to romantic fiction.

Giveaway
As part of the tour-wide giveaway, one lucky person will win a signed print copy of The Prosecutor, a $25.00 Amazon gift card, a bullet charm bracelet and set of bullet earrings.  The giveaway will run from May 30, 2014 – June 11, 2014.
Excerpt from THE DEFENDER

“You don’t have to walk me in,” Penny said to Russ while they waited for the elevator to scoop them up at the garage level of her condo building.

For the nine months Penny had lived in this building, she’d been a believer that the extra monthly fee—convenience tax, as she called it—for a building with a gated garage was worth it. Now, with Colin Heath threatening her, she was sure of it and would never again complain about shoes she could have bought with the convenience tax money. Even if the slow gate drove her mad, she remained thankful for its presence.

Casual conversation. That’s what this was because she knew that he knew that she knew they were both thinking the universe had royally flipped them off. After the crazy emotional day, one that included the two of them admitting their mutual attraction, the god of love decided this would be the night a judge received a death threat and the extra marshal assigned to Elizabeth Brooks would go to the judge.

Not wanting to leave Elizabeth with only one marshal, Russ and Brent decided Brent would stay behind while Russ drove Penny home. In the morning, Russ would return with Brent’s car.

All around a good plan because Elizabeth would be safe. However, Penny was about to step into the elevator leading to her condo—her very empty condo—with the FBI agent her girly parts wanted a piece of. Elizabeth was safe. Penny was not.

She rocked back and forth while the floors blinked off. The doors finally slid open and Russ held them so she could step on. A gentleman to boot. Could this get any worse?

“Hey,” she said. “We’re professionals. We can handle this. What’s a little lust?” She nodded toward the elevator buttons. “Eighth floor, big guy.”

Russ laughed. “You really are insane.”

That would be one way to put it. “It’s true. Ask anyone.”

When the doors slid open again, Russ stuck his arm out to block Penny’s path, then checked the hallway. “All clear. Got your keys?”

She stopped in the hallway outside the elevator and watched the doors close. He needed to be on that elevator. Away from her very empty apartment. Where she wanted to introduce him to an extremely inviting bed.

That throbbing mass in her stomach exploded. Big trouble. “You can go now.”

“Sorry, babe. Have to check the apartment.”

“You’re the one who said we’re professionals. Standard procedure. If Brent were here he’d do it. Last thing I need is not to do it and have you kidnapped. Although, you’re such a pain, they’d probably throw you back.”

He laughed at his own joke and Penny gasped, but really, there was a certain amount of pride she could take in scaring off would-be kidnappers. “Russell, I’ve said it before, flattery will get you everywhere.”

Particularly when it comes to my bed.

She spun, marched down the curving corridor and lamented the fact that the plush carpeting absorbed her footsteps. Sometimes a girl wanted to hear her own stomping and this carpet was stealing her fun.

What am I doing? Making herself crazy. That’s what. She shook her head to clear the madness, lightened her footsteps and breathed in. Professionals. They could handle it. She’d just let him do his little search while she locked herself in the closet where she couldn’t watch him entering her bedroom. Simple plan.

She focused on her apartment door just ahead. At this hour, most of her neighbors had gone quiet. Mr. Hanley’s television was still on, but that was normal since he was an insomniac. She unlocked the door, pushed it open and waved Russ in. Thank goodness she’d left the place neat.

He glanced around the living room. “You always leave the lights on?”

He nodded in that way that said he really didn’t have an opinion on that fact, but didn’t necessarily think it odd.

“You mind if I check the rooms?”

“Have at it. I’ll know if you go through my underwear drawer.”

His only answer was a grunt.

“I guess you could save that for next time, though.”

“I’m ignoring you,” he yelled from the bathroom.

Penny laughed and after the long day, laughing felt like that barrel of gummy bears she needed. She stood in the middle of her living room, pondered the closet door while he checked the two bedrooms. Maybe she wouldn’t actually get in the closet. If she just stared at it, it might be enough to keep her from seeing Russ in her bedroom.

“See anything of interest?” she called.

“Other than the bra you left on your bed?”

Oh, just hell. In a rush that morning, she’d taken the lacey bright pink bra off because—well—she didn’t know why. It just hadn’t felt right so she swapped it out for a plain beige one and obviously had forgotten to put the sex kitten one back in the drawer. Once again, the god of love had flipped her off. How could Penny have known Russell Voight would be escorting her home?

“I didn’t think I’d have company. In my bedroom.”

He stepped into the hallway. “Yeah, well, what’s another round of torture?”

Walking toward her, he stopped at the kitchen, smacked on the light, checked the miniscule pantry that a four-year-old wouldn’t fit in and turned the light off again.
Then he was in front of her, his tie loose and the button on his collar undone and if he looked tired, she couldn’t blame him. Even she, who functioned on very little sleep, needed her bed.

“I’ve got a marshal on his way here. He’ll stay outside your door tonight.”

For a second, she’d thought about arguing. Pretending to argue really because as much as she hated to give in to the fear and weakness of being Heath’s prey, the only way she’d sleep was if she knew someone would be there.

“Russell, how well do you know these marshals?”

“Heath is insane, but he’s also brilliant. He seems to know my every move.”

“You think there’s a leak somewhere?”

“Look, it’s a valid question. One I’ve thought of myself. I’m on it. Anyone involved in this case, we’re checking their financial records. If Heath has someone on his payroll, we’ll find them.”

She nodded. “It’s probably nothing.”

“Doesn’t hurt to look. I’m heading to the safe house in the morning. Assuming you want to be there?”

“Yes. I need to go to the office first.”

Russ scratched his stubbled chin. “That works. We want everything to look business-as-usual. I’ll pick you up at your office and then we’ll do some creative driving in case Heath is watching. That work?”

She rocked on her toes again. Here they were, two professionals, having a chat. No problem. Except the snapping energy in the silent apartment made heat fly off Russ in a constant and brutal wave. That wave would suck her under if she wasn’t careful.

She pointed to the door. “You should go.”

“Yet, he stands here. Unmoving.”

And still he didn’t budge. The only sound was the distant hum from the refrigerator and Penny concentrated on it rather than that damned loosened tie just begging to be stripped off. And then, the wave swooped in and, as if timed, they both stepped forward and Penny reached for his tie and tugged him to her. His hand slid around the back of her head and she went up on tiptoes, anticipating that first press of his lips. That first moment of their first kiss.

June 4, 2014
Reading in Pajamas
Cocktails and Books
The Book Binge


Reviews by Molly
a Rafflecopter giveaway
Posted by Maureen A. Miller at 12:30:00 AM