Is it the romance, or is it the suspense?

I read all types of romances, from historicals, to vampire novels, to contemporary romances, to humorous, to heart wrenching, twenty hanky reads (which I’d rather avoid!), whether category or single title. What can I say, I’m a “happily ever after” junkie. :-)

But I want more. That zing, if you will, of danger. Maybe it’s a mystery to be solved, perhaps the characters embark on an adventure, or, there’s a real physical threat. I want that something that makes the romance even more high stakes than it would be without it. With a suspense/adventure/mystery plot, the romantic relationship is threatened by dangerous outside forces that add complications to what could have been a simple “boy meets girl” story line. This more is what gives me that satisfying ending. I can sigh with relief when both the romance and the suspense are tied in the perfect bow called The End. 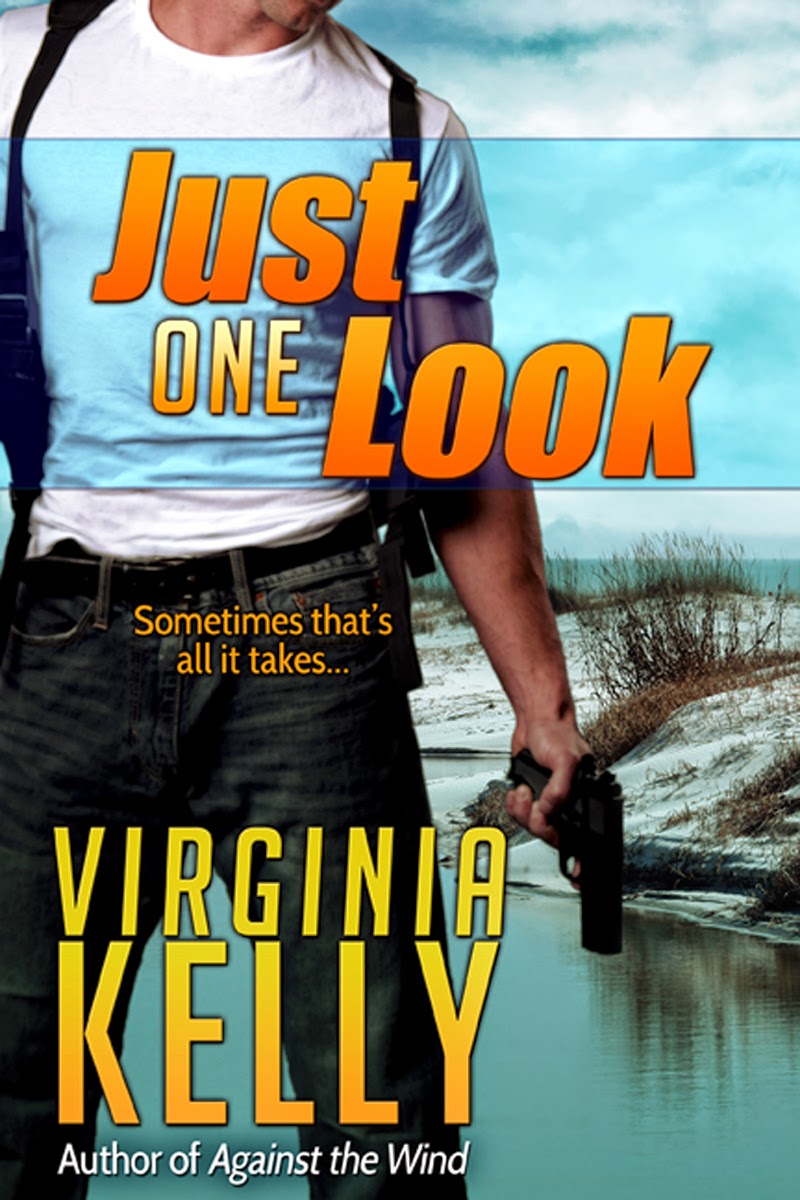 Back to the emphasis of the story: the romance, or the suspense/adventure/mystery. My books tend to be 60% romance, 40% suspense. My latest, Just One Look, is closer to 70% romance, 30% suspense.

Where do you prefer the emphasis in your perfect romantic suspense novel? On the romance or on the suspense? Both equally? Can you break it down into percentages?

Giveaway:
Comment and enter the Rafflectopter below for a chance to win. Winners will be notified by May 10, 2014.
1st place: $5.00 gift card (Amazon OR Barnes and Noble)
2nd place: Against the Wind (ebook by Virginia Kelly) (Kindle only)
3rd place: Dancing the Dark (e-novella by Virginia Kelly) (Any format)

Sometimes that's all it takes…

FBI Special Agent Drew Davenport, still recovering from a life-threatening wound after a disastrous shootout, doesn’t have time to be serious about any woman. But Mia Alvarez, with her down-to-earth warmth, leaves him blind-sided.

A painful experience crushed Mia’s belief in love. The last thing she needs is an entanglement with Drew, whose sister is marrying her brother. And certainly not when she’s keeping a major secret. Despite her misgivings, forced proximity and overwhelming attraction lead to passion.

When Mia's secret shows up in the form of a stalker, Drew’s determined to protect her. Can he overcome his fear of failing again when emotions get in the way? And while Mia trusts Drew with her safety, can she trust in love when it happens with just one look?

Excerpt:
That’s when Drew saw her.
The knock-out, fiddling with the younger sister’s hair. Who could that be? He’d met everyone, hadn’t he? Both sisters, the endless cousins and assorted relatives. Who the hell was she?
She turned, and he knew instantly who she was.
The older sister. The prickly one with thick glasses. Mia, she’d said as she’d shaken his hand with ice-cold fingers and a businessman’s grip. Only she wasn’t wearing the thick glasses she’d worn at the rehearsal dinner, nor the prim business suit. She stood next to the younger sister... Izzy, that was it. Dizzy Izzy, he’d thought last night. She stood next to Izzy as calm and serene as a queen in a knee-length cream-colored dress that enhanced everything the business suit had hidden.
She wasn’t tall or blond, what he’d always considered his type. Prepared to dismiss her since he’d been fooled too many times by good looks, he nearly turned away. Then she smiled at something the flower girl, daughter of one of the cousins, said, and squatted to be eye level with the little girl.
And all the prim, all the regal, disappeared.
She was simply breathtaking.
He remembered watching one of the old Godfather movies and ridiculing how, based on a single look, the youngest Corleone son had gone bat-shit crazy over a girl.
His rational self argued that this sort of thing didn’t happen.
Still, he watched as she totally disregarded formality, hair, clothes, and hugged the flower girl. No cold fingers or businessman’s grip about her.
Warm and vital and gorgeous and classy…and so damn sexy.
Jesus. He’d counted on a few days of sun, sand and water. He hadn’t counted on her.
It felt like getting shot in the gut again.

About the Author:
Virginia's first story involved a mouse that hitched a ride with Paul Revere. She was eleven. A bit later and bit more organized, dreams of romance (with a happily ever after), adventure, and danger came together to produce To the Limit, her RWA Golden Heart nominated novel. In the Arms of a Stranger is a finalist in the National Readers Choice Awards. She writes about dangerous heroes (sexy, gorgeous ones, of course!) and the adventurous women willing to take a chance on them. An academic librarian, Virginia is a native of Peru and lives in Florida with her family.