HOW THE BRODIE BROTHERS WERE BORN

With ten or more reality shows about Alaska, it's becoming clear that word is out on this magnificent jewel of a state.

A lifelong dream of mine was to drive there--a more than five-thousand mile journey from my home in Montana.  In the end, Alaska was so wonderful my husband and I made the month-long trip in the back of a tiny pickup camper--two times! 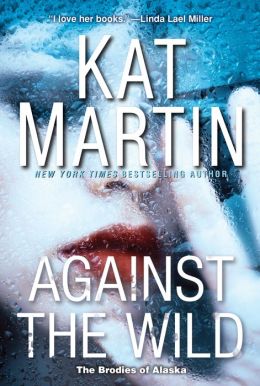 It was the time I spent in Alaska that sparked the idea for AGAINST THE WILD, which is Dylan Brodie's story.  (Dylan first appears in AGAINST THE MARK.   He's Ty Brodie's cousin, so sexy he just had to have a story of his own!)

In AGAINST THE WILD, Dylan's the new owner of an old fishing lodge in remote Eagle Bay, Alaska, a place he intends to rebuild as a home for himself and his eight-year-old daughter.

Unfortunately, the crew working on the lodge are beginning to believe the old place is haunted.  So does sexy, red-haired interior designer, Lane Bishop, the woman Dylan has hired to help him with the extensive remodel.

But is the haunting real?  Or is it something even more sinister?

There was so much about Alaska I wanted to explore in my writing that the project expanded to include novels for Dylan's two brothers, Nick and Rafe.  AGAINST THE SKY and AGAINST THE TIDE are scheduled for release next year.

I hope you enjoy AGAINST THE WILD and that you’ll look for the next Brodie brothers' adventure.  Till then, all best and happy reading, Kat

Where the men are as bold and untamed as America’s last wilderness
It’s been three years since Lane Bishop tragically lost her fiancé, and she’s finally ready to risk her heart on someone else. The hot look in Dylan Brodie’s eyes says he’s going to be that man.

But when Lane flies to the remote 1930’s fishing lodge to help him renovate, she discovers a little girl who won’t speak, eerie legends and strange sounds in the night. And when she investigates the history of the lodge, she uncovers a legacy of injustice and murder.

As danger stalks his daughter and the woman he is coming to love, Dylan must risk everything to uncover the shocking truth.


CHAPTER ONE
The low moaning of the wind awakened him.  The old fishing lodge, constructed in the thirties, was built of hand-hewn logs, the chinking between them worn by time and weather, leaving spaces for the air to blow through.  An eerie keening echoed inside the house, a chilling sound that sent shivers down Dylan’s spine.

Just the wind, he reminded himself.  Nothing to do with stories of ghosts and hauntings.  Just an inconvenience, nothing more.

Still, he had Emily to think of.  Dylan Brodie swung his long legs to the side of the bed, shrugged into his heavy flannel robe, and padded barefoot down the hall toward his daughter’s bedroom.

The lodge he’d purchased earlier in the spring was big and sprawling, two stories high, with a separate family wing for the owner, another for the prestigious guests it had once hosted, back in its heyday in the thirties.  The living room was big and open, exposing fourteen-inch logs in the ceiling.  A massive river rock fireplace climbed one wall, a second, smaller version warmed the sitting room in the master suite.

Dylan had fallen in love with the place the moment he had seen it, perched on Eagle Bay like a guardian of the two hundred forested acres around it.

Old legends be damned.  He didn’t believe in ghosts or any of the Indian myths he had heard. He’d waited years to find the perfect spot for his guided fishing and family vacation business, and this was the place.

The wind picked up as he moved down the hall, the air sliding over rough wood, whistling through the eves, the branches on the trees shifting eerily against the window panes.  Dylan picked up his pace, worried the noise would frighten Emily, though so far his eight-year-old daughter seemed more at ease in the lodge than he was.

Frosted glass wall sconces dimly lit the passage as he walked along, original, not part of a remodel of the residential wing done a few years back, before the last owner moved out and left the area.

The four bedrooms and bathrooms upstairs on this side of the building weren’t fancy but they were livable while he worked on the rest of the lodge.  The master suite had been updated, but it wasn’t the way he wanted it yet.  Eventually, he would rebuild this section, as well, bring it all up to the four-star standard he’d had in mind when he had purchased the property.

Dylan paused at the door to Emily’s room, quietly turned the knob and eased it open.  His daughter lay beneath the quilt that his housekeeper, Winifred Henry, had made for her as a Christmas gift, princesses and unicorns embroidered in puffy little pink and white squares, all hand-stitched to fit her youth-size four-poster bed.


His gaze went to the child.  Emily had the same dark hair and blue eyes that marked her a Brodie, but her complexion was as pale as her mother’s.  Unlike Mariah’s perfect patrician features, Emily’s mouth was a little too wide, her small nose freckled across the bridge.

Author Bio:
For New York Times bestselling author Kat Martin, a career in real estate led her down the road to romance.

A short time after the two became acquainted, Larry asked her to read an unpublished manuscript of an historical western he'd written. Kat fell in love with both the book and the author!

"It was quite a romantic story," she admits. "I'd still like to see it get published." Then, after doing some editing for her future husband, she thought she'd try her own hand at writing.

When she's not writing, Kat also enjoys skiing and traveling, particularly to Europe. Currently, she's busy writing her next book.