Congratulations to "Colleen", the winner in Paige's giveaway. Thank you to all who participated! 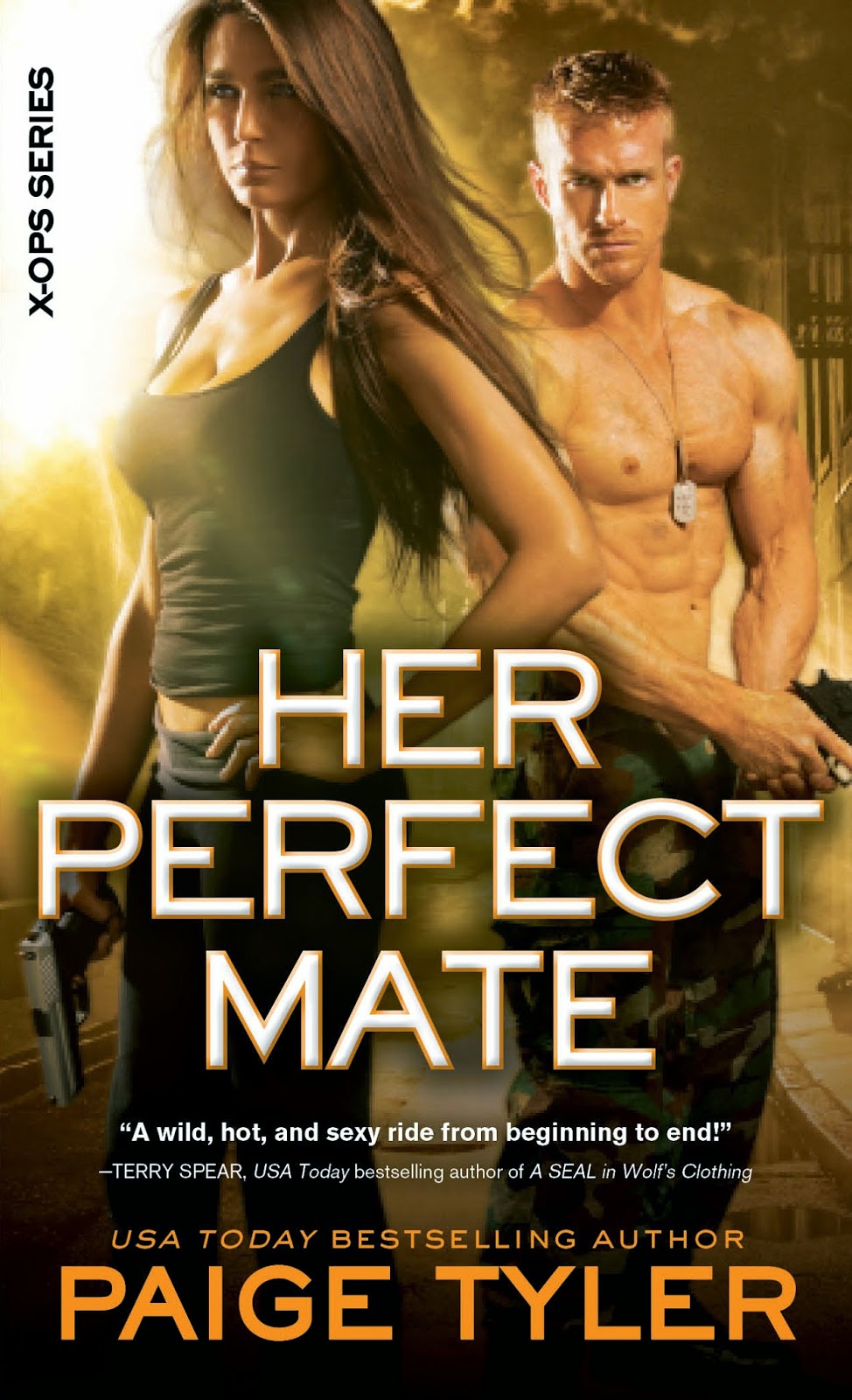 As I started writing HER PERFECT MATE, the first book in the X-OPS Series. I stumbled across an interesting article on the internet about genes and DNA, and how much common building block material humans share with animals. And the article wasn’t just talking about the whole primate thing. It pointed out how many common genes we share with completely different animals—like chickens.

Much of the article was over my head, but one particular part really stuck with me. It pointed out that humans can have a particular gene that in another animal would result in a tail growing, except in humans, that tail gene never “turns on.” And aren’t we fortunate for that? I mean, can you imagine what clothes would look like?

But that little comment about shared genes/DNA and genes “turning on” became the foundation for the shifters in my series.

In X-OPS, shifters aren’t monsters, cursed to live in the darkness, or possessed by a demon (which are all very cool ideas by the way). They simply possess shared animal DNA that has turned on.

In HER PERFECT MATE, the heroine Ivy Halliwell is a cat shifter. In her case, her feline DNA shows up in the form of claws and fangs that slide out when needed (and sometimes when they’re not), drastically improved senses (like great night vision—oh, and she can smell a tempting man a quarter mile away), enhanced muscular strength and endurance, and of course catlike reflexes.

But there is bad with the good. Ivy (and all the other shifters) has hidden her abilities from most of the world, knowing she’d be labeled as a freak if people knew. Even her previous partners in the covert organization she works in treated her that way. The organization doesn’t really help matters much, considering her and others like her to be nothing more than Extremely Valuable Assets, or EVAs for short. Nothing like being told you’re just another covert asset to make you feel inferior, huh?

The lack of trust and respect makes shifters hide a lot of things from their employer. Some hide certain abilities, while others hide weaknesses. One of the things Ivy tries to hide is how much closer to an animal she can be in certain situations.

But as much as Ivy tries to hide it, all her secrets will come out with her new partner, Army Special Forces Captain Landon Donovan. Will he think she’s a freak, too? Or will Ivy’s inability to trust anyone destroy their partnership? Or maybe they’ll just get each other killed first.

When Special Forces Captain Landon Donovan is chosen for an assignment with the Department of Covert Operations, he's stunned to find his new partner is a beautiful woman who looks like she couldn't hurt a fly, never mind take down a terrorist.

Ivy Halliwell isn't your average covert op. She's a feline shifter, and more dangerous than she looks. Her feline DNA means she can literally bring out the claws when things get dicey. She's worked with a string of hotheaded military guys who've underestimated her special skills in the past. But when she's partnered with special agent Donovan, a man sexy enough to make any girl purr, things begin to heat up. He doesn't think she's a freak-and he's smokin' hot. Soon they're facing a threat even greater than anyone imagines...and an animal magnetism impossible to ignore.

Landon frowned at the next obstacle—a thirty-foot solid wood wall. On a normal military confidence course, the same wall might be ten feet high. Tough to get over by yourself but doable for a two-person team. Nobody could get over this one, even with teamwork. No average human anyway.

Landon glanced at her. “I don’t suppose you can fly, can you?”

“Not quite” She hesitated, then added, “But I can climb it.”

He raised a brow. “Climb it? You’ve gotta be kidding me.” When she didn’t answer, he folded his arms across his chest. “This I’ve gotta see.”

Ivy’s pulse quickened. Part of the reason the DCO made them do the confidence course was to expose Landon to her true nature so he could recognize its value. Or cringe in revulsion. Time to see if he could handle it or would go running off for a psych evaluation.

Turning to face the wall, she let her fingernails extend until they were as long as those of the great cat with which she shared her DNA. Then she took a deep breath and ran toward the wall. Jumping onto it, she dug her claws into the wood and climbed hand over hand all the way to the top. Heart pounding, she peeked down at Landon, praying she wouldn’t find the disgust she’d seen so many times before.

Reviews:
"An absolutely perfect story-one I honestly couldn't put down. One of the best books I've read in years. I hope this is the beginning of a very long series, because I definitely want more of Paige Tyler's shifters." - Kate Douglas, author of the bestselling Wolf Tales and Spirit Wild series

"A wild, hot, and sexy ride from beginning to end! I loved it!" - Terry Spear, USA Today bestselling author of A SEAL in Wolf's Clothing

"Once I began, the outside world ceased to exist. It's exciting and fast paced." - Paranormal Kiss

"I love a good paranormal romance and this series has started off with a bang!" - Hopeless in Literature Reviews

Available Online and in Bookstores Everywhere

Bio:
Paige Tyler is a USA Today Bestselling Author of sexy, romantic fiction. She and her very own military hero (also known as her husband) live on the beautiful Florida coast with their adorable fur baby (also known as their dog). Paige graduated with a degree in education, but decided to pursue her passion and write books about hunky alpha males and the kickbutt heroines who fall in love with them.
She is represented by Bob Mecoy.


Giveaway ends 11:59pm EST May 7th. Please supply your email in the post. You may use spaces or full text for security. (ex. jsmith at gmail dot com) If you do not wish to supply your email, or have trouble posting, please email maureen@justromanticsuspense.com with a subject title of JRS GIVEAWAY to be entered in the current giveaway.
Posted by Maureen A. Miller at 12:30:00 AM