When it All Ends

Reckoning, the final book in my Degrees of Darkness series released this week. This has been a bittersweet ending for me as I say good-bye to two longtime characters of mine, Detective Remy LeBeau and cowgirl Cody Lewis. These two have walked around in my head for years, pushing me to write their stories. Now their stories are out there for all the world to read and it’s time for me to move on.

When I completed the final draft of Reckoning back in November, I’ll admit, I was sad to see it end. I had invested years—I’m not kidding on the years part—in this series and the characters. New characters popped up along the way as I wrote the books, but the main characters and their friends and family members had always been there. I loved meeting the new people, and delving deeper into Remy’s and Cody’s lives. Pulling out all the stops on how much danger and conflict I could create between the two. Oh, and the cast of antagonists that appeared still linger in my head. I wrote some truly awful bad guys and gals.

During the process of writing all four books in the Degrees of Darkness series I had the privilege of “meeting” some truly awesome professionals in the law enforcement world. Their knowledge helped me get a better understanding of how officers of the law would do their jobs. And how some of them can walk across the line and become crooks themselves. All of this showed me that those are the types of characters I enjoy writing and will continue to do so.

Is this it for some of the Degrees of Darkness secondary characters? I don’t know. One character, Detective Heath Anderson, sort of took over and became an integral part of Remy and Cody’s stories. Heath has proven to be an interesting character in his own right; good ole Texas boy, former Marine Recon sniper with a blank past, a man who Remy trusts, and a loyal friend to both Remy and Cody. In fact, some of my readers have asked to read a book about Heath. I would like to explore him more. He has intrigued me enough that I’d love to see where his story takes me, but right now a new set of characters have taken over in a different book. So, Heath Anderson waits.

For now, it’s time to move on. One day I hope to come back to this cast of characters and see what they’ve been up to since the end of Reckoning. They did worm their way into my heart. And I hope they did the same for you, the reader.

EXCERPT:
Anderson leaned on the front desk, talking with the receptionist. Or was he flirting? Since his brief fling with Cody’s best friend, Kimberly Anne Gregory now Slater, Anderson hadn’t quite bounced back to his old self. Kim called off the relationship because her life had been upended by the truth of her adoption and her parentage. And the suspicion of Anderson’s secret attraction to Cody. Which he never denied or admitted to anyone.

Yet Remy didn’t dare approach the subject. He’d endured the agony of believing Cody had cheated on him after witnessing the two of them dancing and hugging each other in New Orleans. He and Anderson had a good working relationship; no way in hell was Remy going to screw that up by calling out his friend as an attempted woman stealer.

When he joined Anderson at the desk, Remy scrawled his signature on the sign-in sheet. “Is my partner harassing you, Amanda?”

The flamboyant blonde grinned at Remy, revealing her deep dimples. “From the moment he walked in.”

Anderson made a pained noise. “I’m wounded, Amanda. All this time and here I thought you enjoyed my company.”

She rolled her eyes, in her typical sarcastic nature. “Sorry, Detective Anderson, but you don’t have your partner’s charm.”

“You do realize he’s married, right?”

“It’s always the good ones who are taken.” Amanda gave them both a wink. “Doc Warner is waiting on you two down in the morgue.” She punched the lock release and it buzzed.

Together, Remy and Anderson walked through the double doors and strode down the corridor.

“You would throw me under the bus,” Anderson said.

“Admit it, you never stood a chance with her. Not when you’ve got another woman taking residence in your head.”

His partner grumbled and pushed through the next set of doors. Chilled air and the sickly odor of embalming fluids blasted Remy as he entered the room.

“It’s been nine months. I can take a hint. She doesn’t want me.” 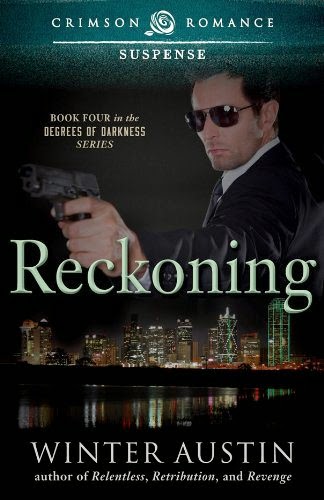 The honeymoon is over for Cody and Remy LeBeau. And Cody’s darkest secret haunts her, threatening to destroy their marriage.

The brutal murder of a former judge sets in motion a domino effect of killings that all point back to Cody and her father. She suspects her father is hiding something sinister from her and Remy. But the closer she tries to get to her husband, the more she feels Remy drifting away from her, taken by his job and his stubborn instance that she’s not trusting him enough. Then her ex-boyfriend sends her a warning note, and with her world spinning out of control, Cody turns to the only man she does trust to help her and protect Remy. Her actions produce a result she’s not prepared to handle.

Remy watches as his once happy marriage is pulled apart brick by brick. With threats closing in all sides, he’s forced to resort to his cold, secretive style that has kept him alive. If he’s to have any chance at succeeding, he must rely on the assistance of the last person on earth he wants to reach out to, even if the result continues to push Cody away.
Death will have a reckoning, and for Cody and Remy it could mean the end of everything they’ve loved.

E-BOOK GIVEAWAY:
For the chance to win a digital copy (mobi or epub format) of Reckoning by Winter Austin, just leave a comment below.  Two winners will be drawn. Good Luck!

ABOUT THE AUTHOR:
Winter Austin was once asked by her husband if he could meet some of the people who took residence in her head. She warned they weren’t all characters he wanted to meet, as killers walked among them. Needless to say, that conversation ended abruptly.

A lifelong Mid-West gal, Winter swears she should have been born in the South, Texas or Louisiana preferably. But then she’d miss the snowy winters.

Dividing her day between her four children and their various activities, a growing pet population, and her Beta-with-Alpha-tendencies Hero, Winter manages to find time to write chilling thrillers between loads of laundry.

Don’t worry. You won’t find any of her mouthwatering culinary dishes poisoned. Unless you’re one of her fictional creations.

Giveaway ends 11:59pm EST April 20th. Please supply your email in the post. You may use spaces or full text for security. (ex. jsmith at gmail dot com) If you do not wish to supply your email, or have trouble posting, please email maureen@JustRomanticSuspense.com with a subject title of JRS GIVEAWAY to be entered in the current giveaway.
Posted by Maureen A. Miller at 12:30:00 AM