Hurricane Sabrina knocked me off my feet, Beth Kennedy whacked me in the head, and Donovan Goldwyn grinned down at me with his violet eyes. Or at least that’s what it felt like when I got the idea for Hurricane Crimes, my romantic-suspense eBook of about 50 pages. I had just read a book set during a blizzard, but being a Floridian I’ve never been in a snow storm. I have, however, witnessed countless hurricanes. Those experiences whirled in my mind and before I knew it, I had a concept for a story.

Beth Kennedy was immediately there—with her arms crossed—waiting for me to begin writing…on Christmas morning no less. I developed her through the music of Adele and Alanis Morissette, and the characters Kate Beckinsale has played in movies, so it’s no wonder that she’s a tough cookie. Donovan, on the other hand, decided to take his sweet time until his first scene came. I had no idea what I wanted him to look like, or what his personality would be, until I met him through writing. No one influenced Donovan, but my creativity, and we both like it better that way.

I used my experiences with hurricanes to write this story with the goal of transporting readers from their cozy homes into the harsh conditions of a category 5 super storm. I also made Hurricane Sabrina a character in her own right, giving her human-like characteristics. 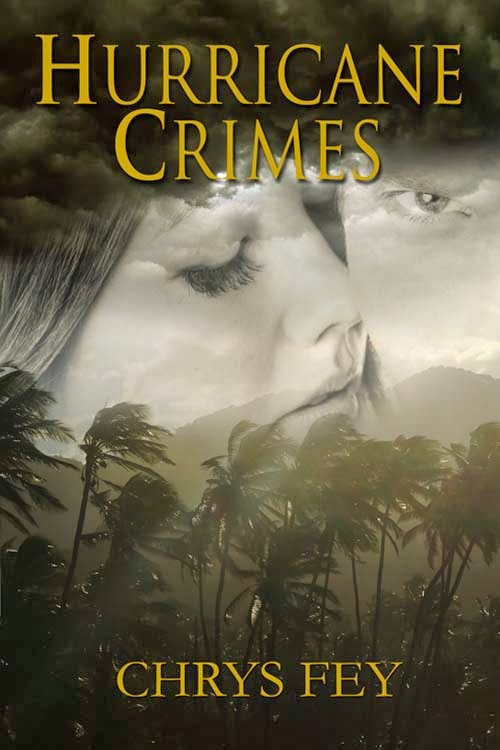 I had a blast writing a story packed with wind, rain, action, and passion.

Blurb:
After her car breaks down, Beth Kennedy is forced to stay in Florida, the target of Hurricane Sabrina. She stocks up supplies, boards up windows, and hunkers down to wait out the storm, but her plan unravels when she witnesses a car accident. Risking her life, she braves the winds to save the driver. Just when she believes they are safe, she finds out the man she saved could possibly be more dangerous than the severe weather.

Donovan Goldwyn only wanted to hide from the police, but the hurricane shoved his car into a tree. Now he's trapped with a beautiful woman while the evidence that can prove his innocence to a brutal crime is out there for anyone to find.

As Hurricane Sabrina wreaks havoc, Beth has no other choice but to trust Donovan to stay alive. But will she survive, or will she become another hurricane crime?

Excerpt:
On the television set, which was fighting to stay alive, was breaking news. She caught bits and pieces of it as she emptied the bowl of blood-tainted water and threw out the cloth. It was about a high-speed chase that had occurred about a half-hour ago. Beth shook her head. Apparently, Donovan wasn’t the only idiot driving around during a hurricane.

She went back into the living room and began replacing all the medical supplies into the first-aid kit. Behind her, a reporter was explaining that the driver of the car was believed to be a murder suspect.

The lights flashed, prompting Beth to snatch up her flashlight.

Her fingers went cold around the plastic tube as ice frosted her veins. She straightened her spine and turned stiffly to the television, her heart wasn’t beating in her chest. On the screen was the picture of the man who was right now changing in her bedroom. Above it was a caption in bold letters that read—SUSPECT.

She gripped the flashlight in her frozen fingers. Her heart thudded fearfully. She stared into the immobilized violet eyes through the glass.
“Oh my god,” she gasped.

She had brought a murderer into her home!

About the Author:
Chrys Fey’s debut, Hurricane Crimes, was published by The Wild Rose Press. Mid 2014, she will be coming out with her second romantic-suspense eBook, 30 Seconds. She created the blog Write with Fey to offer aspiring writers advice and inspiration. She lives in Florida where she is ready to battle the next hurricane that comes her way.