Congratulations to "Erin F.", the winner in Rebecca's Giveaway. Thank you to all who participated!

From its historic role in enforcing oppressive apartheid laws to modern-day accusations of corruption and brutality, the South African Police Service (SAPS) doesn’t exactly have the best reputation. As the Oscar Pistorius trial refocuses the spotlight on South Africa’s police, it seems like the perfect time to point out one division of the SAPS that is not just efficient and smooth-running, it’s downright lethal.

The Special Task Force – or STF – is the elite tactical unit of the South African police. Established in the mid-1970s, the Special Task force handles high-risk operations on land, sea, and air, including hostage rescues, counterterrorism and sniper missions.

The entry process to join the STF is grueling. In addition to high requirements for fitness and career performance, applicants must pass a 90-hour endurance challenge during which they’re not allowed to sleep or eat while completing demanding physical challenges. Only about 5% of applicants complete this phase, but those who do go on to receive world-leading training in weapons, unarmed combat, reconnaissance, wilderness survival and free-fall parachuting. 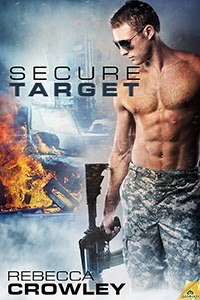 So what happens when one of these elite policemen faces an enemy he just can’t seem to defeat? In SECURE TARGET, my new release from Samhain Publishing, Special Task Force officer Bronnik Mason finds himself halfway around the world as he pursues an evasive serial killer. He’s sworn to bring him down at any cost, but when it comes to safeguarding the killer’s next target – beautiful Lacey Cross – Bronnik realizes this case could put his professional boundaries to the test.

Giveaway:
As an American living in South Africa, I’ve loved learning all about this unlikely branch of local law enforcement, and to spread the word about the Special Task Force I’m giving away a copy of SECURE TARGET! Do you just love those bearskin hats British soldiers wear? Do Canadian Mounties leave you in pieces? Leave a comment about your favorite “foreign-to-you” men in uniform and enter to win!

South African hostage rescue operative Bronnik Mason has been chasing a serial killer around the globe for over a year. Four women have already died, and he’s sworn there won’t be a fifth. Even if, this time, he has to offer up more than a few pints of his own blood.

But when it comes to safeguarding the killer’s next target, Bronnik realizes this case could put his professional boundaries to the test.

Having grown up in the shadow of two delinquent brothers, dental receptionist Lacey Cross is impeccably well-behaved, dutiful, hard working and bored. Until Bronnik storms into the office to sweep her into protective custody. Suddenly, her nondescript life just got a lot more interesting.

Racing against a blizzard, dodging uncannily accurate bullets, Bronnik finds his concentration getting blown all to hell. Before he realizes Lacey’s slipped under his skin, she becomes more than just a body he’s sworn to protect. She is the woman he will risk his own life to save whether she likes it or not.


Giveaway ends 11:59pm EST March 6th. Please supply your email in the post. You may use spaces or full text for security. (ex. jsmith at gmail dot com) If you do not wish to supply your email, or have trouble posting, please email maureen@JustRomanticSuspense.com with a subject title of JRS GIVEAWAY to be entered in the current giveaway.
Posted by Maureen A. Miller at 12:30:00 AM