1.      In your new book Cider Brook, your main character Samantha Bennett aims to solve a 300-year-old pirate mystery. What inspired you to throw pirates into the mix?

Pirates are endlessly fascinating! Samantha is a treasure hunter on a personal mission to prove a pirate buried treasure in quiet, little Knights Bridge. It’s a theory that’s gotten her into a bit of trouble. It also stirs up long-buried secrets in the out-of-the-way small town and gets the attention of Justin Sloan, a volunteer firefighter and Knights Bridge native who just might know more about buried pirate’s treasure than he’s willing to admit.

2.      Have you ever discovered a “treasure” of your own that someone left behind?

When I was seven, my family moved into an 18th-century carriage house in a small town much like Knights Bridge. An old man had lived there on his own for twenty-five years. It was quite the fixer-upper! We unearthed all sorts of “treasure” he left behind: musty books, a brass bed frame, an antique coffee-grinder, Depression glass bowls. It was great fun. It’s a gem of a house now. Our family homestead. My husband and I have lived in a number of old houses. I always find something left behind by previous residents that fires up my imagination.

3.      How did growing up in a family of nine with a storytelling father impact your desire to become a writer?

My three brothers and three sisters and I loved to listen to my father’s stories of his childhood in Holland and his years at sea as a Dutch merchant marine and my mother’s childhood in a remote part of the Florida Panhandle. Their lives before we came along were so different from what we knew growing up in small-town New England! Their stories brought to life things I’d never seen or experienced. I pictured Dutch canals and cathedrals, war-torn Holland, cramped ship’s quarters, Florida swamps and beautiful camellias. There’s no question their true stories inspired me to create my own fictional stories.

I dreamed of becoming a published writer but it was because I loved to write! I had little idea of what that meant. After sixty-plus books, I love to write as much now as I did as a kid up in my favorite sugar maple. I’m happiest as a writer when I put aside the “business of publishing” and dive into the story at hand.

5.      What do you love about the Swift River Valley series that sets the books apart from your others?

The Swift River Valley series returns me to my contemporary romance roots. It’s been great fun creating a small town and populating it with compelling, interesting people—and secrets! Secrets of the Lost Summer, the first book in the series, came to me in a whoosh. I could see Olivia Frost in Boston, picking up the pieces of her self-esteem after a friend’s betrayal and making the decision to take the bull by the horns and return to her hometown and open an inn. I could see Dylan McCaffrey, a wealthy ex-hockey player, getting Olivia’s letter to come clean up his eyesore of yard…at a house he didn’t know he owned in a town he’s never heard of. And Grace Webster, a starchy former teacher now in her 90s, with a fateful secret that affects Olivia and Dylan and surprises everyone in Knights Bridge. I knew I had to write this story! And as I wrote Secrets of the Lost Summer, I knew this out-of-the-way little New England town would yield more stories. 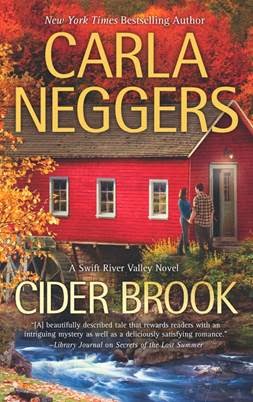 Being rescued by a good-looking, bad-boy firefighter isn’t how Samantha Bennett expected to start her stay in Knights Bridge, Massachusetts. Now she has everyone’s attention –especially that of Justin Sloan, her rescuer, who wants to know why she was camped out in an abandoned old New England cider mill.

Samantha is a treasure hunter who has returned to Knights Bridge to solve a 300-year-old mystery and salvage her good name. Justin remembers her well. He’s the one who alerted her late mentor to her iffy past and got her fired. But just because he doesn’t trust her doesn’t mean he can resist her. Samantha is daring, determined, seized by wanderlust –everything that strong, stoic Justin never knew he wanted. Until now…

New York Times bestselling author Carla Neggers’ books have been called “riveting,” “magical” and “stunningly effective.” Now she returns to the lush Swift River Valley with the irresistible story of one woman’s quest for treasure and redemption.

Carla Neggers has been spinning stories ever since she climbed a tree with pad and pen at age 11. Now she has millions of copies of her books in print in more than 30 countries, and more than two dozen of her books have placed on the New York Times, USA TODAY and Publishers Weekly bestseller lists. Cider Brook is the third novel in her acclaimed Swift River Valley romantic mystery series that launched with Secrets of the Lost Summer and That Night on Thistle Lane. Secrets of the Lost Summer spent four weeks on the New York Times bestseller list and garnered rave reviews, including a starred review from Booklist and a Top Pick from RT Book Reviews. Growing up in rural western Massachusetts with three brothers and three sisters, Carla developed an eye for detail and a love of a good story. Her imagination, curiosity and sense of adventure are key to creating the complex relationships, fast-paced plots and deep sense of place in her books.