Congratulations to "Mae C.", "Joyce M." and "Jonetta", the winners in Pamela's giveaway. Thank you to all who participated!

Cops – those in uniform out on the streets, detectives at the scene of a homicide or in an undercover situation setting up a drug sting.

Special Agents – working in one of the ABC type agencies, whether state or federal.

Covert Operators – belonging to one of those agencies without letters, the kind whose existence is always denied, orperhaps employed by a private firm working in tandem with the government.

There’s something about these types of heroes, this type of take-charge, in control, unadulterated alpha male that fascinates that part of us that’s pure female.

Added to all that alpha allure, if he’s good at what he does, is a sharpness, a mental edge that makes him oh so much more intense. By the very nature of their jobs, these heroes are a cut above. They’re wary, non-trusting, and observant to a fault, rarely missing anything.

At least on the surface.

Underneath, that same nature that makes them so good at their jobs can be their downfall – in a major way – when it comes to meaningful relationships.

Emotions trip them up.

Confuse the heck out of them.

And those strong, mentally sharp, alpha heroes can’t stand to not be in control.
That shift of control gives me the shivers. Those moments in a story, whether I’m writing my own stories or immersed in someone else’s book, when that oh-so-strong alpha is at his most vulnerable. All because of that one female he’s unwittingly handed all his power. 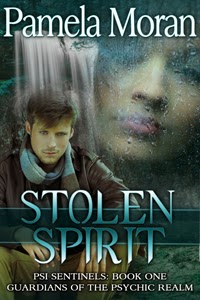 In STOLEN SPIRIT, Jake Carrigan is a broken cop, one who’s left the force because of guilt. Guilt over his dead brother – the one he couldn’t save. And guilt over his dead ex-girlfriend, the one he wasn’t there for when she needed him the most. Guilt because he’d turned away rather than allow her to see his pain. Now, he’s hearing her voice in his head.

***Excerpt STOLEN SPIRIT***
Already tight muscles at the back of his neck clenched. He took a wary glance around the empty room.
Shit. Why the hell was he already hearing Hannah's voice?
He hadn’t tasted the booze. Not yet. Not a drink in months. On the table in front of him, only a single shot low, sat the bottle of whiskey.
Jake pushed away from the table, the legs of his chair scrapping over the scarred, hard wood floor. He stood and shoved both hands through his hair. Hair desperately in need of a haircut.
Close to four months since he’d had a drink.
New Year’s Day resolutions and all that crap. Promises to his worried sister, promises to himself.
A promise he was about to break.
Over six months since he’d discovered Hannah had died. Alone. Without him. He hadn’t even known she was sick.
She didn’t tell me, didn’t let me know.
With both hands splayed at his waist, he glared at the shot glass.
She could have reached him, if she'd wanted. If she'd bothered to try.
***END Excerpt of STOLEN SPIRIT*** 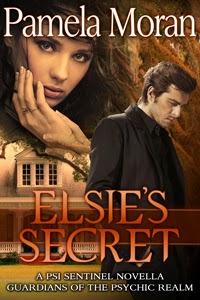 Sebastian Alexander, in ELSIE’S SECRET, is a man who keeps his own secrets close. A covert agent, he’s never let anyone, especially not any woman, interfere with his mission. Not even Elsie, a woman who’d had the potential to hold his heart hostage. But when he finds her where she isn’t supposed to be, when she’s endangered his operation, he starts questioning himself.

***Excerpt ELSIE’S SECRET***
Don’t go there, old boy. If she hadn’t been here, he wouldn’t be distracted from this reconnaissance mission. Wouldn’t be in this predicament.
And he wouldn’t have realized how much he still wanted her. Or how dangerous that desire was to his concentration. In his line of work, concentration very often meant the difference between life and death.
Besides, a future with Elsie had never really been possible, no matter how foolishly he’d once wanted one.
***End Excerpt of ELSIE’S SECRET***

READER QUESTION:  What kind of qualities does a heroine need to have to be a match for an Alpha Hero? Should she be strong from the beginning, or do you like to see her grow into her strength?

GIVEAWAY:  Win one of three copies of ELSIE’S SECRET, the opening novella for the PSI Sentinels: Guardians of the Psychic Realm.

About Pam:
Whether painting, out on a photo shoot or writing, Pam has always had a bend toward the creative side of life. Her favorite is when she can combine any of those with travel. Places get into her blood and she loves to explore the possibilities, always with characters and a story in mind.

An astrologer for most of her adult life, Pam has been known to see auras & the occasional ghost. Considering she lives in a haunted house in the mountains of southern California, this keeps life interesting.


Giveaway ends 11:59pm EST Feb. 23rd. Please supply your email in the post. You may use spaces or full text for security. (ex. jsmith at gmail dot com) If you do not wish to supply your email, or have trouble posting, please email maureen@JustRomanticSuspense.com with a subject title of JRS GIVEAWAY to be entered in the current giveaway.
Posted by Maureen A. Miller at 12:30:00 AM