Women on the Edge in 19th Century England!

Congratulations to "Taurus", the winner in Jacki's giveway. Thank you to all who participated!
How would you have coped as a woman in the socially-constrained world of 19th Century England? Would you have been prone to fits of the vapors and needing regular dosing with Laudanum? Or would you have fought the constraints? Riding your horse astride? Voicing your own opinions?

How to create a feisty historical heroine, who as readers and lovers of suspense we expect, is the one of the challenges of writing historical suspense. Lady Henrietta Harcourt in
A Code of Love is a brilliant linguist but she has to hide her talents. Ladies weren’t supposed to demonstrate or discuss their intellectual interests or achievements.

Besides being feisty as a requirement for our suspense heroines, we want to see our heroine’s connections. As women, we take care of a lot of people in our lives--our partners, our children, our parents and our friends. Henrietta like every woman has family responsibilities. After both her parents die, Henrietta runs the household taking care of her uncle, England’s foremost code breaker and her two brothers.

All is running smoothly in the Harcourt household until Henrietta’s older brother vanishes while on a clandestine assignment in Paris. Can Henrietta use her talents and skills to find her brother and remain under the radar of the newly appointed head of England’s Intelligence office, the handsome, rake Lord Cord Rathbourne?
Releasing on Valentine’s Day, February 14!
A CODE OF LOVE 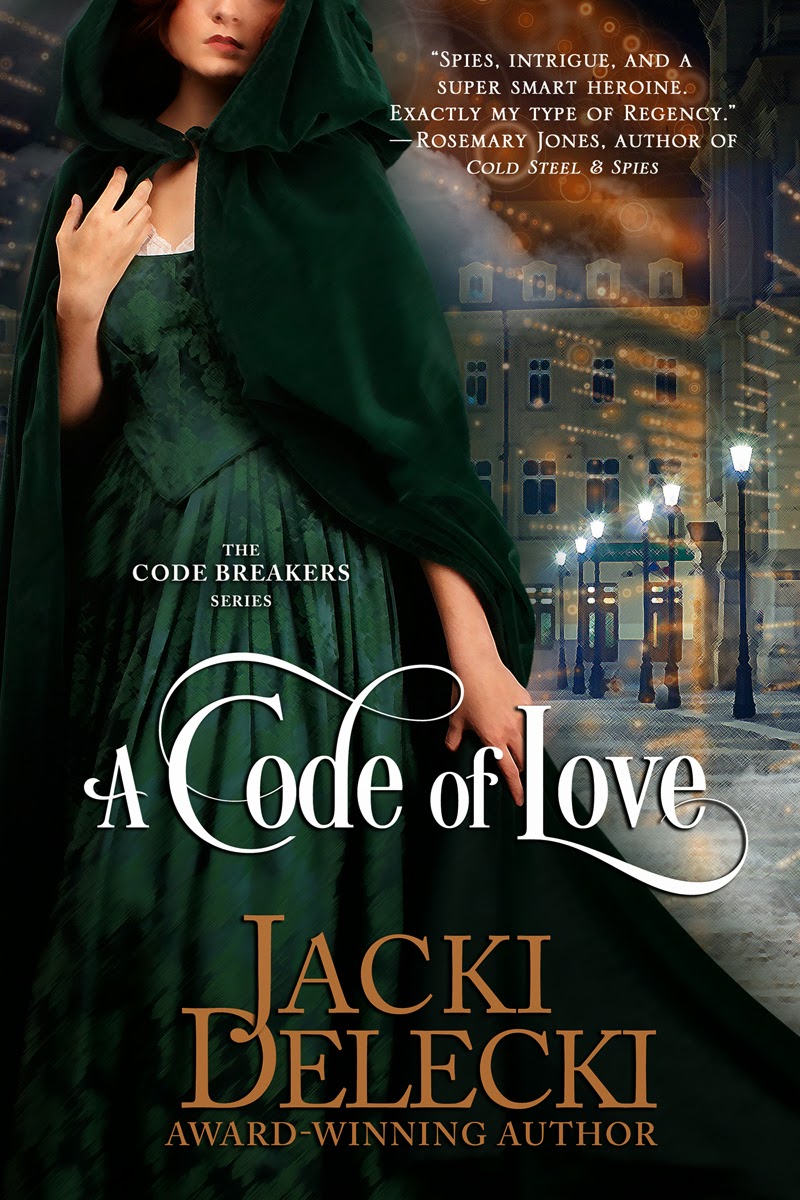 “They call themselves gentleman, pshaw.” Henrietta plunked her boot into a muddy hole on the sidewalk outside the Abchurch secret offices. Cold water seeped through to her toes. “Arrogant, self-righteous….” The unpleasant feel of wet stockings only served to fuel her anger at the clerk and all the men in the Abchurch office, the bastion of male superiority.

Her body shook from the insult and her soaked clothes. The clerk, who had refused her admittance to speak with Sir Ramston, had implied she was a spinster worried for naught about her brother. She bowed her head into the driving rain, glaring down at her sodden black boots. Her dark mood festered like the foul weather plaguing London this last week of April.

The impact was sudden. She stumbled backward, her arms swung in an outward arc. The slippery mud grabbed at her boots.

The man thrust his hands in the mud beside her shoulders trying to stop the impact of his large body driving her further down on the wet ground.

The shock of the fall left her immobile and speechless. She was flat on her back in the middle of a main London throughway with Lord Rathbourne’s hard body pressing against her. The huge man loomed over her, grinning with all the nerve of a blatant libertine. Looking up into his chiseled face, she noticed the small laugh lines surrounding his bright eyes that seemed to be laughing back at her.

Sign up for my newsletter to receive excerpts and prizes from the book. Http://www.jackidelecki.com

THE CODE BREAKER SERIES
Men and Women from the class of privilege risk their lives to defend England against the treacherous designs of Napoleon. They confront disaster, scandal, and passion as they pursue their code of honor and love.

A CODE OF LOVE

In his new, undisclosed position as Director of English Intelligence, Cord faces more peril keeping the brilliant, Harcourt family of code breakers safe than he did as undercover spy in Napoleonic France.

Cord’s passionate attraction for the indomitable Henrietta hasn’t diminished in his four years abroad, but neither has Henrietta’s memory of his libertine past.

Henrietta and Cord become entangled in a web of international intrigue, danger and white hot passion when Henrietta’s brother, Michael, on a clandestine assignment in Paris vanishes.

Read more about the Code Series
Men and Women from the class of privilege risk their lives to defend England against the designs of Napoleon. They confront scandal, personal crisis, and love as they pursue their code of honor and love.

The second book in the series follows the adventures of Michael Harcourt’s escape from France. Michael has promised the Sisters of Visitation that he will escort a mysterious French orphan to England in exchange for the help of the Sisters in his flight from Paris. Follow their adventures dodging French and British spies hot in pursuit of the Lord, his bodyguard, their charge and the Code Book.

Next in the series is the story of Kingsley. Escaping the scandal of seducing his brother’s affianced, he finds his first job protecting Michael Harcourt daunting. His charge is shadowed, shot, and eventually flees Paris with a child in tow.

To follow are the adventures of Amelia Wentworth. Recruited by the English secret agent, La Bataille, Amelia agrees to travel to Portugal carrying vital secrets for England. Secretly, she is in pursuit of Michael Harcourt, but her journey is fraught with unexpected entanglements including capture by Spanish partisans.

Last is the story of Gwyneth Rathbourne and Lord James Rannulf. In her first season, Gwyneth discovers that puppy love grows in startling ways.

Giveaway:
Jacki will be giving away a $10 Amazon card and Kindle Book of  A Code of Love.

Giveaway ends 11:59pm EST Jan. 31st. Please supply your email in the post. You may use spaces or full text for security. (ex. jsmith at gmail dot com) If you do not wish to supply your email, or have trouble posting, please email maureen@JustRomanticSuspense.com with a subject title of JRS GIVEAWAY to be entered in the current giveaway.