Congratulations to "Trish J.", the winner of Jody's giveaway. Thank you to all who participated! 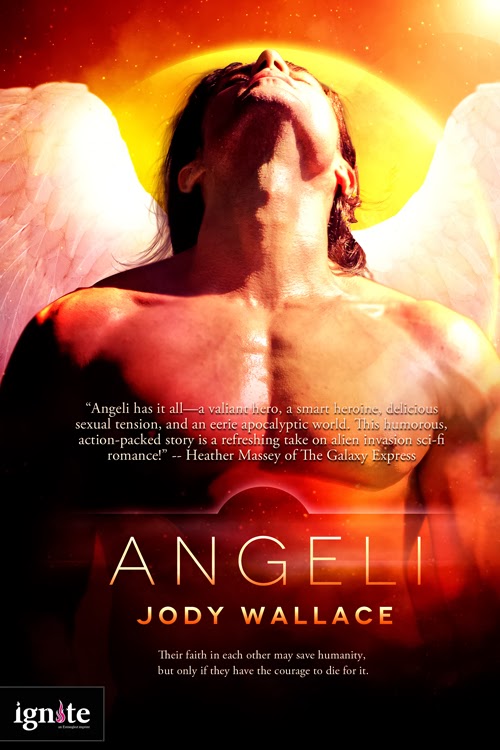 Despite the fact that my latest release, ANGELI, is a romantic suspense set during the apocalypse, I've never been a devoted romantic suspense reader. Not that I avoid the plethora of police procedurals, serial killers and secret organizations readers can find in romance fiction, but my tastes -- like my new book, which is a science fiction romance -- veer towards paranormal, urban fantasy, science fiction and the like. For that matter, so do my tastes in television.

When discussing our rather (ahem!) extensive TV recording schedule with my husband the other day, though, I realized all the supernatural shows we love are also closely tied to suspense, romance, and yes, to law enforcement organizations.

Agents of Shield? (Hubby is a huge Marvel comics fan -- gotta see that one!) A secret-ish governmental organization charged with policing supernatural and alien phenomena, items and occurrences.

Sleepy Hollow? The heroine and one of the primary secondary characters are
cops, and the characters' goal is to stop the Biblical apocalypse.

Grimm? The hero and his best friend are cops, and they not only have to deal
with supernatural stuff and relationships but regular cop stuff.

Haven? The heroine and one of the heroes are cops, dealing with strange
events in the small town of Haven, Maine.

Intelligence? Though we may not stick with this one -- the hero is Jake 3.0
(which we also liked) as portrayed by Sawyer from LOST and one of the
heroines is Red from...

Once Upon A Time? OUAT's heroine, early in the show, had to step into the
position of the town's sheriff, although the show is not as procedural as
others we watch.

Castle? Heroine is a cop and the writer hero helps her solve crimes.
Normally we wouldn't watch this because it has no paranormal, but...Nathan
Fillion. Firefly. Yep.

Each of these popular paranormal shows is, in its way, a police procedural.
So apparently I adore this subgenre and didn't even realize it!

Often in these shows, the suspense element and ticking clock that keep the
show rolling involve solving a crime, saving a life, or figuring out a
dangerous paranormal phenomenon. Usually all of the above, in fact. The
investigative process provides a natural sequence of events and eventual
climax that lends itself to 42 minutes of swashbuckling, wisecracking,
cinematic good fun.

In ANGELI, the hero is a career soldier, and the plot does revolve around saving a life. Actually his goal and the heroine's goal is saving all the lives on the planet earth after to a scientific slash paranormal phenomena people on Earth have been assuming is a sort of Biblical apocalypse...sans Ichabod Crane. Granted, the book took me more than 42 minutes to write but I hope it achieves some of the epic drama and pulse-pounding excitement of all
the wonderful shows we have on American television right now.

Giveaway:
What are your favorite TV shows? Are you a police-on-TV fan, a supernatural
TV fan, a reality TV fan? What keeps you coming back to stories with
suspense elements time and time again? Leave a comment for a chance to win a
$10 Amazon gift card to buy yourself a romantic suspense novel or an episode
or two of one of these fun TV shows!

About the Author
Jody Wallace grew up in the South in a very rural area. She went to school a
long time and ended up with a Master's Degree in Creative Writing. Her
resume includes college English instructor, technical documents editor,
market analyst, web designer, and general, all around pain in the butt. She
resides in Tennessee with one husband, two children, two cats, and a lot of
junk.

Gregori's last mission is to save Earth from the demons threatening to take control. He doesn't care if he survives as long as he averts the impending apocalypse-until he meets Adelita, a human refugee, whose spirit and determination give him a renewed reason to fight. And live. He's falling for her, despite the fact he's told her nothing but lies and there can't possibly be a future for them.

Adelita can hardly believe the archangel Gregori, sent to save mankind, has lost his faith and his edge. After he saves her from a demon attack, she vows to help him recover both by any means necessary. But can she keep her own faith when she learns the truth about who and what Gregori really is?

Link to an excerpt: http://jodywallace.com/books/angeli/

Giveaway ends 11:59pm EST Jan. 27th. Please supply your email in the post. You may use spaces or full text for security. (ex. jsmith at gmail dot com) If you do not wish to supply your email, or have trouble posting, please email maureen@JustRomanticSuspense.com with a subject title of JRS GIVEAWAY to be entered in the current giveaway.
Posted by Maureen A. Miller at 12:30:00 AM