Sylvie Bissette may be a tough chick with a dark past, but she's also Harbor City's most sought after fashion blogger, the High-Heeled Wonder, and not just by the stalker hot on her trail. Who better to sit down with and get your top seven fashion questions answered? 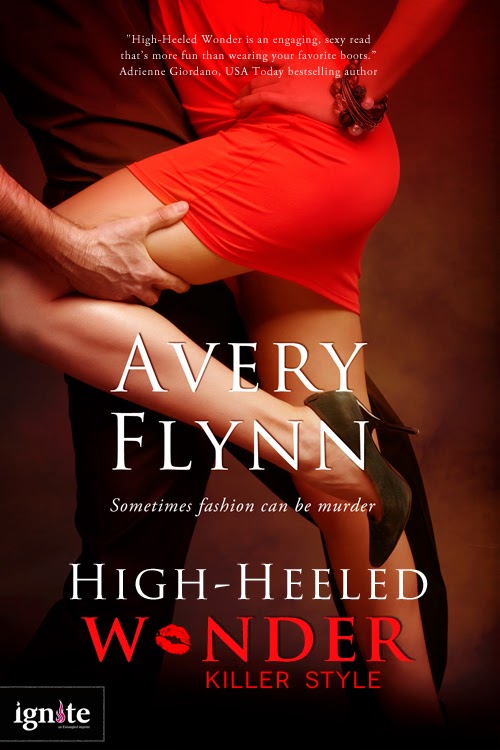 Of course. Go with what you love - unless it's Crocs and then keep that a lifelong, deep dark secret.

2. Best accessory?
Something that sparkles - or a hot guy.

3. Perhaps a certain hot private investigator/bodyguard/pretend boyfriend?
Tony's okay, if you go for that alpha, strong silent type with biceps that would make a blind woman salivate. Forget that last part. I don't know what came over me. Can we get back to the fashion?

4. Favorite fashion quote?
That's easy, Gilda Radner said she based her fashion choices on what didn't itch. I love that.

5. You can either go out in barefoot or in just your underwear. Which one do you choose?
Is Tony there? That man could make me think just undies outside is totally acceptable.

6. Do you match your underwear to your outfits?
There is a reason why when Tony came to search my apartment that first time he found 12 matching bra and panties sets in every color under the sun drying on my shower rod. The answer to that is yes. I like the extra umph of something naughty under my clothes.

7. Can a skirt ever be too short?
That depends on your agenda. As Dorothy Parker once said, “If you wear a short enough skirt, the party will come to you.”

Isn’t that the truth? Here’s a quick excerpt from High-Heeled Wonder. Check it out and then enter the High-Heeled Wonder Shoes, Swag and Books Extravaganza Giveaway for your chance to win a $100 DSW gift certificate, books from Entangled Ignite authors releasing in January (Avery Flynn, High-Heeled Wonder; Jody Wallace, Angeli; Julie Rowe, Molly Gets Her Man; Caridad Pineiro and Cathy Perkins, Love International Style box set) and more! (see below)

“Do you have any garlic?” he called.

Sylvie glanced up from her laptop and leveled her slightly bleary green eyes on him. She’d been sitting there in her own world, trying to get the rest of the week’s posts uploaded before she had to give up her laptop to his computer guy, Carlos. For the past two hours she’d been typing away and muttering that gray being the new black was the stupidest thing she’d ever heard.
He’d always figured black was the only black, so he’d stayed quiet.

“Garlic?” Her breathy voice twisted something inside him.

“Yeah, you know, it’s a white bulb thing. You use it for cooking.”

She rolled her eyes. “I’m laughing so hard here you’re making my sides hurt.” She tilted her head back and rolled her shoulders before arching her back in a long stretch that lengthened specific parts of Tony’s anatomy.

Peeling his gaze away, he forced his gaze back to the can of tomatoes in his white-knuckled grip. But his ears, attuned to her every move, caught the scrape of her chair on the tile floor, the soft patter of her feet, and the creak of the refrigerator opening. The mental image of her ass bending over in those second-skin-like yoga pants as she searched the fridge was almost worse than seeing it in real life.

A soft giggle brought him out of his fantasy. That sliver of difference between his imagination and the even-better reality hit him smack on jaw.

She stood with one hip cocked and a smirk on her face. “Careful there, Iron Man, or you’ll dent the can.” She tossed the garlic bulb to him like a pop fly.

He stifled a groan and caught the garlic before it hit him between the eyes. “Thanks.”

She hopped up onto the island and swung her legs over the edge. “You’re cooking?” She swept up her thick hair into one hand then looped it around until it formed a complicated knot, which she locked into place with a pencil.

His fingers itched to pluck it out and watch the honey strands fall past her shoulders. The lip of the tomato can bit into his palm. “Making gravy.”

She jumped down from the island and tugged a yellow apron from a drawer, pulling it over her head. “I just uploaded my last post. What can I do to help?”

The apron strings circled her waist, drawing his attention to her curves. He had to get the woman out of the room or he was going to go all Hulk on the defenseless tomato can. “I got it.”

“No doubt about that, but I need something to do that doesn’t involve stalkers, murderous drivers, or the trend of empire waists in the latest collections.” She yanked a stock pot from a cupboard. “Come on, throw a girl a bone.”

So tempting. If she only knew…

"When a fashionista and her bodyguard get tangled up together, watch out for sizzling sex and surprising plot twists."  New York Times best seller Rebecca York

Tony Falcon, an investigator from the other side of the tracks, is the olive oil to fashion blogger Sylvie Bissette's Evian water, but it's not just her temper he's inciting. When Sylvie's stalker almost runs her over in broad daylight, Tony must pose as her boyfriend to infiltrate the close-knit fashion community. In a world full of overblown egos and cutthroat ambition, Sylvie and Tony must work together to find her stalker before she ends up with a literal knife in the back.

About Avery Flynn
Avery Flynn loves a hockey-addicted husband, has three slightly wild children and is desperately wishing someone would invent the coffee IV drip. Find out more about her on her website (www.averyflynn.com), Twitter (@AveryFlynn) or Facebook (facebook.com/AveryFlynnAuthor). She posts all sorts of fashion, reading and hero inspiration pictures on Pinterest (pinterest.com.AveryFlynnBooks).