Writing on the Edge

Congratulations to "Brooke", the winner of Tiffinie's giveaway. Thank you to all who participated!

I love not knowing what's going to happen when reading a book, and sometimes in life. There is nothing that makes me glued to the page, or keyboard, than not knowing how characters are going to get out of deadly situations. Have you ever talked out loud to the TV or at the book you are currently reading? "Oh, no, don't go there!" is a statement I always directed at the writer of a particularly good suspense when I can't conceive of how the writer is going to get the characters out of the situation.  Yet, when the writer "goes there" I love it!

I'm one of those annoying people who always know who the killer is way before everyone else. My family hates to watch movies with me. I am sworn to keep my mouth shut during the movie or I don't get any popcorn. 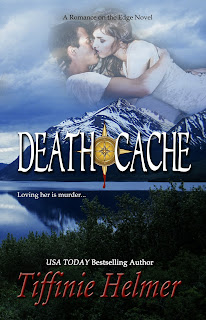 When I write, I have a general (very loose) idea of where we're going, but not how we're going to get there or how to survive the journey—and many of my characters don't survive the journey. That's right, I kill people for a living. It's my favorite thing to do. I'm awful, horrible, downright nasty, and my characters (the smart ones) quake in my presence. At least, I like to think so. In reality (what's that?) they are really the ones who toy with me.

Speaking of games: My latest book, DEATH CACHE, was released on Black Friday and plays very well into what I'm talking about here.

She shouldn't have played…
Gallery owner Tern Maiski has always had a way with men, but the one she gave her heart to disappeared without a word. Now he's competing alongside her and four others in a high-tech treasure hunt, and her pride isn't the only thing on the line. So is her life.

He doesn’t play by the rules…

Geophysicist Gage Fallon's relationship with Tern has been cataclysmic from the beginning. He cared too much, too fast and their passion threatened to consume him. Now he's back on firmer ground and competing in a game that will risk more than his heart.

Once their group is dropped off in a remote area near the Arctic Circle, it quickly becomes clear that instead of hunting for treasure, they're the ones being hunted. And the killer is dead serious about caching them in.

This book is my most thillerish. When I started DEATH CACHE, I had the characters and the premise. I didn't know who was going to live or who was going to die, let alone who the killer was. I was just as surprised as the reader hopefully will be. It kept me pounding away on the keyboard, excited every day to write this book and find out whodunit. Also, how in the world were my hero and heroine going to get together if they did actually survive.

Now this writing process is not only exciting, but it's frustrating as hell. There are times when not having a clue, stumps me and I can't write at all. Those are very dark days, my friend. My agent is trying to get me to move into the camp of the plotters so she can sell me on proposal. That sounds great (in theory) but takes the fun out of writing on the edge.

Here is snippet of DEATH CACHE:

He pulled her to her feet and kept pulling until she was pressed up against him. “And you’re right. You scare the shit out of me.” His hand came up and framed her face, the other anchored behind her back keeping her close. “But I scare you too.”
Before she could protest, his lips seared hers. Heat erupted between them and flushed her body with enough warmth to melt the glacier they stood precariously on.
Oh God, she’d missed him. The way their bodies naturally curved together, the way her insides liquefied in readiness for him, and the way his body hardened to steel. She’d loved his body, the way it was roped with muscle, how his strength made her feel feminine and protected. She’d loved lavishing attention on his body for hours on those lazy days when they didn’t get out of bed. Her fingers itched to touch his skin again, feel his flesh hot under hers as he—
“I’m not the only one who wants to do wicked things,” he murmured, his voice husky with arrogance. He nipped the skin below her ear, and licked the sting.
Her fingers curled into his shirt for a moment, and then she pushed him away. He slipped on the ice and fell on his ass at her feet. She stood over him, part of her enjoying the view, the other part already missing the heat of his hands.
“The wicked things I want to do involve sharp imple­ments.” She brushed her hands over her clothes as though that would erase his touch and how he made her feel. “I found the cache. You can carry it back to camp.”
Trying to look as if she wasn’t running away, Tern took her time and carefully watched her footing as she de­scended the ice. She could hear Gage cursing behind her as he struggled with the cooler and his slippery toehold on the glacier.
Served him right for putting the moves on her, like he had to disprove her earlier statements. There was no way in hell she was afraid of him.
A shiver caught her by surprise.

DEATH CACHE is set in a very remote part of Alaska, which is saying something as most of Alaska is remote. I would like to hear about the most remote place you have ever visited and what your impressions were.

Giveaway:
I will be giving away a digital copy of DEATHCACHE to one lucky commenter.

Author Bio:
USA Today Bestselling Author Tiffinie Helmer is always up for a gripping adventure. Raised in Alaska, she was dragged "Outside" by her husband, but escapes the lower forty-eight to spend her summers commercial fishing on the Bering Sea.

A wife and mother of four, Tiffinie divides her time between enjoying her family, throwing her acclaimed pottery, and writing of flawed characters in unique and severe situations.

Giveaway ends 11:59pm EST Dec. 3rd. Please supply your email in the post. You may use spaces or full text for security. (ex. jsmith at gmail dot com) If you do not wish to supply your email, or have trouble posting, please email maureen@JustRomanticSuspense.com with a subject title of JRS GIVEAWAY to be entered in the current giveaway.