When Bad Boys Work for the Good Guys

Congratulations to "Martha L.", the winner of Kerrigan's giveaway. Thank you to all who participated!

Luca Ramirez has an anger management problem due to a violent childhood, impulse control issues, commitment phobia, a potty mouth that would impress a sailor and a truck driver, a disregard for authority, and he’s killed five people.  Is he my murderer?  Nope!  He’s an FBI Special Agent, and the hero of my new romantic suspense, A RIGHTEOUS KILL.

I think we all love to love that “bad boy.”  I’d love to hear who your favorite naughty character is, whether he’s from books, movies, or TV. 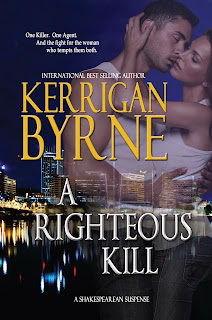 So what attributes does Luca have to recommend him?  Well, of course there’s the tall, dark, and dangerous thing.  He’s one of the best agents the Bureau has, and what is sexier than a man who’s good at his job?  Driven to turn the darkness inside him into something good and productive, he fights the demons of his past while also battling a different kind of evil.  A serial killer who preys on the women of his city.  I think one of Luca’s most attractive traits is the absolute confusion he feels when he begins to fall in love with one of the killer’s surviving victims.  To watch a tough man get his first taste of tenderness always unravels me.  It’s fun to see him fighting his feelings because of fear, knowing that eventually love will win out and he’ll have to surrender keeps me glued to the page.
Enjoy an excerpt from A RIGHTEOUS KILL, and watch the sparks fly.

A silent shadow fell behind her.  A strong hand silenced her shocked cry as she was wrenched out of the van and against a warm stone wall.

“What the hell were you doing?” Luca hissed against her ear.

“Nmmphing,” she said against his hand.

A callous on his palm abraded her lip.  It sent shivers straight to her lady bits.

“Breaking into his locked vehicle without a warrant isn’t nothing.”  He held her secure against his body as he reached out and locked the door with his elbow before closing it as quietly as he could.  She noticed he took care not to touch it with any part of his skin.

Hero was surprised he could pull this off what with all the struggling she did.  The wall of hard muscle pressed against her back reminded her just how thin the fabric of her skirt was.

And she thought the inside of a kiln was hot.

Before she did something crazy, like bend over and offered her ass like a bitch in heat, Hero jabbed his torso with the sharp wire hanger still clutched in her hands.

Her inner victory celebration was cut embarrassingly short when, instead of released, Hero found herself face first against the van window, disarmed, and pinned with the full weight of Luca’s body against hers.

His hand was still over her mouth.  His other arm banded her elbows to her sides effectively rendering her immobile.

She’d never been so turned on in her entire life.

Thoughts along the lines of, Yes, Agent Ramirez, I’ve been a naughty girl, crowded out all the reasonable ones.

“Do you know how much trouble you’re in?” Luca growled against her ear.

Do you? She thought.

I sincerely hope you enjoyed meeting Special Agent Luca Ramirez, the first Hero in my Shakespearean Suspense series.  Here are the buy links for A RIGHTEOUS KILL:

Also, please check out my charity causes.  A percentage of the proceeds of my books go to the following:

GIVEAWAY:
And, again, I’d love to hear who your favorite “bad boy” character is.  You know the type, they could just as easily be the villain if they weren’t so damn sexy!  Comment below and I’ll send the winner their choice of an ecopy or paperback copy of A RIGHTEOUS KILL.

Giveaway will end on December 3rd at Midnight PST.  Please leave your email address with your comment.  Thank you!