I’m thrilled to be a guest on Just Romantic Suspense. My most recent romantic suspense release came out a few weeks ago from Entangled Ignite. TWO CAN PLAY is an unusual story with the flavor of urban fantasy, but grounded in reality…at least that’s what readers have said. I’ve been thrilled by the positive reviews of the story. 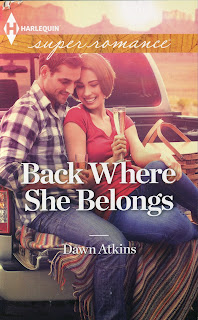 My latest news is that another romantic suspense—BACK WHERE SHE BELONGS, from Harlequin SuperRomance—has been nominated by Romantic Times Book Club for a Reviewer’s Choice Award for 2013. Talk about a thrill! The honor is especially sweet because, after publishing 30-some books, I can say this book was the one I struggled the longest and hardest with.

It tells the story of a woman returning to the small town named after her family, which she escaped after high school, to investigate the car accident that killed her father and put her sister in a coma, aided—and occasionally opposed--by her high school flame.

Why was this book so hard? The plot flummoxed me, for one, because it involved technical issues I had to research like crazy—electric cars, batteries, factory functions, brain injuries, recovering from a coma, car accident reconstruction, and on and on. On top of that, the characters remained murky to me far too long. I have to say that by the time I finished the extra revisions on the book, I was sorry to say farewell to Tara and Dylan, who’d become as dear to me as family (well, not quite, but you get the idea).

There is always a burning fear when I write a book that I’ve chosen too difficult a path for the story and the people in it, that I’ve stretched beyond my writerly capacity to convey their journey in a compelling, satisfying and believable way. When it works out, when I reach that satisfying conclusion, the elation is worth every sweated-out word, especially when readers tell me how much the story meant to them. That’s why I do what I do. The book is available as an ebook.

Sharing this with you has motivated to get back to my next romantic suspense—A COP IN HER HEART for SuperRomance. It’s the story of Julie Turner, a female cop from a law enforcement family, who must investigate the murder of her roommate, killed in an attack in their apartment. Julie was struck on the head during the attack. The bullet that killed her friend came from her own gun, though she can’t remember exactly what happened. And, yes, I’m nervous--as always--about getting the story right. So far, though, I adore Julie and her hero--Lucas, her former Training Officer.

So…I’d better get back to work, eh?

Thanks again for allowing me to visit!

Live. Breath. And Believe — to Rena Novo there’s nothing better than being a part of the most popular virtual-reality game—EverLife…until she’s given a Quest to evict her best friend from the society she’s come to love. If she completes the job—she’ll rise to the top, but a sexy recruit is stirring a different kind of passion within her and making her question everything that makes her life complete.


Hunting for his missing sister, investigative reporter Gage Stone goes undercover in the gaming cult that’s taken over his sister’s life. But his biggest obstacle is the sizzling attraction between he and Rena, the extremely hot gamer assigned as his trainer. As their attraction builds, Gage realizes his sister isn’t the only one he can’t leave without. Now he must convince Rena the rhetoric the company’s pushing is just a plot that will culminate in the deaths of hundreds… before she turns him in and gets them all killed.

Excerpt:
“What’s not to like?” He caught her gaze and got a full-on punch of heat. The two of them naked on all that bed sounded pretty damn good to him. The spark in her lake-blue eyes said she agreed. When she held out her hand, he almost yanked her close for a taste of those soft lips of hers.

“Your jacket?” she said, tilting her head.

He shrugged it off. She watched him, her blue eyes flaring hot, like the pilot light to her sex drive. Should he go for it or take a pass?

He wanted her–he was a man with a pulse, for God’s sake, of course he wanted her–but he had to do what was smart.

He dragged his gaze away, cleared his throat and looked around. “You’ve got some pricey stuff in here. God help him, he found himself staring at the bed again.

“I go after what I want,” she said, low and sexy, her eyes glowing hotter than ever.

She smelled sweet…edible. Was it coconut? Maybe just a taste.

“And what is it you want?” he asked, telling her he wanted it, too with a tone that registered in her eyes like the flick of a gauge needle.

She hesitated, stepped back, on guard. “It’s more important what you want, Gage. Why are you here? In Lounge Life?”

His answer counted big, he knew. “I’m a gamer. I needed a job.” What would a true believer say? “I like what’s here. It’s like a family.”

“You don’t have one already?” Her eyes glittered with suspicion.

“Not really.” His sister Beth was all he had and she was missing. That was his real reason to be here.

“Lifers are my family,” Rena said, emotions rippling beneath her words, like muscles under an animal’s pelt.

Their gazes locked and the connection went abruptly personal. He saw a lonely little girl behind her eyes and she, no doubt, caught a flicker of the grim kid he’d been.

The past reeked, but it was gone.

An electric thread sizzled between them. “What I want is right here.” He looked her up and down, wanting in, letting her see that. He liked the spark in her eye, the challenge in her half-smile, not to mention that tight, strong body of hers—everything in the right place and then some. He was pretty sure it was her hair that smelled of coconut. “How about you?”

She moved grabbed his belt and tugged, telling him all he needed to know.

Author Bio:
I always wanted to be a writer–from the moment I put fat pencil to brown-lined paper in second grade to write an elaborate story using all the spelling words on our list.
Though I always wanted to be a professional writer, I wasn’t sure I had the stuff, so I graduated from college with a teaching degree and taught elementary school–second and third grades (the best)–and then began freelance feature writing for newspapers and magazines, local and national.

I left teaching to work in public relations–skills I use today in my job as a writer/editor for the Arizona Education Association.

I met my husband, David Weiss, my very own hero, in 1980, on an airplane. We made the “love thang” permanent in 1985, when we married taking our Hobie sailboat to San Diego for our honeymoon. Then in 1990, we welcomed a son into our lives. He continues to be the light of our life together.

My first romance credits were two stories in True Love magazine. I went on to write a sexy romance in 1983, which was rejected–sniff.

Years later–1996–I got serious about getting published. Though I endured some rejections as I honed my craft, in 1998, I sold the first of two short romantic comedies to Kensington Publishing–Getting Zack Back, published in December. In July 2000, Baby Makes Three was released. After coming in second among published authors in a Harlequin Duets contest, I sold to Harlequin in 2001, quickly selling another comedy. In addition to Duets, I write for Temptation, Blaze and, the new comedy line Flipside.


Most of my hobbies–sailing, scuba-diving, playing the piano (badly)–have gone by the wayside as I devote all my non-family spare time to writing. I live in the Phoenix area with my husband and son, who proudly brings my books to his teachers and swears he doesn’t read them–except for the funny parts.