Congratulations to the winner of a digital copy of OUT OF TURN, "Cheryl". Thank you to all who participated!

December 17th marks the release of OUT OF TURN, book four in The Kathleen Turner Series.  If you’re not familiar with the series, it revolves around Kathleen Turner — a young woman who came to Indianapolis in search of a career and instead found herself drawn into a relationship with Blane Kirk.  Navy SEAL turned high-powered attorney, Blane Kirk is the playboy who views women as an expendable accessory, until he meets Kathleen.  Kade Dennon is an assassin-for-hire and genius hacker — and is also Blane’s brother.  Kade knows Kathleen is off-limits, but can’t stop himself from feeling things he’s never felt before for any woman.

At the end of TURNING POINT, book three in the series, Kathleen and Blane have a falling out after their engagement.  As I’ve promised those readers who follow the series, below is Part One of a “deleted scene” from that falling out, from Blane’s point-of-view.

Blane liked having Kathleen living with him.  Having her close — to be there in the morning when he woke and waiting for him when he came home at night — soothed the part of his brain that always worried about her.  Since he’d rescued Kathleen from when she had been taken by human traffickers, she’d changed.  It didn’t escape Blane’s notice that she had become more withdrawn, more careful, than she used to be.  As though she didn’t fully trust that she was safe now.

She talked in her sleep, when she wasn’t having an outright nightmare.  Blane had woken to her screaming and drenched in a cold sweat, her entire body trembling.  It had gradually gotten a little better, enough to where Blane felt he could leave for a day or two at a time to campaign.  This morning he’d realized how wrong he’d been.

Kathleen asleep on his couch, a gun at her elbow, her eyes swollen from crying.

Kathleen was on his mind all morning as he worked.  Though he was campaigning a lot for governor, he still had work to do at the firm when he was in town.  Trying to keep up with both was exhausting, and the election was still months away.

Blane had resigned himself a long time ago to the kind of woman he’d likely marry.  She’d be cold, ambitious, as focused on his career as he was, be the perfect politician’s wife, have the requisite 2.3 kids, and would no more love him than he would her.

The thought made him uncomfortable.  Just because he was a cynical bastard didn’t mean Kathleen wasn’t everything she seemed.  She made him happy, and Blane should be glad that she and Kade got along.  Kade was his family, his brother who’d gone through way too much shit that Blane should have prevented.  And if sometimes it seemed that Kade felt more than a friendly affection for Kathleen, that didn’t mean he would do anything about it, or that she would let him.

Blane was ashamed of the things he sometimes thought when contemplating Kade and Kathleen, but neither could he ignore the twist of bitter cynicism inside his gut.  It would be easier after the wedding, he decided, when the dark shadow of doubt at the back of his mind could be put to rest.

The squawk of the intercom pulled Blane out of his thoughts as Clarice’s voice broke the quiet of his office.

“Your uncle is here to see you,” she said.

Blane’s brows shot up in surprise.  “Thanks, send him in.”

Senator Robert Keaston didn’t come to Indianapolis very often, by necessity he was most often in Washington, which meant he must be here because of something important.

The door opened and the Senator walked in.  Blane rose from his desk and crossed the office to grasp his great-uncle’s hand in a firm shake. He saw that Keaston carried a large manila envelope.

“Well, this is a pleasant surprise,” Blane said with a smile.  “I didn’t know you were in town.”
Keaston didn’t smile back.  “I’m afraid I didn’t have a choice,” he said, shaking Blane’s hand and following him back to the desk.  He sank into one of the two leather chairs that sat in front of it.

Blane returned to his chair, frowning as he observed his uncle across the expanse of mahogany.  “That sounds serious,” he said.

“I’m afraid I have some bad news,” Keaston continued.  The solemnity of his expression and sympathy in his eyes made Blane’s gut clench in a knot.

“What is it?” Blane asked, his tone carefully flat.

Keaston took a deep breath, as though to steel himself, and suddenly Blane didn’t want to hear what he was going to say.  It was as though a bolt of premonition shot through him, making him want to stop his uncle, the instinct of self-preservation kicking in hard.

“It’s about Kade,” Keaston said.  “And…Kathleen.  Your fiancée.”  Without another word, he handed Blane the envelope.

Blane’s eyes dropped to the package.  He didn’t want to open it.  Everything inside was screaming at him to slide that envelope right back across the desk to Keaston.  But Blane had never been one to run from anything, even if it might kill him.

Paper crinkling was the only sound in the room as Blane opened the envelope.  Tipping the contents, a sheaf of photographs slid into his hand.  Unheeded, the empty envelope slipped to the floor.

“I hope you’ll forgive me,” Keaston said, “but I had her followed.  I just wanted to protect you, Blane, and I am so, so sorry to have to give these to you.”

The words barely registered as Blane stared at images of Kathleen and Kade, captured in shades of color that seemed to burn into his retina.

Kathleen, wearing little more than nothing, standing inches from Kade.  His hands were on her hips as they gazed at each other.

This one they were even closer.  Kade’s hands had moved to the backs of her thighs, sliding up underneath the tiny leather miniskirt she wore.

Another photo.
Kade’s head was bent toward her as if about to kiss her, Kathleen’s lips were parted in anticipation.  His hands weren’t visible now, hidden by her skirt. The electricity between them seemed to leap off the page.

“Where were these taken?” Blane’s voice was nearly unrecognizable.

“A bar in Denver,” Keaston answered.  He’d gotten up and walked to the windows, his back to Blane as he spoke.  “They shared a motel room.  You were in D.C.”  Turning, he headed to the leather sofa against the far wall and dropped down into it.

Blane couldn’t lift his eyes from the photographs.  His brother.  The man Blane would do anything for, would have given his life for and nearly had several times — had betrayed him.  Betrayed him in the most personal, intimate way someone could.  Blane had trusted Kade, trusted him beyond all others, and this was how Kade repaid him?  By screwing his fiancée?
Blane’s hand trembled and he hurriedly dropped the photographs, his fist clenching tight.
“They’ve been carrying on for a while,” Keaston continued with a heavy sigh.  “I was hoping you’d see yourself and end things, but when you proposed, well, then I realized you needed to know the truth before things went any further between you and…this girl.”

Nothing had prepared Blane for the pain that knifed through him.  He’d been shot, stabbed, beat up, and all of it paled in comparison to the agony that now hit him in waves, each more powerful than the last, until he thought it would consume him utterly from the inside out.
Kathleen — the woman he loved, the woman he’d promised his life to — had lied to him.
A memory came to Blane, one he tried not to think of often, of when he’d checked on Kathleen after that harrowing night at Xtreme.  He’d silently pushed open her bedroom door — and seen her wrapped in Kade’s arms, both of them sound asleep.  Limbs entangled, her head on his chest, his face buried in her hair.  Blane had known then, on some level, but hadn’t wanted to acknowledge it.

God, he’d been so stupid.

“It’s still going on,” Keaston said.  Blane’s eyes jerked up to meet his uncle’s sad gaze.  “Last night, when you were out of town, Kade went by your house.”

Blane felt the blood leave his face.  They’d been together…last night?  In his own home?  Had they made love in his bed?

The image of Kathleen this morning, sleeping on the couch, eyes swollen from tears, came to him.  Had she been crying out of guilt and shame?  Had she and Kade thought this would go on, that Blane wouldn’t find out they were having an affair?  Or had they imagined he could, or would, ever forgive them?

Blane’s head dropped to his hands.  His eyes stung and he clenched them tightly closed.  It hurt to breathe, the hammering of his heart surprising him.  How could he not bleed from a pain that cut this deep?

There was a knock and then the office door swung open. 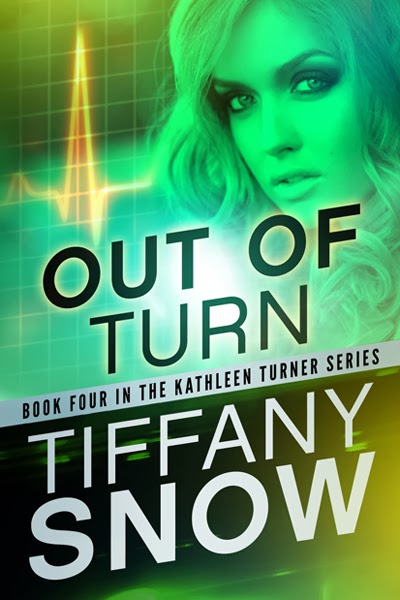 The sound of Kathleen’s cheery voice made Blane’s jaw clench in an effort not to groan in agony.  How dare she make a fool of him?  How dare she lie to him, tell him she loved him, then spread her legs for another man behind his back?  And not just any man…his brother.

Rage was beginning to burn away the pain and anguish.  Blane embraced his fury.  It was the only way he was going to be able to get through the next few minutes.  The next few minutes, when he would rip away the lies and cut Kathleen from his life.  She would regret the day she’d turned her back on him, the same as he regretted ever trusting her — a woman — with his heart.

Giveaway:
Tiffany will be giving away a digital copy of OUT OF TURN to one lucky person leaving a comment or email entry.

My debut novel, NO TURNING BACK, is the first book in The Kathleen Turner Series. I write about things I love to read myself - a heroine who could be a neighbor or best friend; two men who each portray their own version of darkness and light, each vying for her affection; and a story that focuses as much on the characters as it does the suspense. NO TURNING BACK, TURN TO ME, TURNING POINT and OUT OF TURN currently comprise The Kathleen Turner Series. The fifth and final book, POINT OF NO RETURN, will be released in May, 2014. A companion novel, TURN ON A DIME – BLANE’S TURN, is also available.

As for me, I've been reading romance novels since I was way too young to read such things, have an unhealthy obsession for all things Doctor Who, prefer Pepsi to Coke and Absolut to both, think men who drink girly cocktails are wusses, have learned to never stop believing in my beloved St. Louis Cardinals, and can recite the entire scripts of When Harry Met Sally and Apollo 13. George Washington is cool, Bon Jovi still rocks the house, and Bruce Willis is the ultimate alpha-male hero. Most of all, romance never, ever gets old.

Visit my website http://www.Tiffany-Snow.com for more information and special extras.


Giveaway ends 11:59pm EST Dec. 17th. Please supply your email in the post. You may use spaces or full text for security. (ex. jsmith at gmail dot com) If you do not wish to supply your email, or have trouble posting, please email maureen@JustRomanticSuspense.com with a subject title of JRS GIVEAWAY to be entered in the current giveaway.
a Rafflecopter giveaway
Posted by Maureen A. Miller at 12:30:00 AM