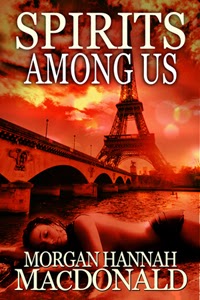 A serial killer loose in Paris, a woman threatened by a mad man and an ex-FBI agent with a haunting secret.

After she's blacklisted by the fashion industry in New York, Angela Henderson moves to Paris, France. Designing clothes is in her blood and she'll stop at nothing to realize her dream.

HE WILL FIND YOU

Cajun bad boy Jon-Luc Boudreaux is an ex-FBI profiler with a secret. He sees the souls of the recently departed. They can't communicate with him in words. Instead, they point to clues he must decipher on his own. That's how he's achieved the highest rate of solved cases in FBI history. A fact that did not win favor among his superiors or fellow colleagues. After years of enduring questions, rumors, and innuendo, Jon-Luc has left the FBI.

In an effort to determine his next course of action, Jon-Luc heads to Paris to visit an old friend. The moment he arrives, he's asked to assist with a case. It’s Fashion Week and the bodies of mutilated models are being discovered all over the city.

Now Jon-Luc is on the hunt for the most diabolical killer he's ever encountered and Angie's next on his list.

Excerpt from the latest Spine Tingling Thriller by  bestselling author Morgan Hannah MacDonald
SPIRITS AMONG US-Book 2 of THE SPIRITS TRILOGY
Jon-Luc Boudreaux stared at the woman standing before him. Some might call her beautiful, if you liked your women emaciated, which he did not. The naked woman's clavicles, ribs, and hip bones protruded. He preferred his women with curves. Her sleek, jet-black hair cascaded over her shoulder, hiding one breast.

He had to admit, her deep green eyes and high cheekbones were a lethal combination. This exotic looking creature had long gashes running down each arm. Blood oozed from the wounds dripping down her hands, landing on the floor.

The puddles spread wider as each drop splashed as if in slow motion. By Jon-Luc’s calculations, half her body’s blood had pooled at her feet. She stared at him, her expression grim. His eyes locked on hers as tears of blood began dripping down her cheeks.

Ruby lips parted as if to speak.

Her lips hadn’t moved with the words.

Jon-Luc blinked and the vision disappeared.

When his eyes focused, he found himself being manhandled by a distressed looking airline stewardess.

“Huh? What?” He blinked again, then remembered where he was.

“We are here, in Paris. The plane is disembarking. You go now, oui?” The moment his eyes met hers, the pretty blonde's face relaxed and she smiled.

Jon-Luc searched the cabin and noticed he was the only one left in first class. A few passengers still filed out the door of the plane.

“Oui, merci.” Jon-Luc stood, opened the overhead compartment, then grabbed his laptop and carry-on. The pretty blonde walked him to the door, still smiling. She had the greatest dimples.

“You will ring me for supper, oui?” Her cute little eyebrows raised.

“Oui.” Jon-Luc patted the pocket where he'd stashed her phone number, then glanced at her name tag. “Oui, Jeanette. I will definitely ring you.” With that he was out the door.

Author Bio:
Morgan Hannah MacDonald writes Romantic Thrillers that are NOT for the faint of heart. She has done many jobs leading up to her dream job of writing;  Photographer at Sears Portrait Studio,  Sales for Lancome cosmetics, Lead Singer in a few rock bands, Hair Stylist,  Tarot Reader,  Bank Teller (where her bank was taken over by two armed women!) just to name a few.  She was always  interested in writing,   but it wasn’t until she learned she'd dated a serial killer  that a true writer was born. She belongs to Romance Writers of America, the San Diego Chapter, as well as the Kiss of Death Chapter. She resides in San Diego, California where she is busy working on her next novel.  She can be found at www.morganhannahmacdonald.com. She loves to hear from readers. Write her at morganwrites@yahoo.com. LIKE her on Facebook for all upcoming announcements-http://www.facebook.com/#!/MorganHannahMacDonald.Author.
Posted by Maureen A. Miller at 12:30:00 AM