Congratulations to "Trish J." the winner in Loren's giveaway. Thank you to all who participated!

I’m Loren Mathis and I’m a new romantic suspense author. Swift Strike is the second novel in my SEAL Team 14 Series. Swift Strike largely takes place in Africa. The story kicks off with a terrorist takeover of an oil facility located in central Somalia, in which several workers are taken hostage. A daring rescue operation by SEAL Team 14 liberates the remaining hostages. The Team’s attention is later refocused on the terror group after additional attacks and the recapture of one of the rescued workers (Lena Westlake).

In addition to the suspense plot line, the key romantic plot thread involves Jesse Denison and Lena.  Lena is an oil petroleum engineer at her father’s oil production plant. Jesse Denison is a relatively new SEAL Team 14 member who becomes instantly intrigued with the shy and intelligent woman that he helped rescue. 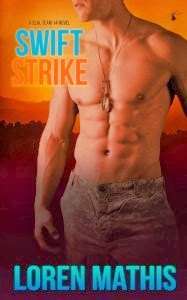 Ensign Jesse Denison and his comrades on SEAL Team 14 have a new assignment:  rescue a group of civilians who are being held hostage by a rogue terrorist cell in central Somalia.

After she is rescued by Jesse and his teammates, petroleum engineer Lena Westlake can’t get the handsome, brooding soldier out of her mind. Despite their intense attraction to each other, Lena doesn’t have a reason to believe that the two of them will meet again after their one night together.

NOTHING IS AS IT SEEMS

When Lena is re-captured by the same terrorist cell mere days after her first rescue, Jesse and the rest of SEAL Team 14 come to realize that this terrorist cell has a broader, deadlier agenda than just oil production disruption in Sub Saharan Africa. An agenda that includes the acquisition of a cutting edge weapons technology developed by Lena's father . . .

Excerpt:
“Lena! Lena, are you okay over there?”

The deep baritone of a man’s voice shouted out to Lena Westlake. She fluttered her eyes open and found herself lying flat on the ground. The back of her head rested in the dirt, her palms gripping the sodden earth below, and her mud-caked Nikes pointing toward the sky. A plume of ashen gray smoke drifted around her head.

This wasn’t right. This had to be just a weird dream. Albeit a very realistic dream, but a dream nonetheless. Lena shut her eyes and then quickly reopened them. Instead of finding herself ensconced in her comfortable bed in her hotel room in Mogadishu, she remained where she was. Lying in the dirt. Wisps of smoke still billowing around her head.
Okay, so she wasn’t dreaming after all.

She took in a reflexive breath before choking on the noxious fumes. Her eyes watered as she coughed out the smoke-laden air. For a moment, the only noises that Lena registered were the jarring sounds of her practically hacking out her lungs.

Taking her time, she rolled over onto her stomach, pushing herself up onto her hands and knees. For the first time, she tasted the blood.

The sharp, metallic taste of it filled her mouth. Wiping her dirt-streaked hands on her shorts, she brought them up to her face. Somehow she’d managed to cut her bottom lip on her teeth. Wincing slightly, she traced the uneven edges of the cut on the inside of her lip. It wasn’t long, only about an inch in length.

Her breathing came in wheezing spurts, as if she’d just finished running a forty-yard dash after smoking a pack of cigarettes. As she kneeled there on the ground, her arms felt as wobbly as if they were made of Jell-O. Clumps of dirt and mud clung to her clothes and hair. Jagged edges of tiny rocks and gravel pierced into her palms and legs. Moments passed by while she stayed frozen in that position, like a pilgrim kneeling prostrate before God. 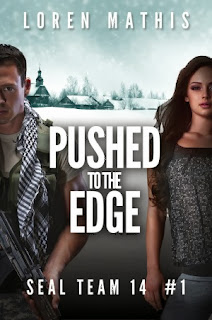 GIVEAWAY:
Comment for your chance to win a free e-book copy of the first book in my SEAL Team 14 Series, Pushed to the Edge!

For more information about my books, you can find me at:

Giveaway ends 11:59pm EST Dec. 10th. Please supply your email in the post. You may use spaces or full text for security. (ex. jsmith at gmail dot com) If you do not wish to supply your email, or have trouble posting, please email maureen@JustRomanticSuspense.com with a subject title of JRS GIVEAWAY to be entered in the current giveaway.
Posted by Maureen A. Miller at 12:30:00 AM