A Matter Of Trust

While watching a news account of the rescue of an abducted child, I became absorbed in the story. So much so, that I took that one event and built an entire plot around it. The person in the news story encountered a small child and her intuition told her something was wrong. Being a teacher, I have often encountered situations where that intuition kicked in to help a child. Often teachers have a sort of sixth sense where the well-being of students is concerned.

I took that grain of an idea and built it into the plot of A Matter of Trust. Jolie Wyngate is a teacher with a gift, or curse, depending on how she views it. She tries to keep knowledge of her ability undercover, but when the wellbeing of a child is at risk, she has to use her ability, regardless of the personal cost.

What would you do in a similar situation? If you had a special gift, but sharing that gift could cause you to lose the career you’d worked hard to establish, would you do it? Would you do the right thing regardless of personal costs?

I like to think that I would rise to the occasion. That my innate sense of always “do what is right, regardless,” would be strong enough to help me do what my conscious insisted I do.

That is exactly the dilemma Jolie faces in A Matter of Trust. She has learned through many personal setbacks that sharing her gift with others usually came with a steep price for her personally. Now she faces the ultimate challenge.

Mac Carlson is a man on a mission. Ex-Navy SEAL and security expert, Carlson’s mission is to save a kidnapped child. Jolie shows up on his radar as his major suspect. With serious trust issues on both sides, it seems unlikely that these two will be able to work together to save the kidnapped child, let alone develop a serious relationship.

Add to that the presence of the Maniac, the disembodied voice that is the source of much of Jolie’s information and the plot becomes very complicated. A Matter of Trust, by MJ Flournoy, available now.

Excerpt:
A Coke, a fat one, or an orange soda.
"Not gonna happen." Jolie Wyngate shrugged, climbed from her car and hurried toward the convenience store to pick up a quick snack before continuing on her way south.
And why not?
"Because I have to drive another hundred and fifty miles, and I don't intend to stop every half hour for potty breaks."
You are so not any fun! It's just a Coke, for Pete's sake.
"And you, lady, are so predictable."
Make it chocolate then.
Jolie smiled. Chocolate, a compromise with which she could live. "Right."
And stop speaking out loud, people will think you're crazy.
"Me crazy? Get real, Maniac, I've talked to you since childhood. If I haven't landed in the
loony bin by now, I hardly think it's going to happen."
Humor me, then.
Jolie shrugged, continuing toward the store. She'd pick out a chocolate bar to keep her unseen companion happy.
Serve you right if I quit talking to you all together.
"Put it in writing." Jolie reached for the door handle.
A giggle erupted within Jolie's mind. Then, in the tone Jolie hated hearing: Shush, pay
attention. There's something wrong in there.
Oh, hell. Jolie bit the soft flesh of her lower lip. Her hand tingled as if the door was
electrified. Shit, this was the real reason for the Maniac's sudden thirst.
The cool, dry air of the convenience store surrounded her when she stepped through the open door. For a second, the young clerk behind the counter looked up from the newspaper spread in front of her. Nothing. Jolie expelled a breath of relief, exchanged a quick smile with the clerk, and then headed toward the candy isle.
Then she saw her. The little girl wandered listlessly down the candy isle, her small hand
trailing over the rows of candy, gently touching, but taking nothing. Jolie watched her for a moment, then scanned the store and saw no one in sight.
The child turned, her gaze lifting until it found Jolie. She tilted her head to the side, her eyes searching Jolie's for an instant. Then she moved closer and stared up at her. The expression on the small face caused Jolie's heart to turn over. She knelt to the child's level and touched the riot of red curls. A jolt of emotion skittered along Jolie's spine, but Jolie forced herself not to pull away.
"Hey, sweetie, does your mommy know you're out here alone?"
The little girl looked about three. She continued to stare mutely. Jolie smiled at her. "That your mommy behind the counter?"
She lifted the child into her arms. Unprepared for the sudden shock of pain and despair that engulfed her, Jolie almost dropped her. Instead, she tightened her arms instinctively around the frail body.
Something's not right. 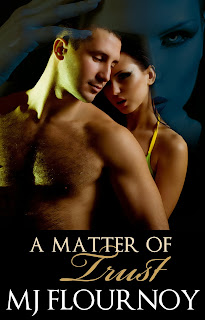 A MATTER OF TRUST

Her paranormal abilities had always caused her grief. But can they save the life of a child who has been spirited away fro her parents and the life of the man she loves?

Jolie Wyngate is a middle school teacher with an extraordinary gift—or is it a curse? Throughout her life, she's been never been sure. Now, when she is implicated in the disappearance of a child, the ultimate value of her powers will be put to the test.

Mac Carlson, former Navy SEAL and security expert, is tasked with rescuing the girl, Rachael Anne. From the moment he meets Jolie, his suspicious and protective nature sets its sights on her as a prime suspect. Can Jolie clear her name and gain this man's hard-won trust?

More importantly, can she save the girl before time runs out? She won't be able to do it without her psychic abilities—but Mac has a hard enough time trusting Jolie as it is, let alone trusting her powers to lead them to Rachael Anne.

As Mac and Jolie realize they have no choice but to work as a team—and as they slowly warm to each other in the process—they realize they have a new problem: the man they are after has set his sights on Jolie. Now Jolie will need all of her abilities, and all of Mac's strength and skill, to stay out of the fiend's hands and bring Rachael Anne back home.

Bio for MJ Flournoy:
MJ Flournoy loves crafting stories of romance and suspense. Her interest in writing grew organically from her love of reading. A late bloomer, MJ attended college as a non-traditional student and earned a degree in history with an eye toward writing historical romance.

After graduation from college, MJ became a middle school teacher, which helps to keep her grounded in the real world while her plots take her away to the extraordinary worlds of imagination and creativity. MJ enjoys adding a twist of paranormal to her plots.
MJ makes her home in rural Georgia with her husband. She has two children and two grandchildren. Her favourite activities are writing, reading, and travel.

Giveaway ends 11:59pm EST Dec. 4th. Please supply your email in the post. You may use spaces or full text for security. (ex. jsmith at gmail dot com) If you do not wish to supply your email, or have trouble posting, please email maureen@JustRomanticSuspense.com with a subject title of JRS GIVEAWAY to be entered in the current giveaway.
Posted by Maureen A. Miller at 12:30:00 AM