Congratulations to "Tammy Y" and "Janet K", the winners of Lena's giveaway. Thank you to all who participated!

My May 2013 Harlequin Intrigue book, Explosive Attraction, featured a sexy bomb squad technician, Rafe Morgan. He had an equally sexy brother, Nick, who was an undercover DEA agent. Readers loved Nick and emailed me asking if he would ever get his own book. The answer is a resounding yes!

Undercover Twin releases on November 19th and features Nick Morgan doing what he does best, going undercover to foil the plans of drug dealers. But this time, the stakes are even higher than usual. In addition to stopping a dangerous drug lord, he has to rescue a kidnapped woman, while working with his ex-girlfriend, the kidnapped woman’s identical twin sister. 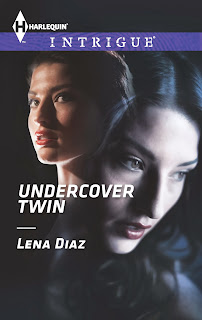 This book was so much fun to write, because it takes the identical twin trope to the extreme,
facing off two sisters who are polar opposites in every way. Heather, our heroine, is a go-getter, private investigator who dresses conservatively and wouldn’t dream of breaking a speed limit. Her sister, Lily, has been in trouble with the law since she was a teenager, dresses provocatively, and is covered in tattoos. To go undercover pretending to be her twin so she can save her, Heather has to get tattooed and learn how to walk in stilettos without falling flat on her face in front of a bar full of lethal ex-cons in Key West.

The book has some funny moments, especially with sexy, alpha-Nick trying to help Heather dress and act like her sister, but it has some poignant moments too. There is a lot of dark history between these sisters, and it isn’t until Heather goes undercover that she begins to learn exactly how much her twin has suffered during her lifetime and why she made the choices she’s made. It’s a story of redemption and forgiveness all around, with plenty of car chases, flying bullets and explosions to keep your blood pumping. I adore Nick and hope you enjoy watching him fall in love, against incredible odds, just as much as I did.

Here's an excerpt, where Heather is trying to help her sister, Lily, but gets caught in the middle of a DEA raid:

The look of shock on Nick’s face was quickly replaced with anger. His brows were drawn down and his jaw was so tight his lips went white. He looked mad enough to strangle her, but at least he wasn’t pointing his gun at her, like the others. He held his gun down by his side, aimed at the floor.

He was probably furious that she was in the middle of this, and she couldn’t blame him for that. She should have taken his advice. She should have tried to convince Lily to go into an alcohol treatment program. Then maybe Lily wouldn’t have gotten mixed up with whatever she’d gotten herself into now. Heather had naively insisted she could help her sister on her own, without taking such a seemingly drastic step. But obviously Nick had been right.

Nick holstered his gun and strode toward her.

Heather was so relieved she almost slumped to the dirty floor. “Nick, I’m so glad you’re here. Lily is scared. She’s not—”

Nick roughly grabbed her arms and spun her around, shocking Heather into silence. He pulled her hands behind her back. She gasped at the feel of cold steel clamping around her wrists. A ratcheting sound echoed in the room, and he pushed her toward the door.

“What are you doing?” she cried out.

“Heather Bannon, you’re under arrest.” His voice was clipped, cold.

“What? Wait, what are you talking about?”

He paused beside the last sink and leaned down, pressing his lips next to her ear. “You’ve got cocaine in your hair, darlin’,” he growled.

Heather’s gaze shot to the mirror. A wild-eyed woman stared back at her, a cloud of white dusting her normally dark brown hair, making it look prematurely gray.

Her horrified gaze met Nick’s in the mirror. “I can explain.”

“Tell it to the judge.” He grabbed her arms and marched her out the door.

Lena is currently writing the next installment of the Nursery Rhyme series to add to earlier books He Kills Me, He Kills Me Not, Simon Says Die, and her September 2013 release, Ashes, Ashes, They All Fall Dead.

You can order Undercover Twin here:
Amazon:
Barnes and Noble:
Other retailers via the Harlequin site:


Giveaway ends 11:59pm EST Nov. 19th. Please supply your email in the post. You may use spaces or full text for security. (ex. jsmith at gmail dot com) If you do not wish to supply your email, or have trouble posting, please email maureen@JustRomanticSuspense.com with a subject title of JRS GIVEAWAY to be entered in the current giveaway.
Posted by Maureen A. Miller at 12:30:00 AM