Congratulations to "Donna", the winner of Terry's giveaway. Thank you to all who participated! 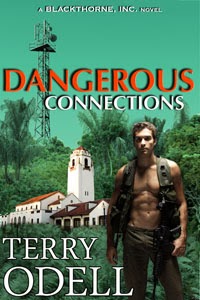 When I decided to write Dangerous Connections, the fifth book in my Blackthorne, Inc. romantic suspense series, I wanted something new. The first four books featured field agents, and I pulled them away from their normal covert ops missions to see how they dealt with living in the "civilized" world. But Jinx, Blackthorne's intelligence gatherer, demanded his book. Since he had no covert ops field agent training, I wondered what it would be like to flip the approach and put him, a computer nerd, into the field where he didn't have access to cyberspace.

I was writing what my daughter calls the "MacGyver Opening Gambit" for the beginning of the new book—most of my Blackthorne, Inc. books start by showing the team in action—when I needed some information about where the cartels operated in Mexico. When I found an article about how the cartels were kidnapping American engineers to build private cell phone networks, I knew I'd found my story.

Jinx blames himself for faulty intel that led to the loss of a hostage the team was sent to rescue. Not only that, most of the team was captured as well. Someone has to find them, and Jinx is the one with the technological skills. All he has to do is go to Mexico, get kidnapped, work his way into the cartel's computer and cell phone system, find the hostage and the team. Oh, and while he's there, he should make some clever modifications to the cartel's phone system so the authorities in Mexico can eavesdrop. Piece of cake. For a field operative. Not a geek.

Of course, Jinx's interactions with people tend to be from behind a computer, where he spends his free time in role-playing games. Translating those skills to dealing with real people—with real guns, and no do-overs—is another thing entirely. Keeping him outside his comfort zone was fun—for me, not Jinx, I'm afraid.

“Shouldn’t be much different from role-playing computer games,” Zeke had said.

Only this time, it was face to face, not behind the security of a computer. The lives that might be lost were real, and there were no do-overs. No replays. Hours of briefings at the compound were one thing. Having to create and maintain his cover among strangers was another thing entirely. His stomach was doing the rumba, not listening to his brain.

Role playing. You can do it.

*******
And, because I'm not a completely nasty author when it comes to my characters, I did find a more experienced ally for Jinx. He meets Elle, a cop, who's looking for her missing sister, so at least he's got someone with him who knows which end of a gun goes where.  Here's a peek at when she showed up in his hotel room, pointing a gun at him, to ask for his help:

Who the hell was she? Had Blackthorne sent her to help? If so, she would have mentioned it, wouldn’t she?

The gun was gone, he noticed. Probably in the large blue-flowered purse sitting on the floor beside the small loveseat, also rattan, with a floral print to match the chairs. All very tropical. He stepped to the sliders and opened the drapes. She didn’t stop him. Not that there was anywhere to go other than the small balcony. He sure as hell wasn’t jumping ten stories. This room overlooked the ocean, not the pool—not that he’d have jumped into the pool from here. He hesitated before opening the slider. “You think someone else has a gun and wants to shoot me?”

“No, and I don’t want to shoot you. I wanted to make sure you’d listen.”

“I’m listening.” He stared at the surf, the sunlight reflecting off the water like so many diamonds.

A deep intake of breath. “We have a mutual interest.”

For more about Dangerous Connections, including a first-chapter read, click here.

One commenter will win a download of ANY of Terry's Blackthorne, Inc. books. Please leave the book you'd like to win in your comment, and the format (Kindle, Nook, Kobo, Apple, Smashwords).

About the Author:
Terry Odell began writing by mistake, when her son mentioned a television show and she thought she’d be a good mom and watch it so they’d have common ground for discussions.
Little did she know she would enter the world of writing, first via fanfiction, then through Internet groups, and finally with groups with real, live partners. Her first publications were short stories, but she found more freedom in longer works and began what she thought was a mystery. Her daughters told her it was a romance so she began learning more about the genre and craft. She belongs to both the Romance Writers of America and Mystery Writers of America.
Now a multi-published, award winning author, Terry resides with her husband in the mountains of Colorado. You can find her online at:


Giveaway ends 11:59pm EST Nov. 17th. Please supply your email in the post. You may use spaces or full text for security. (ex. jsmith at gmail dot com) If you do not wish to supply your email, or have trouble posting, please email maureen@JustRomanticSuspense.com with a subject title of JRS GIVEAWAY to be entered in the current giveaway.
Posted by Maureen A. Miller at 12:30:00 AM