Congratulations to "Valri" and "Jo-Anne" the winners in Angi's giveaway. Thank you to all who participated!

Man and dog go together. Devotion, loyalty, love. A dog has an uncanny ability to feel what we feel. So it is with two dogs from two books. This time, instead of introducing hero and heroines, or plots, you get to meet two amazing canines who will give you some special insights into the humans they came to know…and love.

My human named me Trouble. Poor man. He’s the one in trouble. For some reason he decided to walk across the country. Something about wide-open spaces and no walls. I have to admit, my human—Daniel Adams is his name—is a good one. He found me on the side of road. I was walking along, minding my own business, when some idiot in a pickup swerved and hit me.

Daniel didn’t ignore me like so many others. He rigged up a contraption and dragged me miles and miles, even though he limped half the way. He found me a doctor and didn’t leave me. It had been a long time since no one left.

I needed him that day, but he needs me, too. His soul hurts. I see it in his eyes. Sometimes he shouts in his sleep. Sometimes he cries, but he doesn’t tell anyone. Only me. He talks to me. Tells me about being locked up, about being afraid. And I listen. Maybe that’s why we found each other. I was hurt on the outside, Daniel on the inside. But he’ll get better. He has me. And I won’t leave him. Ever. Because he didn’t leave me. 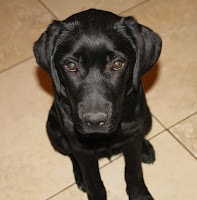 Across the room, Dallas circled as if she was about to curl up and sleep. “I should probably walk you before you settle down.” The pup squatted instead. Too late again. He was finished being a step behind. Time to act like who he was. A Marine.

I admit, that passage above isn't my best moment in the book, but Angi thought it was funny. In my defense, I'd been holding it a long, long time and had been very patient with Jake, my new human. My name's Dallas, after the city where I was born. I was happy to be adopted, being blind in one eye made it real hard until Bree came along. I liked living with Brenda Ellen, but something happened to her. Then I met Jake, he took me in, and just…needed me. A lot.

Like Trouble's story, my human found me when I was desperate. I was half-frozen and didn't know what to do. And like Trouble's human, Jake Craig needed me big time. He talks about war and three tours somewhere. I don't know exactly what that means, but it can't be good 'cause he gets all tense and withdrawn. His hands even shake. But I stick my head under it for a good scratch and he settles down. He's really good rubbing behind my ears. I don't think he knows how much loving it took to break through all his defenses. But I did.
~ ~ ~ 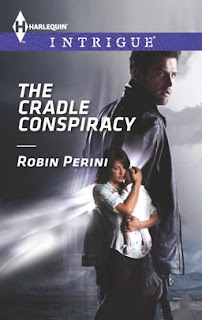 IN ROBIN PERINI'S THE CRADLE CONSPIRACY, TWO THINGS HAVE BEEN STOLEN FROM RAVEN: HER MEMORIES…AND HER BABY

CIA agent Daniel Adams, once a prisoner of war, is a loner out of necessity. But rescuing an amnesiac woman left buried alive bonds them in ways neither can resist. All "Raven" knows is that her baby is in danger. All Daniel can focus on is finding the missing child—and protecting Raven every step of the way.

Her memories are lost and his are scarred from the damages of war. But as they depend on each other for survival in the rugged west Texas mountains, the pieces of their broken pasts start to come together. Now all they have is the risky hope of a future together as they confront the threat that can destroy them both.

“Perini’s tale is a twisted trip into the lives of two scarred souls who are digging into the mind of a psychopath to survive…[It’s]…a suspenseful adventure that will keep readers guessing until the end.” ~Romantic Times, 4-1/2 Stars
~ ~ ~ 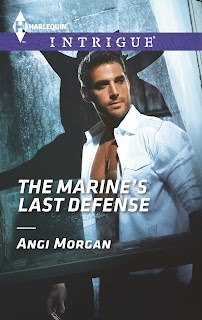 TO THE REST OF THE WORLD, SABRINA WATKINS DOESN'T EXIST. BUT TO THIS COP, SHE IS VERY MUCH ALIVE IN ANGI MORGAN'S THE MARINE'S LAST DEFENSE.

"Former Marine Jake Craig is now a homicide detective who keeps people at a distance, but there's something about the pretty woman at the local coffee
shop that captures his attention. Sabrina Watkins has built a successful business walking dogs, but she's also on the run from men who want her to take the fall for their illegal activities-after she's dead. How can she get involved with a taciturn cop who could slap the cuffs any minute? Before he knows it, Jake is busy trying to keep Sabrina alive as he worries that he's falling hard for a felon. Morgan launches the volley from the first pages so readers aren't left wondering whodunit, but they'll have to pay attention to the escalating action to keep up with the characters, who are in trouble from the get-go." ~Romantic Times Magazine, 4 STARS
~ ~ ~
ANGI MORGAN writes “Intrigues where honor and danger collide with love.” She combines actual Texas settings with characters who are in realistic and dangerous situations. Angi's work has been a finalist in the Bookseller’s Best Award, Romantic Times Best First Series, Gayle Wilson Award of Excellence and the Daphne du Maurier.
Website   Facebook   FB Fan Page   Twitter @AngiMorganAuthr
A Picture A Day   Goodreads   Pintrest  Book Trailers on YouTube
~ ~ ~
ROBIN PERINI is a RITA Finalist, award-winning and national bestselling author, devoted to giving her readers fast-paced, high-stakes adventure with a love story sure to melt their hearts. Her mission's motto: "When danger and romance collide, no heart is safe." After seven prestigious Romance Writers of America® Golden Heart® finals, Robin has since sold fourteen novels.
Website   FB Fan Page   Twitter @RobinPerini
Goodreads   Pintrest  Book Trailers on YouTube
~ ~ ~
ENTER ANGI & ROBIN'S 'THANKS FANS contest': register at Rafflecopter through November 30th for a copy of THE CRADLE CONSPIRACY & THE MARINE'S LAST DEFENSE. Speaking of giveaways…WE EACH HAVE A BOOK TODAY for a Blog Commenter. LEAVE A BLOG COMMENT to be entered.

DO YOU HAVE ANY CRAZY PET STORIES YOU'LL SHARE?

Giveaway ends 11:59pm EST November 15th. Please supply your email in the post. You may use spaces or full text for security. (ex. jsmith at gmail dot com) If you do not wish to supply your email, or have trouble posting, please email maureen@justromanticsuspense.com with a subject title of JRS GIVEAWAY to be entered in the current giveaway.