Why Jane Eyre is the Mother of All Romance Novels

Congratulations to "Taurus", the winner of Joanna's giveaway. Thank you to all who participated!

"Jane Austen is the greatest artist that has ever written." – George Henry Lewis, writing for Frazer's Magazine.

Ah, the sting. How sharp the pain! More than a century later, we can still imagine how Charlotte Brontë felt when she opened her copy of Frazer's Magazine and read what Lewis wrote. Every author can relate, because we can conjure up similar hurts.

Did Charlotte Brontë retire to her fainting couch and weep silently? Did she email her friends and gnash her teeth? Did she start a secret Facebook page where friends could list similar insults? No, she did not! Instead, she struck back, facing down the critic himself with this waspish retort, "Why do you like Miss Austen so very much?...(P)assions are perfectly unknown to her."

And that, to Brontë, was the point that Lewis overlooked. You can't have romance without passion. Sorry, buddy. No can do.

No passion, no way. Austen thinks when she should feel. For a real book read Jane Eyre. @charlottebronte #romancerules! Pls retweet

Unlike the elegantly restrained characters created by Austen, Brontë's dramatic personae throw temper tantrums. They hurt each other. They seethe with anger. They squirm and stammer with emotion. You want heaving bosoms? You've got them. Jane Eyre is a story as juicy and rich as an overripe summer peach.

Jane is no milksop even though she calls herself "poor, obscure, plain and little." Early on, we are introduced to her temper. At age eight, she refuses to back down after her cousin smacks her up the side of the head with a book. She leaves the luxury of the Reed household for a charity institution, telling her aunt, “I am not your dear; send me to school soon…for I hate to live here.” It is this vibrant quality, this spark of spirit, that ignites Edward Rochester's love for the drab governess. 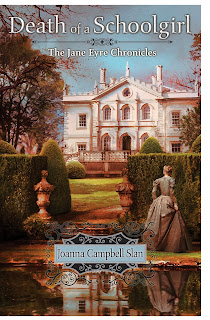 In Jane Eyre we are introduced to real people, warts and all. Jane describes Edward's looks thusly: "Colourless, olive face, square, massive brow, broad and jetty eyebrows, deep eyes, strong features, firm, grim mouth…not beautiful, according to rule." Fasten your seatbelts, darlings, because this is a messy sort of love, a passion that reverberates today. And Brontë knew exactly what she was about. She set forth her rules of engagement: "When authors write best, or at least, when they wrote most fluently, an influence seems to waken in them which becomes their master, which will have its own way…"

On Thursday, October 16, Jane Eyre will mark its 166th anniversary of publication. Let's raise a glass to the triumph of passion over reason. A toast to the mother of all romance novels! And if our drinking leads to a roll in the hay, I think Brontë would have approved!

Giveaway:
To help you in the mood, I'm giving away one copy of Death of a Schoolgirl, my continuation of the love story between Jane and Edward Rochester. I'm keeping the bottle of champagne for myself.

About the author:
Award-winning and National Bestselling author Joanna Campbell Slan is the creator of three mystery series. The first book in her historical romance mystery series featuring Jane Eyre is Death of a Schoolgirl, winner of the 2013 Daphne du Maurier Award for Literary Excellence. Slan's long running Kiki Lowenstein Mysteries was an Agatha Award Finalist. Its most recent title is Group, Photo, Grave (Book #8). A new series by Slan will debut this November with Tear Down and Die, starring Cara Mia Delgatto, young woman who runs a recycling/repurposing shop on the Treasure Coast of Florida.

In her past life, Slan was a television talk show host, an adjunct professor of public relations, a sought-after motivational speaker, and a corporate speechwriter. Visit her website at www.JoannaSlan.com See all her books at http://tinyurl.com/JoannaSlan Follow her on Pinterest (www.Pinterest.com/JoannaSlan) Join the conversation at http://tinyurl.com/JCSlan Or communicate directly with her at JCSlan@JoannaSlan.com

Giveaway ends 11:59pm EST October 16th. Please supply your email in the post. You may use spaces or full text for security. (ex. jsmith at gmail dot com) If you do not wish to supply your email, or have trouble posting, please email maureen@justromanticsuspense.com with a subject title of JRS GIVEAWAY to be entered in the current giveaway.