Congratulations to Janet B., Brooke and Maureen C., the winners in Cate's giveaway. Thank you to all who participated!

Cate Beauman’s newest release is available now through Amazon and Barnes and Noble.  Visit www.catebeauman.com for more information and to read excerpts from her best selling series The Bodyguards of L.A. County.

When the past and present collide… 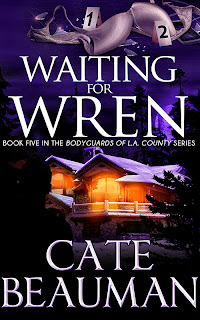 Wren Cooke has everything she’s ever wanted—a thriving career as one of LA’s top interior designers and a home she loves. Business trips, mockups, and her demanding clientele keep her busy, almost too busy to notice Ethan Cooke Security’s gorgeous Close Protection Agent, Tucker Campbell.

Jaded by love and relationships in general, Wren wants nothing to do with the hazel-eyed stunner and his heart-stopping grins, but Tucker is always in her way. When Wren suddenly finds herself bombarded by a mysterious man’s unwanted affections, she’s forced to turn to Tucker for help.

As Wren’s case turns from disturbing to deadly, Tucker whisks her away to his mountain home in Utah. Haunted by memories and long-ago tragedies, Tucker soon realizes his past and Wren’s present are colliding. With a killer on the loose and time running out, Tucker must discover a madman’s motives before Wren becomes his next victim.

The Unofficial Waiting For Wren Soundtrack

As I have discussed with previous book launches, music plays a huge part in my writing process. I typically listen to Pandora or YouTube and compile a collection of songs that I feel represent my characters or the situations they face as the novel unfolds.  Here are a few of the songs that I had on “repeat” while I created Tucker and Wren’s story!

The soundtrack, of sorts, for Waiting For Wren:

• Gone, Gone, Gone by Phillip Phillips
• Lego House by Ed Sheeran
• Wanted by Hunter Hayes
• What Would Happen If We Kissed by Meredith Brooks
• Trying Not to Love You by Nickelback
• Beneath Your Beautiful by Labrinth Ft. Emeli Sande
• I Hate How Much I Love You by Rhianna Ft. NeYo
• Be Still by The Fray
• All Along by Remedy Drive
• Clarity by Zedd
• Mirrors by Justin Timberlake
• To Build A Home by Cinematic Orchestra

Read an excerpt from Waiting For Wren:

She pulled in her drive, dropped her phone, and gripped the wheel with trembling hands as heat from the vents rushed over her. She stared at her darkened front steps in the shadows cast about from the neighbors’ tall trees. What if he was here? His texts weren’t threatening, and technically neither were the flowers, but Rex wasn’t healthy. In the two years she’d owned her home, she’d never been terrified to get out of her car and go inside like she was now.
This is what he wants. He wants you to be afraid while he plays his games. Steeling herself, she grabbed her phone and got out with her key fob clutched in her unsteady hand. The cool rush of wind tossed her hair in her face, and she swiped wavy locks behind her ear as she strained to hear over the rustling leaves. She walked quickly, her eyes darting everywhere.

She just had to get to the door and step inside. The panic button was in the entryway if she needed it. The police would come help her, along with whoever was fielding calls at Ethan’s company tonight. “I’m almost there. I’m almost there,” she whispered, flinching, blinking, startled as the sensor lights flashed on to brighten the walkway. The security lights. It was just the security lights. She forgot she reactivated the feature the night of the gala. She took another step forward and saw the blood by the pretty pot of red mums. “Oh my god. Oh my god.” A black cat lay on her step, decapitated and bloated in a pool of dark, congealed crimson. “Oh my…”

Her breath rushed in and out as she stumbled back. The cellphone in her clammy hand rang, and she screamed. Blindly, she pressed “talk.” “Hell—hello?”

She whirled, scanning, searching for Rex. He was here, somewhere. He had to be.

“Stop,” she shuddered out as she hurried to her car, looking over her shoulder from time to time, sure he was waiting to pounce. “Stop doing this. I’m calling the police.”

“Leave me alone!” She hung up, gasping for air. Tears poured down her cheeks, and her hand shook as she opened her door, took her seat, and locked herself in. She had to get out of here. She had to get away. It took her two tries to shove the key in the ignition as she glanced at the bloodstained step once more and backed out with a squeal of tires. She sped off, heading toward Ethan’s until she remembered he was gone and a quarter of his house had been gutted for the new edition. All of them were gone—Ethan, Hunter, and Austin. She pressed ‘one’ on her speed dial, listening to the repetitive ringing. Ethan’s smooth voice told her to leave a message, but she hung up instead. She turned down another street, taking her farther from her home, and punched in Ethan Cooke Security’s twenty-four hour assistance line.

Did you enjoy the excerpt?  You can read the first three chapters on my website, www.catebeauman.com.

Cate currently lives in Tennessee with her husband, their two boys, and St. Bernard, Bear. She is the author of the best selling romantic suspense series, The Bodyguards of L.A. County.  Before her career as an author, Cate worked in special education for 12 years.

“I’m a pretty lucky girl; one day I woke up and my entire life changed. I saw the light, so to speak, and decided I was going to be a writer. Now, two years later, I’m working on my sixth novel and I’m an Amazon best selling author.  I’m very grateful for the support and success I have had.  - Cate “

Giveaway:
Cate will be giving away 3 digital copies of WAITING FOR WREN to 3 people leaving comments or an email entry.

Giveaway ends 11:59pm EST Oct. 24th. Please supply your email in the post. You may use spaces or full text for security. (ex. jsmith at gmail dot com) If you do not wish to supply your email, or have trouble posting, please email maureen@JustRomanticSuspense.com with a subject title of JRS GIVEAWAY to be entered in the current giveaway.