Love and Scandal: The Series Begins

Congratulations to "Debra S." the winner of Rachel's giveaway. Thank you to all who participated!

Confession: I’m a political junkie. And I’m especially a political junkie when it comes to elections and campaigns. I realize with everything happening in Washington these days, politicians are not a popular topic. (Understatement of the year). But don’t let that deter you from checking out my new release Race to Kill—book one in the Love and Scandal series.

While this book is about a presidential election, it’s distinctly non-partisan. Here’s what it does have to offer.

• An incredibly hot hero—Delta Force Operator turned FBI agent Marcus Locke. Think: tall, dark, and handsome with amazing abs. Just check out the cover and you’ll see what I mean!
• A really smart and interesting heroine—Vivian Reese steps into the role as campaign spokesperson and takes on the job with authority and confidence.
• A hot Navy SEAL ex-boyfriend who has his own secrets.
• The first female President!
• And last but not least, an adorable calico cat. 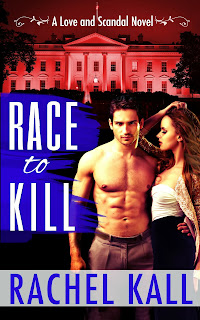 When I began writing Race to Kill, I didn’t go into it with a series in mind. But once I started developing the characters it became clear to me that I wanted to write their stories too. Love and Scandal is a series set in Washington, DC that involves not only politicians but those working in various branches of the government and the media. And of course military heroes—some currently in the military and some who have taken that experience and moved onto different careers.

So I hope you’ll check out Race to Kill and enjoy reading Viv and Marc’s love story as much as I enjoyed writing it.

When fiercely independent Vivian Reese is thrust onto the national stage during a heated presidential campaign, she doesn’t expect to become a media darling. She also doesn’t expect to start to fall for her sexy new bodyguard, Marcus Locke. But when threats start surfacing against the sitting President’s campaign and all evidence points to Vivian, she doesn’t know who to trust.

Delta Force Operator turned FBI agent Marcus Locke is supposed to be investigating campaign finance crimes. He’s not supposed to be checking out the sexy, eloquent campaign spokeswoman Vivian Reese, who’s one of his prime suspects! But when they are caught in the middle of a presidential race that is quickly turning deadly, he is forced to put both his heart and his job in the line of fire.

Tempers flare and passions ignite as the campaign gets dangerous, but when bullets start to fly will either of them survive?

Giveaway:
I’m giving away 1 ecopy of Race to Kill and a $10 Amazon e-giftcard to one lucky commenter.

About the author:
Rachel Kall writes romantic suspense. She enjoys writing spicy and suspenseful stories to keep readers guessing. Rachel also loves to read every day while doing cardio. Her favorite genres are romantic suspense and contemporary romance, but she’s always open to an amazing story in any genre. Rachel is a member of Romance Writers of America, KOD, and Georgia Romance Writers. She loves animals and is active in animal rescue. She enjoys adding loveable pets to her stories. She lives in Georgia with her husband and five furkids—two dogs and three cats.

Giveaway ends 11:59pm EST Oct. 22nd. Please supply your email in the post. You may use spaces or full text for security. (ex. jsmith at gmail dot com) If you do not wish to supply your email, or have trouble posting, please email maureen@JustRomanticSuspense.com with a subject title of JRS GIVEAWAY to be entered in the current giveaway.
Posted by Maureen A. Miller at 12:30:00 AM