I judged a story by its cover … and was wrong.

Congratulations to "Debbie C." the winner of Dianna's giveaway. Thank you to all who participated!

We’ve all done it at some point – made a rash judgment based on cover or image alone.

I’m not talking about judging people without getting to know them, but other things--like a book, movie or product.

Back when we had video rental places like Blockbuster in our town, my husband and I would stop by once a week and walk the aisles, trying to decide what would be a good movie for that night.  We made our decisions based on covers and pitch lines about the stories.

There was one movie I refused to watch for six months.

We took turns choosing, and he kept pointing out Lars and The Real Girl, because he likes funny movies—the  Will Ferrell, Adam Sandler and Jack Black type.  I have to really be in the mood for a goofy film, so every time he’d suggest that movie, I’d shake my head and mutter, “Not enough popcorn in the universe for me to watch that tonight.”

I’d even looked up the movie online.  The blurb said it was about a relationship between a sweet guy and an anatomically correct sex doll.  Take a look at that DVD cover.  Doesn’t it scream frat house movie?

I knew I could pass on it for only so long and finally gave in.  We watched Lars and The Real Girl.  The whole thing.  I even forgot to make popcorn.

I expected to just get through it and be meh about it, but instead I was ticked off. Very, very angry.

Why?  The movie promo/marketing department totally missed their target audience.
I know a lot of people who would’ve loved that movie, but not one of them had seen it at the theater. In fact, I couldn’t find any of my movie friends who’d even seen it on DVD until I told them about it. The screenplay is brilliant and the acting was terrific.

Once I’d finished watching it, I had to go seriously research this movie.  It was nominated for an Academy Award for best writing (screenplay) and was written by Nancy Oliver.   She could have written a default story (goofy, slapstick humor with stereotypical jokes), but  instead she created a story with so much depth that it was funny, sad and heartwarming all at the same time.  She deserves a standing ovation for the writing.

How does a high concept idea like that go unnoticed by so many?

Because we never got past the cover.  If you’ve never seen this movie, you should. 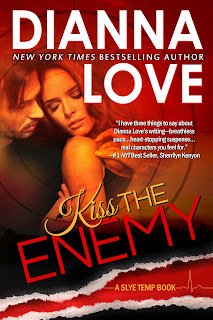 Just like with movies, I think book covers make a big difference in telling readers what a book is about. That’s why I changed covers on an entire series after three of the books had  already been released.   I ran beta tests with readers--those who loved my new Slye Temp romantic suspense series and those unfamiliar with it-- that confirmed something I had suspected.   My original covers did not represent the stories.

They were beautiful covers for mainstream thrillers, but they didn’t send the message “sexy romantic suspense.”  My long-time readers were willing to read this series regardless of the original covers because they know I’ll beat my brains out to give them the best story I can and that there will be a big romance at the heart of it, but new readers unfamiliar with me didn’t “see” the genre they were interested in with those original covers.

For that reason, I have recently had all the covers on my Slye Temp series redesigned.  The  same amazing artist, Kim Killion, did both versions.  Kiss The Enemy is book four in the Slye Temp series and available for Ebook download or as a print book on October 21, 2013.

I really appreciate my readers and street team, who gave me feedback on the original cover designs.  Thanks to them, I have new covers I just love.

GIVEAWAY:
I’m giving away a print copy of Honeymoon To Die For and a loaded Keeper Kase®!   Leave a comment and tell me – have you ever been pleasantly surprised by misjudging something by its cover?

Giveaway ends 11:59pm EST Oct. 9th. Please supply your email in the post. You may use spaces or full text for security. (ex. jsmith at gmail dot com) If you do not wish to supply your email, or have trouble posting, please email maureen@JustRomanticSuspense.com with a subject title of JRS GIVEAWAY to be entered in the current giveaway. US and CANADA residents only.

Her only hope is in the hands of her enemy.

Slye Temp operative Margaux Duke is chasing an international terrorist who murdered the last of her family. But her plans go up in smoke when her agency is in the crosshairs of the dangerous killer, forcing her to turn rogue to protect the only family she has left - her team.  This is no time to get involved, especially with an enemy who steps between her and the terrorist she has to stop.

Logan Baklanov has been known by many names in the underbelly of international terrorism and will do whatever it takes to shield those he loves from the treacherous world he lives in.   When his brother’s life is in jeopardy, Logan takes on a role that places him at the top of the most-wanted lists of government security agencies in every country.  He accepts the no-win situation, willing to make the ultimate sacrifice until a long legged beauty draws the attention of his deadly target and screws Logan’s carefully planned mission.

Margaux and Logan must join forces in a dangerous game to save a major city from a powerful psychopath, but their ruse escalates out of control when the heat smoldering between them threatens to explode.
Posted by Maureen A. Miller at 12:30:00 AM