Congratulations to "Taurus" and "Kimberly P", the winners in Suzanne's giveaway. Thank you to all who participated.

What I do write is romantic suspense. Fifty percent romance, fifty percent suspense, all woven together. I came to this decision when I realized I really hate plotting out clues and red herrings. The suspense in my books don’t come from not knowing who the nemesis is. Nope, it comes from putting my characters in situations that leaves you wondering, 1) how are they going to solve the problem and 2) are they both going to survive the situation so they can have their Happy Ever After? 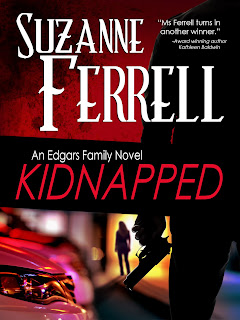 Two things influenced me when I started writing my own books. My love for romance stories and my love of action/adventure books by Robert Ludlum. Mr. Ludlum had such a way of weaving together stories with one, two or three subplots, and turning up the intensity by using shorter paragraphs and quickly changing POV’s as his protagonist got nearer to the danger swirling around him. While in romance you have two characters who do a rather intricate dance, sort of like a tango, until they realize they’ve discovered their soul mate. These two genres meshed with me and I soon found myself using them.

As I worked my way through discovering my voice and “my process” I discovered there was always a dead body somewhere in my books. Even in CLOSE TO HOME, when my heroine and hero are searching for a witness to help in her child custody case, they discover not the witness’ body, but that the man had been disposed of, quite possibly wearing cement shoes in the bottom of the Gulf of Mexico. In CANTRELL’S BRIDE, the book starts out when my heroine witnesses a prominent senator being garroted. To escape the murderer, she becomes a mail-order bride. In KIDNAPPED, the plot revolves around protecting a little boy who witnessed a murder by the head of a Russian mafia cell. See? Dead bodies everywhere. 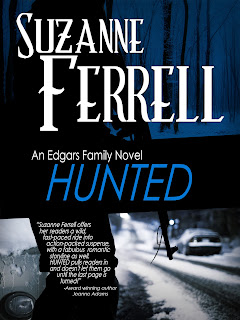 Often times I’ll tell you who the bad guys are. Well, maybe not the truly bad guy, but at least some of his henchmen. In HUNTED, you know from the beginning who the bad guy is, a really creepy cult leader. Here’s the opening to that book:

A cold chill settled in her bones. Fine tremors caused her hands and knees to shake. She dug her fingers into the nylon serge of her borrowed suit.

Once again the judge focused his attention on the silent man before him. “Mr. Strict, do you have anything you wish to say before this court, Sir?”

Tense silence filled the assemblage. Women gripped their husbands’ arms tight. Some spectators waited to hear their prophet speak his last free words. Reporters’ pens paused.
For her, time slowed to an eon. She sucked in air, every muscle in her body tensed for flight. Words can’t hurt me, words can’t hurt me. She silently repeated the mantra she’d practiced for years in her head. She just wished her body believed them as much as her mind wanted it to.
The Marshals moved a fraction of an inch closer, reminding her they were there to protect her. Slowly, she exhaled, sat straighter and lifted her head.

Jacob Strict, the Grand Prophet of the People’s Militia Movement, inhaled deeply. Only five feet eight inches tall, he appeared to double his height with the breath he took—a trick she’d watched him practice in front of the mirror for years. Slowly, he scanned the faces on the jury, his throng of supporters, and then the faces of his victims’ families.

Finally, his gaze locked on hers. His eyes narrowed. He’d lived by one simple code for as long as they’d known each other. An eye for an eye—total retribution, no matter how large or how small the infringement.

She returned his stare without flinching. She’d be damned if she’d let him see her fear. From the moment she’d walked into the police station, half-starved and nearly frozen to death, she’d known her testimony would seal her own death sentence.

After a moment that seemed like an eternity, he spoke. “The chains of this illegal government cannot hold me. Soon I will be free. Then nowhere on this earth will provide safe haven for the traitor among us.”

What you don’t know is, who blew her cover in the Witness Protection program and who the hit-man is that creepy-cult-leader sent after her. In CLOSE TO THE EDGE you get more of a mystery, but long before the end of the book you find out who the crazed killer is, but the suspense doesn’t end there. Nope, not with the hero in mortal jeopardy! 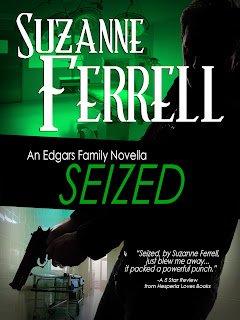 One of my favorite movies is SPEED. Keanu Reeves and Sandra Bullock’s characters manage to fall in love while trying to stay alive in a near impossible situation. Despite the sequel that I thought sucked, I like to believe that the first two characters managed to find their Happy Ever After. So, how do you weave the romance into this kind of book? It’s not like you have a whole year to weave the attraction, longing, lust and sex into the story. In SEIZED the whole book takes place in a night, well except for the first chapter, which is like a long prologue. The key for me is to make the characters sympathetic to the reader. The hero very alpha and willing to go into protection mode. The heroine has her own strengths, but is willing to trust the hero.

So, do you like thrillers? Who-done-its? Do you like mysteries? Or are you like me, want to see the romance heavily mixed in among explosions, chase scenes and dead bodies?

Giveaway:
I’m giving away a signed, printed copy of HUNTED to one reader each day of this post.

Giveaway ends 11:59pm EST Oct. 28th. Please supply your email in the post. You may use spaces or full text for security. (ex. jsmith at gmail dot com) If you do not wish to supply your email, or have trouble posting, please email maureen@JustRomanticSuspense.com with a subject title of JRS GIVEAWAY to be entered in the current giveaway.