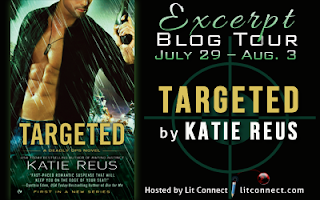 Jack Stone opened and quietly shut the door behind him as he slipped into the conference room. A few analysts and field agents were already seated around the long rectangular table. One empty chair remained.

A few of the new guys looked up as he entered, but the NSA’s security was tighter than Langley’s. Since he was the only one missing from this meeting, the senior members pored over the briefs in front of them without even giving him a cursory glance.

Wesley Burkhart, his boss, handler, and recruiter all rolled into one, stuck his head in the room just as Jack started to sit. “Jack, my office. Now.”

He inwardly cringed because he knew that tone well. At least his bags were still packed. Once he was out in the hall, heading toward Wesley’s office, his boss briefly clapped him on the back. “Sorry to drag you out of there, but I’ve got something bigger for you. Have you had a chance to relax since you’ve been back?”

Jack shrugged, knowing his boss didn’t expect an answer. After working two years undercover to bring down a human trafficking ring that had also been linked to a terrorist group in Southern California, he was still decompressing. He’d only been back a week and the majority of his time had been spent debriefing. It would take longer than a few days to wash the grime and memories off him. If he ever did. “You’ve got another mission for me already?”

Wesley nodded as he opened the door to his office. “I hate sending you back into the field so soon, but once you read the report, you’ll understand why I don’t want anyone else.”

As the door closed behind them, Jack took a seat in front of his boss’s oversized solid oak desk. “Lay it on me.”

“Two of our senior analysts have been hearing a lot chatter lately linking the Vargas cartel and Abu al-Ramaan’s terrorist faction. At this point, the only solid connection we have is South Beach Medical Supply.”
“SBMS is involved?” The medical company delivered supplies and much-needed drugs to third-world countries across the globe. Ronald Weller, the owner, was such a straight arrow it didn’t seem possible.

“Looks that way.” His boss handed him an inch-thick manila folder.
Jack picked up the packet and looked over the first document. As he skimmed the report, his chest tightened painfully as long-buried memories clawed at him with razor-sharp talons. After reading the key sections, he looked up. “Is there a chance Sophie is involved?” Her name rolled off his tongue so naturally, as if he’d spoken to her yesterday and not thirteen years ago. As if saying it were no big deal. As if he didn’t dream about her all the damn time.
Wesley shook his head. “We don’t know. Personally, I don’t think so, but it looks like her boss is.”

“Ronald Weller? Where are you getting this information?” Jack had been on the West Coast for the last two years, dealing with his own bullshit. A lot could have changed in that time, but SBMS involved with terrorists—he didn’t buy it. 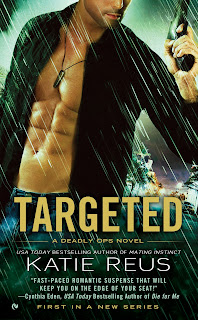 Former Marine sniper and current NSA agent Jack Stone has a new face to go with his new identity. But he still has the same tortured memories—which include the woman he let get away years ago, when they were teenagers. Now his new assignment in Miami will put him so close to the woman he’s never been able to forget, he could reach out and touch her—if only she weren’t under suspicion.

When Sophie Moreno uncovers evidence linking the medical supply company she works for with arms smuggling—and worse—she doesn’t know who to turn to. After a shocking betrayal, she realizes the only person she can trust is a mysterious new person in the company—a man with hauntingly familiar eyes.

As Sophie questions her intense attraction to this man and Jack struggles not to blow his cover, the two of them must race against the clock to stop terrorists from killing scores of people—starting with them.

Meet Author Katie Reus:
Katie Reus is the USA Today bestselling author of the Red Stone Security series, Moon Shifter series and Deadly Ops series. She fell in love with romance at a young age thanks to books she pilfered from her mom’s stash. Years later she loves reading romance almost as much as she loves writing it.

However, she didn’t always know she wanted to be a writer. After changing majors many times, she finally graduated with a degree in psychology. Not long after that she discovered a new love. Writing. She now spends her days writing dark paranormal romance and sexy romantic suspense. To learn more about her please visit her website, blog, facebook or find her on twitter @katiereus.

Giveaway Details:
One US resident commenter per the total number of stops (11) will win one print copy of TARGETED courtesy of the publisher.

One Grand Prize US resident commenter from the entire tour will win a full signed collection of the following books; Danger in Paradise, Protecting His Witness, Alpha Instinct, Primal Possession, Mating Instinct and Targeted.

Please find the Terms and Conditions on the Rafflecopter widget.

Targeted Facebook Event:
Katie will be celebrating the release of TARGETED with her readers and author friends on October 3rd. Find additional information at:  http://events.litconnect.com/facebook-event-targeted-by-katie-reus/