Getting in the Mood for Espionage: Romantic Suspense Movies

Grab some popcorn and raisinettes, head on over to the couch and turn off the lights.  These ten movies bring the heat and keep you on the edge of your seat.

1. Red (2010) Bruce Willis & Mary-Louise Parker.  Frank is an ex operative, Retired and Extremely Dangerous (RED), but he’s also lonely and half in love with Sarah, a call center operator.  When Frank’s past catches up to him, Sarah is caught in the middle.  It’s a great love story and Frank Moses is really a sweet guy for all the damage he can bring.  I’m looking forward to Reds 2.  I missed it in the theaters when it came out.  If you like Bruce Willis he does a pretty good romantic lead in the sci-fi thriller The Fifth Element.

2. Strange Days (1995) Ralph Fiennes & Angela Basset.  Lenny is a burned out, strung out ex-cop whose obsession with his ex-girlfriend is slowly killing him.  Macy, a tough as nails, no nonsense driver has loved him since he saved her son.  But he doesn’t see her as anything but a friend -- until they have to work together to stop whomever is making illegal brain destroying chips.  It all comes to a head on New Year’s Eve 1999 in a kiss that will make you stand up and cheer.  If you like Ralph Fiennes, he does a crisp John Steed to Uma Thurman’s Mrs. Peel in The Avengers.

3. True Lies (1994)  Arnold Schwarzenegger & Jamie Lee Curtis.  Harry is a spy and his long suffering wife, Helen, is dying for an adventure, thinking she has the most boring husband on earth.  When she steps out of her comfort zone, she is smack dab in the middle of a nuclear arms smuggling ring.  The dance at the end is fantastic when Natasha (Helen’s new spy code name) and her husband start a new adventure.  Arnold’s not much for romantic hero, but I loved Jamie Lee Curtis conning and romancing John Cleese’s Archie Leech in “A Fish Called Wanda.”

4. The Thomas Crown Affair (1999) Pierce Brosnan & Rene Russo.  Before he was James Bond, Brosnan was Thomas Crown a bored rich art thief and Rene Russo is the insurance investigator risking her career loving him and trusting him.  If you like Pierce Brosnan (duh) James Bond!!!  But Rene Russo heats up the screen with Mel Gibson in Lethal Weapon Four.  Their banter sends up sparks.

5. Body Heat (1981) William Hurt & Kathleen Turner. Ned and Matty begin a steamy affair and plot to kill her husband.  When Ned bursts through the screen door to take Matty on the porch, I’m surprised the film didn’t catch on fire.  Sultry Kathleen Turner also provided the sexy voice for Jessica Rabbit in Who Killed Roger Rabbit.

6. The Big Easy (1987) Dennis Quaid and Ellen Barkin.  Remy McSwain isn’t a dirty cop.  He just isn’t squeaky clean.  District Attorney, Ann, is out to get him for taking bribes, but it looks like the corruption charges are a smokescreen to the killings that are going on in town. My favorite lines:  Ann:  I’ve got no luck with sex. Remy: (all Louisiana drawl) Well, you’re luck’s about to change.  Ellen Barkin also smolders with Al Pacino in The Sea of Love.

7. Tequila Sunrise (1988) Mel Gibson & Michelle Pfeiffer (and a little bit of Kurt Russell thrown in)  This cracktastic triangle has Jo Ann more interested in the bad guy Mac – who is a drug dealer trying to go clean than in his old friend and police detective Nick.  Raul Julia steals the show with the line “You fuck like an Olympic champion.  Four Hours!  I got hungry just watching!  These men out here are hoping their wives don’t find out about this.”  Mel Gibson was wonderful with Julia Roberts in Conspiracy Theory as a wacko who is utterly devoted to Anne Sutton, the daughter of a man he greatly admires.

8. Speed (1994) Kenau Reeves & Sandra Bullock.  Die Hard on a Bus.  Policeman Jack tries to keep a bomb from exploding on a bus that’s being driven by Annie.  Whoa!  I also like Kenau Reeves’ Neo and Trinity’s love story in the Matrix series.

9. Bound (1996) Gina Gershon & Jennifer Tilly.  Whoa is right.  The chemistry between these two is palpable.  Corky, an ex con trying to earn a living as a plumber wonders if she’s just a patsy for Violet who’s looking to steal two million dollars from Caesar, her lover.  Jennifer Tilly is a world class poker player.  She won the world series of poker in 2005.  She often wears distracting low cut blouses and a push up bra.  But she says only amateurs are distracted by that. The only pair a professional poker player is interested is a pair of aces!

10. Eastern Promises (2007) Viggo Mortensen & Naomi Watts.  Russian mob player Nikolai is working his way up the power grid, but the vory v zakone could be taken down by a midwife named Anna who is given a diary from one of her patients – a sex trafficked girl.  Viggo in the Fellowship of the ring was very dashing as Aragorn, in love with his Elvin princess, Arwen.

I was inspired by Eastern Promises to write my romantic suspense novella, Undercover Lover.  When Reiki therapist Pamela Krupin is attacked by thugs who work for her client, a Russian mob boss, the boss orders his godson, Detective Drake Logan, to protect her. Their attraction flares across Pamela's line in the sand: She will not violate her patient's confidentiality. But when Drake's godfather is murdered and Pamela is targeted, together they have to find out what the mob is really after.

So what are your favorite romantic suspense movies? 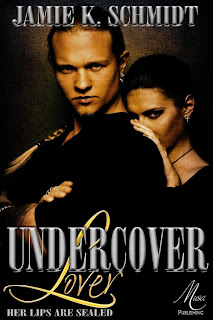 Jamie K. Schmidt has over thirty short stories in publication. Her romantic suspense novel UNDER-COVER LOVER, published by Musa Publishing, will be released September 13, 2013. THE QUEEN’S WINGS, book one of the Emerging Queens series, a paranormal dragon romance will be published by Entangled's Edge line this fall. Book One of her contemporary romance series, INNER GODDESS, will be published by Random House's Loveswept line June 2014.

Jamie holds a Bachelor of Arts Degree from the State University of New York at New Paltz in Second-ary Education English. She’s also held various jobs as a call center manager, a Tupperware consultant, a paralegal, and finally a technical writer for a major corporation. She is an active member in the Romance Writers of America (RWA), serving as the President for her local chapter Connecticut Romance Writers of America (CTRWA). www.jkschmidt.com