Where in the world is Maguire’s Corner?

Congratulations to "Jane", the winner of Heather's giveaway. Thank you to all who participated! 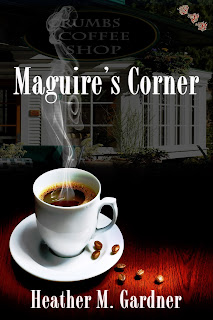 Maguire’s Corner is a fictional town loosely based on a real place. Well, more like numerous real places that I hacked and slashed then combined to make one kick-ass-town.

For years, I had passed this tiny, old schoolhouse in a tiny, old hamlet with a giant, old Irish name. (Not Maguire.)

My imagination, which often gets the best of me, began to create an entire bustling metropolis around this stone schoolhouse where a large number of the population would all be related.

It’s got it all. Historic downtown mixed with urban chic. Small-town America feel meets a rich cultural atmosphere. Who wouldn’t want to live there?

The Maguire family is fun, noisy and way over-extended. They own and run some of the best establishments in town and spend a lot of their time volunteering in the community.

All in all, I wanted Maguire’s Corner to be a place that everyone wanted to visit and maybe never leave.

Have you ever wanted to move to a fictional town?

Coffee shop owner Maggie Maguire doesn’t trust the new police chief her father hired to protect Maguire’s Corner. He’s a stranger, cold, bossy and annoyingly handsome. But, Maggie’s witnessed a serious crime and now someone’s trying to kill her. The man that aggravates her most might be the only one that can help her.

Police Chief Jack Munro likes his new job and his new town, and unfortunately he also likes the stubborn but beautiful town sweetheart. His self-imposed hands-off Maggie policy is about to be put to the ultimate test when he must keep her close to protect her while he tracks down a ruthless killer.

Determined to ignore Jack’s charms, Maggie attempts to help him unravel the mystery but when their lives hang in the balance she must decide how much she’s willing to risk to save the man she suddenly can’t resist.
***
Maguire’s Corner Excerpt
For a while, Maggie’s room was busier than Main Street during the annual summer float parade. When Kristen and her torture devices left, Bobby came back with a notebook and she began to document everything that happened.

Kristen returned and helped her walk her to the bathroom to clean up her face. The injury didn’t seem nearly as bad once the dried blood was washed away. Together they managed to get most of the glass out of her hair.

Finally, Kate came back to give Maggie some medication to help her sleep but every time she moved, the pain from her cracked rib would wake her.

Bleary eyed, she spotted someone in the chair next to her bed. Part of her brain warned her it could be the man from the SUV but another part easily recognized that long, solid frame dwarfing the hospital furniture.

Chief Jack Munro was sitting in the chair with his eyes closed. He looked like a statue, all stiff and formal, just like when he was awake, she thought.

However, Jack was actually quite nice to look at when he wasn’t glaring down at her. He had a strong face and jaw with a straight defined nose placed evenly between eyes that when open, were an ice cold blue.

Those eyes could stare holes right through your brain when he was searching for answers. His coal black hair was cut almost military short, but it suited him. Even his lips were nice, not too thin and not too full.

Jack’s eyes opened, cleared and locked onto hers.

Giveaway:
Heather will be giving away a digital copy of Maguire's Corner

Giveaway ends 11:59pm EST Aug. 19th. Please supply your email in the post. You may use spaces or full text for security. (ex. jsmith at gmail dot com) If you do not wish to supply your email, or have trouble posting, please email maureen@JustRomanticSuspense.com with a subject title of JRS GIVEAWAY to be entered in the current giveaway.