Congratulations to "Kristen R." and "Taurus", the winners in Susanne's giveaway. Thank you to all who participated!

Have you ever been so angry that you swore you’d get even? Have you ever gotten even with someone? Did you actually feel better? Douglas Horton said, “While seeking revenge, dig two graves - one for yourself.” When I started to write In Plain Sight, I wanted to write a story where revenge was the ultimate motive, where the need to get even overshadowed everything else.  In Fire Angel, my first book, all the efforts went into finding one killer, albeit, a nasty fellow for sure, and one bent on revenge for what he perceived where injustices. The theme had worked well, so I wanted to use it again. 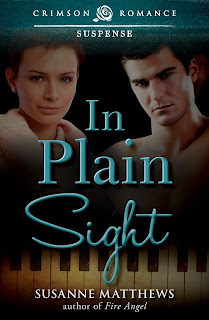 I watch crime fiction, and I follow the news. There was a program out last year where people were placed in the Witness Protection Program, and for one reason or another, their covers were blown, or they opted out. The idea of having to leave everything behind and start a new life as someone else fascinated me. Years ago, Julia Roberts starred in a movie, Sleeping with the Enemy, where she faked her own death to escape an abusive husband. I took these two ideas and combined them to come up with In Plain Sight.

According to Samuel Johnson, “Revenge is an act of passion; vengeance of justice. Injuries are revenged; crimes are avenged.” Misty Starr, my heroine, runs away from an abusive husband who happens to be part of the mob. When her testimony forces the mob boss out of the U.S., he puts out a contract on her—she’s ruined his life, his career, and taken all that is dear to him. He won’t let up until he sees her dead. His need for vengeance is an act of passion.

Nick Anthony, a former concert pianist and CIA courier, lost his vision in an accident. He felt guilty and blamed himself. His blindness is what he considers atonement for his failure to protect the innocent. He suffers from conversion disorder, an emotional illness that shows itself in neurological symptoms—in Nick’s case, he can’t see. When he hears Misty sing, he’s taken with her voice and fascinated by the woman. He wants to get to know her, but when her house burns down and he realizes she’s terrified, he’ll do everything he can to keep her safe. He’ll atone for his sins by saving another innocent. How he convinces her to trust a blind man with her life is the stuff stories are made of!

In Plain Sight was released August 12, 2013 and is available at all e-book dealers

About In Plain Sight:

In life, you pay a price for everything you do. Widowed, her dream of starring on Broadway in ashes at her feet, Misty Starr yearns for a happy, healthy, normal life for herself and her four-year-old daughter, Debbie. Settled in Pine Falls, NY, a sleepy little town filled with friendly people, she believes she’s found it and feels safe enough to sing in an amateur theater revival of Jesus Christ Superstar. She’ll do anything to keep this life even if it is built on lies, because revealing her secret is impossible. When Nick Anthony joins the cast as music director, Misty is attracted to the man who stirs up feelings she thought long dead, but can love grow on a bed of deceit?

A former concert pianist and secret CIA courier, Nick lives in darkness ever since the accident that killed his wife. The doctors say there’s nothing wrong with his vision, so why can’t he see? Hiding from his former life, he reluctantly agrees to help with the musical and is drawn to the young singer with the voice of an angel. When a mysterious fire destroys her home, Nick vows to keep her and her daughter safe. After one suspicious event leads to another, Nick is determined to protect them from an unknown assassin, but in order to do that, he needs to know her secrets. With his money and connections, he'll do whatever it takes to save the woman he loves, but does she love him enough to reveal the truth?

Excerpt from:  In Plain Sight

Misty had been living in Pine Falls for eight months now, and she really didn’t want to move again. She and her daughter Debbie were happy here. This man was a stranger, and strangers spelled danger. For more than four years, she’d run from relationships and people, including confident, powerful men like this one, avoiding friendships and commitment. She’d kept to herself, believing that if she did, she’d be safe. It hadn’t worked, and good people had died. What made her think stepping outside the box to become a member of this community and make friends here would be a wise thing to do? At the moment, it looked as if she might have made a colossal error.

Her mind focused on the present and the gorgeous stranger who reminded her of a sleek black cat, whose stormy, gray-blue eyes seemed to look right through her. She shuddered. This man was dangerous. He walked with the grace and ease of a panther on the prowl, wary of everything and everyone in the room. He might look like he could purr under the right circumstances, but at the moment, it was more likely he’d rip your throat out if he got the chance.

Micah walked over to the center of the room with the stranger following close behind him. She wanted to look away, but she couldn’t seem to get her eyes to cooperate with her brain. She was like a moth drawn to the flame, unable to escape its destiny.

“Ladies and gentlemen,” Micah said as he and the newcomer approached the center of the room, capturing the attention of the female cast and the men who’d filed into the dressing room. “I have some good news and some bad news for you tonight.” The cast gave a group groan. It seemed as if this musical was cursed; they’d been practicing since September, and every time they thought they had some glitch worked out, something else went wrong. In fact, it had been one of those minor disasters that had resulted in Misty’s joining the company.

She shook her head and tried to focus on what Micah was saying because the man beside him worried her. Who was he? What did he want? Why was he here? The fear she’d cultivated all these years ate at her.

About the Author:
Susanne Matthews grew up as an avid reader of all types of books, but always with a penchant for happily ever after romances. In her imagination, she travelled to foreign lands, past and present, and soared into the future. Today, she has made her dreams come true. A retired educator, she now gets to spend her time writing, so she can share her adventures with her readers. She loves the ins and outs of romance, and the complex journey it takes to get from the first word to the last period of a novel. As she writes, her characters take on a life of their own, and she shares their fears and agonies on the road to self-discovery and love.

You can learn more about Susanne at http://www.mhsusannematthews.ca

Giveaway:
Susanne will be giving away a digital copy of IN PLAIN SIGHT to 2 people leaving a comment or email entry.

Giveaway ends 11:59pm EST Aug. 23rd. Please supply your email in the post. You may use spaces or full text for security. (ex. jsmith at gmail dot com) If you do not wish to supply your email, or have trouble posting, please email maureen@JustRomanticSuspense.com with a subject title of JRS GIVEAWAY to be entered in the current giveaway.
Posted by Maureen A. Miller at 12:30:00 AM