When plotting a book, I always expect that somewhere along the way there will be a problem. I’ll get stuck, I’ll plot myself into a corner and I’ll have to wrestle my free-wheeling ideas into some form of usable material.

I don’t get nervous when this happens. For me, it’s a natural part of the process. It forces me to push myself. To make the work a little grittier or maybe more lighthearted. 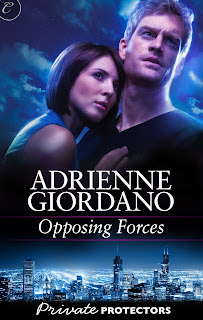 While writing OpposingForces, I encountered an issue like never before. This was the monster of all issues. It was big and mean and spitting. And it had sharp teeth.

Okay. Maybe I got carried away there. It didn’t have sharp teeth.

But this was definitely a problem that could change the course of my story. You see, my hero, a guy who’d made appearances in the preceding Private Protectors books, a guy the Taylor Security operatives considered their go-to person, a guy who finessed government officials like a master, well, he didn’t have a first name.

My go-to person in each Private Protectors book had simply been referred to as Lynx, which was his last name. Originally, Lynx was simply meant to be a minor character who popped in to help. During the plotting process, I do character sketches for all major and some secondary character’s, but because I’d never intended to give Lynx a book of his own, I never did a sketch for him.

Then I got curious about him. As my curiosity grew, I decided he needed a story of his own. And when a character gets a story of their own, they need a first name.

My problem was that I had too much history with Lynx. I knew him, but I didn’t know him. I wanted a special first name for him. Something a little slick, but traditional. I spent weeks searching name books and baby naming sites, but couldn’t come up with the perfect name.

I finally realized I was too close to it and did the only thing a writer could do. I turned to my readers and asked them what first name they’d give Lynx. The suggestions started flying in. They were all great names, but I hadn’t seen THE ONE. Then, on the same day, I received two suggestions that I thought could be THE ONE. One was Brent and the other was Jackson.
Brent had a sense of strength to it, but Jackson kept grabbing my attention. I played with it. Let it roll off my tongue. Jackson. I liked that it had a formal feel. In my mind it spoke of tradition. A family name maybe. Then I shortened it.Jack Lynx. My heart went pitter-patter asI pictured my guy walking into a meeting, shaking hands, schmoozing his way to whatever goal had been placed before him.

I sat back, stared at my handwritten notes and said “Oh, Jack Lynx, how I love you.”

And that did it. Decision made. Part of me still thinks of Jack as “Lynx”. I can’t help that. I created him as Lynx and I wrote five stories with him as Lynx. But then there’s that other part of me. The part that knows he wasn’t complete until he became Jackson.

Readers, what is your favorite name for a character?

Bio: Adrienne Giordano writes romantic suspense and mystery.  She is a Jersey girl at heart, but now lives in the Midwest with her workaholic husband, sports obsessed son and Buddy the Wheaten Terrorist (Terrier). She is a co-founder of Romance University blog and Lady Jane's Salon-Naperville, a reading series dedicated to romantic fiction.