WHAT IS THE ONE QUESTION AUTHORS HATE TO BE ASKED?

Congratulations to "Amy A." and "Jackie M.", the winners in Dianna's giveaway. Thank you to all who participated!

I heard a well-known author speaking at a recent event say that the one question an author really doesn’t like to be asked is, “Where do you get your inspiration?” 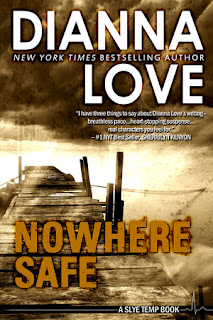 I wanted to hold up my hand and say I don’t mind being asked that, because I remember my “pre-author” days of wondering what caused an author to write a particular story.  In fact, I actually enjoy discussing those things with readers.

So I thought I’d give you an idea of where some of my ideas come from.

Picture this: I’m  sitting in a lunch restaurant, minding my own business (as much as any writer minds her own business).  I’m trying to type a message on my phone and swearing silently at the auto-correct, when I hear something that escapes a private conversation—something said a tad too loudly.  No, I was not eavesdropping.  Not this time. *grin*

A nice-looking, late-twenties blonde woman is sitting two tables over.   She says in a raised voice, “What am I supposed to believe?  The letter or that guy?”  Her brunette friend hushes her in the patently conspiratorial tone of one who has just heard the mother of all gossip.

Now, the referenced letter might have informed our rattled blonde that the bank can’t refinance her house for the amount she desperately needs, and that guy could be some shyster mortgage broker who’s trying to convince her to take a loan with his company.

But for me, this outburst offered a story possibility.  It distracted me to the point that I forgot what text message I was trying to convince my crazy cell phone to type.

Blondie was obviously in a panic and at wit’s end, but why?  That was the moment I went off into What If Land, a fiction writer’s favorite amusement park where characters walk on scene ready to play.  Being a romantic thriller author, I went straight to that dark place where the combination of suspense and romance germinates.

What if … the man Blondie had been married to for the past two years had disappeared—before she could finalize the divorce she’d instigated because she was sure he’d been having an affair?  But then what if she receives a letter from her not-yet-ex husband, who apologizes for all the trouble he’s caused her?  He admits that he was never in love with her, but for what it’s worth, he never cheated on her while they were together.

He goes on to say he was in this country for a reason and needed a cover that included being married.  The good news is that he’s left her money to make up for using her,  as it was only business for him.

The bad news?  If she was reading this letter, then he was dead and she was in danger.  She should go immediately to the FBI and ask to be put into the WITSEC program.

She’s in shock, but starts throwing clothes into a suitcase and trying to figure out how she’s going to walk away from her life.  What can she tell the FBI to convince them to protect her? She has no idea who her husband really was or if he is truly dead. She stops packing, at a loss for what she should do. Would the FBI believe the letter, or would they think she had killed him and was trying to cover her tracks with the wild claims?

Then what if someone knocks on her door and she freezes? Could that be a threat?  She looks out a slit in the living room curtains to see who it is and doesn’t recognize the man standing at her front door. She’d remember someone that attractive and so much more imposing than her husband—correction…ex-maybe-dead husband—but when the stranger swings his gaze in her direction as if he could feel her watching him, she sucks in air at the deadly blue eyes staring at her.  She shakes herself loose and runs to the bedroom to grab her shoulder bag, abandoning her suitcase and racing through the house to the kitchen.

What if the front door opens with that high-pitched squeak she’d been meaning to oil? Blondie snatches up her keys on the fly and dives through the garage access door in the kitchen, only to realize the stupid garage door was still stuck open a foot off the ground. Footsteps pound behind her. She runs toward the garage door wondering if those extra pounds are going to stop her from squeezing under.  The door to the kitchen slams back against the wall and a deep voice yells, “Don’t be a fool and run.”

Blondie feels like a bad actor in a B action movie when she drops to the ground to roll under the overhead door.  She can’t stop herself from risking a glimpse at her pursuer as she scoots through the narrow gap.  The man coming for her is all of her worst fears rolled into one. The last thing she hears before clearing the space she knows he can’t get through is, “You’re a dead woman if they catch you or you go to the police.”

Now she sits in a coffee shop, frantic to come up with a plan and expecting tall, dark and scary to come busting in at any minute.

And that’s just one of the rides in What If Land.

I love living in this world.  It’s where I go when I’m writing my Slye Temp romantic thriller series.   The inspiration for NOWHERE SAFE came along when I was writing about the hero’s sister, Trish, in the prequel to the series, LAST CHANCE TO RUN.

I knew I wanted Trish to run an antiques store in a high-end area of south Florida.  So I was meandering through a real antiques store in Atlanta to get a feel for the setting when I glanced up at the TV behind the sales counter and there was a reality show on.  I poofed instantly into What If Land.

What if there was a reality show based on antiques appraising … and what would happen if there was a rare piece that would bring in an international threat?  And, what if the hero in the story was working undercover at the DEA Task Force where Trish’s cargo-pilot brother contracted because of his military training? And … what if the hero was there to uncover a mole, and suspected Trish’s brother of being the traitor?

And … there I went again.

What about you?  Have you ever unexpectedly poofed into What If Land?


Giveaway ends 11:59pm EST May 22nd. Please supply your email in the post. You may use spaces or full text for security. (ex. jsmith at gmail dot com) If you do not wish to supply your email, or have trouble posting, please email maureen@justromanticsuspense.com with a subject title of JRS GIVEAWAY to be entered in the current giveaway. US and CANADA postal addresses only.
Posted by Maureen A. Miller at 12:30:00 AM