Congratulations to "Nancy G.", the winner in Stacy's giveaway.  Thank you to all who participated!

Admit it. We all have stopped reading a book at least once because a heroine succumbed to danger–usually because of her own poor and irrational decisions–and needed to be rescued. It’s an overused theme in romantic suspense.

Perfect example: Claire in Fox’s The Following. She’s the mom whose son has been kidnapped by the serial killer dad and his nutball followers. The FBI and hero Kevin Bacon (only reason I am still watching, but that’s another topic) are doing everything they can to keep her safe and recover her son. But Claire repeatedly ignores their orders, tries to take things on her own, and plays right into the bad guys hands. She’s now reunited with her son, but she’s also at the mercy of the cult and Shakin’ Bacon will have to save her.

Ugh! Every week I am hollering at that woman. As a mother, I get it. But as a viewer who wants to see smart, strong women, I’m wanting to strangle her.

And this is something we see in romantic suspense a lot. Sometimes it works, but often it’s what results in disappointed readers who may have loved the plot but couldn’t stand the heroine.

So what’s the key to tossing the damsel in distress out the door?

Turn the cliché on its head. Plenty of my favorite writers put their heroines in peril, and sometimes I get so mad I want to scream, but the redeeming quality is that the heroine managed to get herself out of trouble. She didn’t sit around waiting for someone to rescue her. Lisa Gardner is great at this. So is Erica Spindler.

Believe me, it’s not easy. In my second novel, TIN GOD, heroine Jaymee Ballard is a poverty-stricken woman who believes her child was the victim of an illegal adoption. She’s desperate to find the child, but her only ally was murdered four years ago. Then, her last hope winds up in a puddle of blood, too. So Jaymee’s back is against the wall, and she needs help.

Fine. But that doesn’t mean she has to wilt like a damsel in distress. She’s still willing to carry her own burden, and part of her character arc is learning to share that burden. But what makes Jaymee work is that she is always responsible for herself. She doesn’t expect a rescue, and in the final harrowing scenes of the book, she does everything she can to make sure the bad guy will be caught, even if he succeeds in his mission.

Jaymee is a character I fell in love with, and even though she isn’t the heroine in the second Delta Crossroads book, her voice is so strong she still plays a vital role.

A snippet from Jaymee and TIN GOD:

“And what lifestyle would that be?” Jaymee whipped around to face him. His crooked mouth warped into a sneer, and she felt the familiar stab in her heart. Why did he hate her so much? She couldn’t remember a time when he didn’t look at her with scorn.

“Living out there with the damned city trash. I’m sure you’re in the same line of work as your friend. After all, once you’ve allowed your body to be used, what’s the difference? Might as well make some money off it, right?”

“That’s enough, Paul,” Gereau said. “You wanted to know why she came to work in the police car. You got your answers. Let’s leave before this escalates further.”

She’d heard this all before. The repetitiveness should have dulled the pain, but the words sliced through the layers of armor Jaymee had built around her heart. Her lips shook as her eyes began to fill. Then she saw the corner of her father’s lips perk up. He was enjoying this. She chewed back the sob and responded with as much venom as she could muster.

“I don’t prostitute. Not that you care.”

“I don’t. I gave up on you a long time ago. But I won’t allow you to drag my family back into the mud. You almost gave me a heart attack back then. Trying to kill me now?”

“All I did was tell the church what a hypocrite you are. But one day, Dad,” Jaymee emphasized the word with thick sarcasm, “the truth will come out. Life has a way of making things right. Don’t you agree, Reverend Gereau?”

Gereau took a step back as though Jaymee pushed him. Deep creases lined his forehead as he searched her face, presumably looking for some sort of forgiveness. She didn’t have any left. 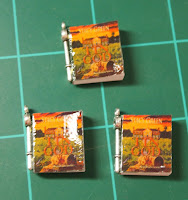 So what about you? Who are your favorite female characters and why? Stacy is giving away some swag items to one lucky commenter!

Giveaway ends 11:59pm EST April 16th. Please supply your email in the post. You may use spaces or full text for security. (ex. jsmith at gmail dot com) If you do not wish to supply your email, or have trouble posting, please email maureen@justromanticsuspense.com with a subject title of JRS GIVEAWAY to be entered in the current giveaway. US and CANADA postal addresses only.