Congratulations to the "Kai" and "Bn100", the winners in Terri's giveaway. Thank you to all who participated!

You ever wonder what it is about certain characters that suck us right in? You know, the ones that have a certain indefinable quality that jumps off the page and traps you in their story?

I admit that I’m a reader who prefers to be grabbed from page one. And if I’m not equally grabbed by the characters – okay, the male ones, in particular – that’s pretty much a guarantee that I’ll stop reading the book and move onto another one. I know that sounds kinda snobby, but that’s not my intention really. It’s just that there are male protagonists that stand out in the crowd and stick with you for a really long time.

Over the years, I’ve been enamored by a few male characters. Joe Pike and Elvis Cole (Robert Crais). Wrath (JR Ward). Ranger (Janet Evanovich). The thing about these guys is that they all have dark side, though some darker than others. And in the time I’ve been writing, I’ve managed to give birth to my own male character that I lust for. Maybe part of it is because he’s a product of my own imagination, so he’s about as perfect (for me) as a male lead can get. Maybe it’s because I can do with him whatever I want. (Ahem.) Maybe it’s because, no matter how much I know about him, there’s an enigmatic part of him that I’ll never understand. Things about him I’ll never know. Dark stuff he’ll never share. 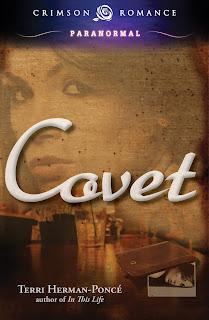 His name is David Bellotti. An alpha male with shortcomings and flaws, he’s driven to single-mindedness sometimes but he’s also completely devoted to the love of his life, Lottie. In fact, one of the things I love writing most about David is his love affair with Lottie, and the challenges they face that make them grow stronger as a couple. The other thing I love to write for David is his relationship with his mother. She’s eccentric and quirky, a mother who worries about her son and more than keeps him on his toes.
David is the protagonist in my recently released paranormal suspense, Covet. And, if I’m lucky, he’s the guy I’m going to keep writing about for as long as I can.
Here’s a snippet of who David Bellotti is, from Covet:

I sat in my SUV in my driveway, staring at the ass end of my mom's Mercedes and wondering what I'd done to deserve the penance after a long trip back from Turkey. Mom was great but we had a strange relationship. It was supportive and open, but it sometimes bordered on the bizarre. Back in the sixties, Mom went to Woodstock. She never returned. Still dressed like she was there, too. And she took a lot of what she experienced that weekend and incorporated it into her subsequent career as a sex therapist, using any opportunity to offer advice. Alone, in front of my friends, near strangers, it didn't matter. That made for lots of awkward moments and too many memories I'd rather repress, and if it weren't for her genuinely good heart, I probably would have gone into therapy a long time ago.
I edged past the Mercedes and pulled into the garage, knowing this would go down one of two ways. Either both she and Lottie were deep into a bottle of wine and sharing too much information about me, or they were commiserating about life as therapists and sharing too much information about me.

Either way I was screwed.

I killed the engine, grabbed my duffel bag, and hefted it into the laundry room just off the garage door. I dropped it on the floor, opened the door to the kitchen, and halted, preparing for the onslaught. I heard Lottie laugh, my mother said my name and something I couldn't understand, and Lottie laughed even louder. I sighed. Yep. Definitely screwed.

So what about you? What are your favorite male characters, and why? I’d love to know.

LEAVE A BLOG COMMENT. Terri will draw from blog commenters for TWO e-copies of COVET (she'll need your email address, which you can send to her directly.)

TERRI-HERMAN-PONCÉ looks for any opportunity to make stuff up. Born on Long Island, New York, she thinks anything that can’t so easily be explained is worth an extra look and often makes a great story. She loves red wine, sunrises, Ancient Egypt, and the New York Yankees. The youngest of five children, Terri lives with her husband and son on Long Island. In her next life, if she hasn’t moved on to somewhere else, Terri wants to be an astronomer. She’s fascinated with the night skies almost as much as she’s fascinated with Ancient Egypt.

Terri is a member of Sisters in Crime, Mystery Writers of America, and Romance Writers of America. You can read about Terri and her stories at http://terriponce.com/ and can find her on Twitter (@TerriPonce) and Facebook.

Giveaway ends 11:59pm EST April 9th. Please supply your email in the post. You may use spaces or full text for security. (ex. jsmith at gmail dot com) If you do not wish to supply your email, or have trouble posting, please email maureen@justromanticsuspense.com with a subject title of JRS GIVEAWAY to be entered in the current giveaway.