Thanks so much to Just Romantic Suspense for having me here today! Breaking Her Rules, the sixth story in my Red Stone Security series just released and I’m excited about its release for multiple reasons. Of course I’m always excited for any new release, but this one not only features the first female RSS agent as a lead, it has one of my favorite themes: reunited lovers. 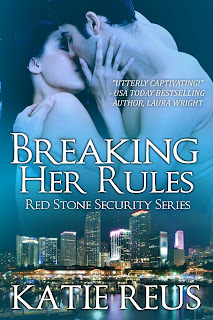 I’ve always adored the ‘reunited lovers’ theme in romance, regardless of subgenre. The romance always starts off with tension because there had to be a reason these two lovers couldn’t make it the first time. Sometimes it’s something as simple as they were too young to know what they wanted in life. Or, the families of the couple tore them apart. Maybe time and distance proved to be too much. Secrets, lies or insecurities managed to cut through their relationship. One of the characters thought they were protecting the other by walking away … Whatever the reason, the couple once loved each other, or cared deeply for each other, and now they’re finally getting their second chance! I’m such a believer in second chances so that’s probably why I love the theme.

With Iris and Wyatt, the two main characters in Breaking Her Rules, they have a long history but only very recently before the story actually starts did they cross the line from friends to lovers. So while this isn’t a decade’s long separation, these two still need to work through their issues.

What about you? What are some of your favorite themes in romance? In addition to reunited lovers, I also enjoy beauty and the beast, and friends to lovers (which is another underlying theme in BHR!).

Iris Tarango is a small-town girl from the wrong side of the tracks; she’s also a decorated former Marine who fought hard to become one of Red Stone Security’s most respected agents. But her perfectly ordered life is turned upside down when she’s assigned to guard the sexy, dominating tycoon she shares a secret history with. The instant Iris walks back into the billionaire’s diamond-studded orbit, the wild attraction flares between them…and her reputation, objectivity, and heart are in trouble. 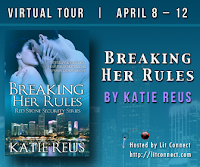 After an attempt on his life, business magnate Wyatt Christiansen calls in major favors to hire Iris as his bodyguard. He knows she’s the best, though he has another motive, too. He sees this as his final chance to win her heart. But when danger spins out of control, all Wyatt can think of is getting Iris out of harm’s way—even if it means losing her love in the end.

Unfortunately, the killer seems to know their every move. If Wyatt and Iris don’t figure out who put out the hit, they’ll lose more than their chance at happiness together.

Meet Author Katie Reus:
Katie Reus fell in love with romance at a young age thanks to books she pilfered from her mom's stash. Years later she loves reading romance almost as much as she loves writing it. However, she didn't always know she wanted to be a writer. After changing majors many times, she finally graduated with a degree in psychology. Not long after that she discovered a new love. Writing. She now spends her days writing dark paranormal romance and sexy romantic suspense.

Giveaway Details:
Katie is offering up 5 backlist ebooks from her Red Stone Security series (one per the number of stops). The winner can choose from the first five installments as their choice for their prize. The contest is open internationally, entrants must be 18 years of age, and will run from 12:00am EST 4/8/13 – 11:59pm EST 4/15/13. Winners will be randomly selected and notified via email, as well as displayed on the Rafflecopter widget within 5 days close of the tour. Full terms and conditions can be found on the widget.