Congratulations to "Missy E" the winner of Anne's giveaway. Thank you to all who participated!

Firefighters are the ultimate heroes, putting their lives on the line on a daily basis to keep us safe. So what happens when a firefighter goes bad? Evan and Faye race against time to track down and expose a firefighter arsonist in Slow Burn (Kensington Brava, April 2013). As part of my research for the book, I looked into firefighter arsons. Arson already accounts for a tremendous portion of wildland fires in the U.S.

Law enforcement has developed a descriptive profile of the firefighter arsonist that fits many of the recent cases. He (and the arsonist is almost always male) is typically:

While money plays a part in the arsons (there’s no paycheck if there are no fires to put out, and overtime puts even more money in a firefighter’s pocket), money is by no means the main motivating factor. Firefighter arsonists, because they are younger and inexperienced, are eager to go out there and get that experience. They want to ride the truck and can’t wait for the call to come in. Every fire is a good fire to them—and, when Mother Nature doesn’t provide, they set their own. 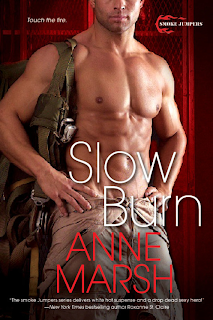 Evan Donovan is a big muscled giant of a man, whose size and strength make him uniquely qualified to be a smoke jumper. No matter how great or how treacherous the challenge, he gets the job done. But when he agrees to look in on a friend’s ex-wife after a suspicious brushfire, Evan learns that some jobs are too hot to handle.

Faye Duncan is a photographer on a mission, shooting fires for a magazine. But her first encounter with a wildfire isn’t nearly as wild as her first night with Evan Donovan. The moment she meets the bigger-than-life hero, the sparks begin to fly. But things really catch fire when Evan learns she may have taken a photo of the arsonist setting the fires. Evan is determined to keep Faye safe. But if he expects her to trust him with her life, he’ll have to open up his heart—even if someone gets burned…

Excerpt:
The beer was real cold, a Budweiser pick-me-up while Hollis waited for the show to get started outside. Mimi hadn’t asked questions when he’d come in, so he’d ordered up the Bud and waited. Nothing unusual about banging one back at Ma’s. Still, Mimi was watching him. He’d ditched the drip torch outside her door, but he definitely smelled like kerosene and smoke. That happy little stink could be on the up and up, though, so she was hanging back right now. She’d put two and two together in the next five to ten, however.

Right on cue, fire alarms blared to life outside the bar’s front doors. Showtime. He started pulling money from his pocket, because he might set fires, but he paid his bar tab.

“On the house,” Mimi growled, and she ran for the door. She’d definitely gotten the 411 on fire safety, because she felt the knob before she decided the metal was cool enough, and she flung the door open. Yeah, he’d lit up the firehouse parking  lot good.

A car horn went off, singing a swan song, accompanied by small pops like bullets firing. Two of the three cars were fully engulfed now, and smoke shot up in black streams that faded to gray as they became airborne. The stink was bad now, because something plastic had caught, and there was plenty of orange. The added bonus was the wind lending a helping hand, spreading fire from A to B with each hot breath of air.

Mimi cursed, whirled around, and came right back inside, grabbing the land line beneath the bar. As she punched buttons and placed a call, he grabbed a bowl of peanuts and another beer. Popping the top, he headed for the still-open door. Shutting it on her return trip would have been a smart move for Mimi, because now his fires were pouring smoke into the bar, and she’d have one hell of a Febreze job on her hands.

Behind him, Mimi slammed down the phone. “What do you think you’re doing, Hollis Anderson?”

He gave her the truth. “I’m getting me a ringside seat.”

Hollis Anderson isn’t playing by the rules—and it’s up to Evan Donovan and Faye Duncan to stop him... before anyone gets hurt.

I hope you enjoyed this small taste of Slow Burn. Share your thoughts with me—one lucky reader who comments on this blog will be randomly chosen to win a signed set of Smoke Jumper books.

Want to read more or to chat with me? Please visit me at www.anne-marsh.com.
You can also find me on Twitter (@anne_marsh) and Facebook.

Giveaway ends 11:59pm EST March 25th. Please supply your email in the post. You may use spaces or full text for security. (ex. jsmith at gmail dot com) If you do not wish to supply your email, or have trouble posting, please email maureen@justromanticsuspense.com with a subject title of JRS GIVEAWAY to be entered in the current giveaway. US and CANADA only.
Posted by Maureen A. Miller at 12:30:00 AM